It was love at first hearing. The music was glorious, the conducting bouncy and pointed, and the singers sure sounded terrific to me. 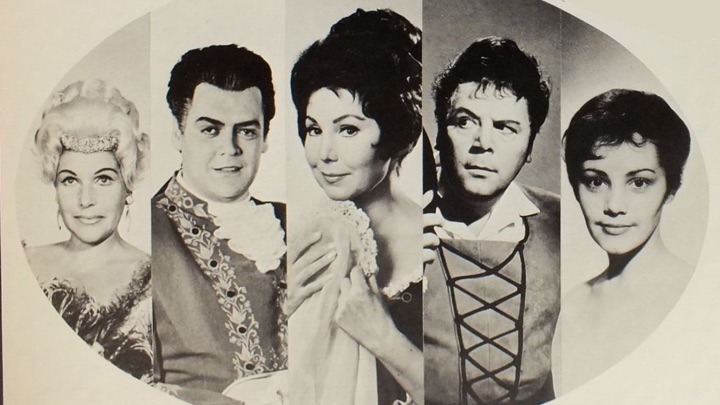 My first live opera was an English language Bartered Bride. I attended through an elementary school field trip in November 1964, and I’d looked forward to it for months, since it also meant a bus ride downtown, which was some distance from my suburban home. Anyway, the whole thing felt very glamorous.

I’ll admit, though, that I was disappointed to be seeing a work I’d never even heard of—by then, I knew at least a handful of operas by title (Carmen, Bohème, Marriage of Figaro).

I don’t retain much memory of the show. The magic of the internet has allowed me to fill in the blanks, and from my perspective now, it looks a lot more interesting: the singers included Mary Costa (Marie), Geraint Evans (Kecal), Lee Venora (Esmeralda), Glade Peterson (Jenik), and Chester Ludgin (Krushina), and it was conducted by Leopold Ludwig. This being the days before Los Angeles had its own company, it was part of a tour by the San Francisco Opera. All of these things strike me now in a way they didn’t then, of course.

The same could be said of the music. I’ve come to love Smetana’s richly melodic score, but at the time it was unfamiliar and seemed short on tunes I could take away. Honestly, more than anything I was struck by the venue, the fabulous Shrine Auditorium. If Norma Desmond were a building, she’d be it.

Still, the love of opera grew—even as I realized that live performances in Southern California were pretty rare. As so often in my life, records offered the solution.

I was around 12 when I decided to plunge in and buy my first complete opera recording. I’d heard enough Mozart around the house to feel it was a good place to start, and my classical music-loving parents agreed. But which one? Marriage of Figaro was the recommendation.

The only problem was its length and cost—three hours or so, which meant three LPs. (Confession: to this day, I still think of operas in terms of how many LPs they fit on.) That meant a price tag well beyond my means—at least if I was to buy one of the recommended full-price versions (Giulini and Erich Kleiber were at the top then, I recall).

But I found an inexpensive version on Seraphim, with a cast that my father said included many very fine singers: Walter Berry and Hermann Prey as Figaro and the Count; also Hilde Güden (the Countess), Anneliese Rothenberger (Susanna), and Edith Mathis (Cherubino). Otmar Suitner conducted the Dresden Staatskapelle.

There was, of course, a reason this was budget priced: it was sung in German. Die Hochzeit des Figaro, rather than Le Nozze di Figaro.

Nonetheless, it was love at first hearing. The music was glorious, the conducting bouncy and pointed, and the singers sure sounded terrific to me.

Fifty years later—they still do. Since then, I’ve heard literally hundreds of Figaro recordings and performances. I recognize now the advantage of the Italian language—and in fact, I particularly crave a certain Mediterranean sensuality in this music.

Nevertheless, Suitner and his company—not Italianate for sure—are to a person exceptionally good. Güden’s glorious mit-Schlag tonal richness is as beautiful a color as you’ll hear from any Countess, and she shapes the line with inimitable Viennese style. Rothenberger is characterful and vivacious (also exceptionally on pitch), Mathis utterly delightful, and both Berry and Prey would certainly be in my top group of exponents for their roles.

It’s not just nostalgia that enchants me every time I hear this recording, still happily in the catalog (now on Berlin Classics).

So if you catch me sometime wandering about Lincoln Center quietly singing “Sagt, holde Frauen” to myself, you’ll know why I’m smiling.