Somewhere in all of this, I decided it was time to try Callas. 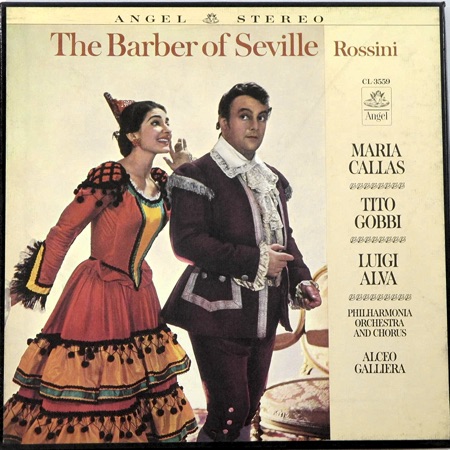 I knew that coming out as gay to my father—which I did at around age 18—would be stressful, but I also found a way to comfort myself in preparation. Surely, I reasoned, this would be no more difficult than my first self-outing experience, which had occurred a couple of years earlier.

That’s when I bravely announced myself as… (deep breath) a Maria Callas fan.

Let me explain. We were, definitively and uncompromisingly, A Renata Tebaldi Household. My dad adored her above all other female opera singers, and two of her early London solo LPs were regularly on the turntable. One was a Verdi disc, which I now recognize as assembled from her complete recordings of La Forza del Destino, Otello, and Il Trovatore; the other an aria recital mixed program that I particularly remember for both Adriana Lecouvreur solos.

It’s very likely that Tebaldi’s voice was my first exposure to all of this music, which I was also hearing under my dad’s tutelage. I came to understand and appreciate what he heard in Tebaldi: the seamless, columnar evenness of her tone; the roundedness and beautiful color; the clarity of her Italian. Several of these performances remain favorites of mine, now decades later—the Otello scene in particular.

And yet. As I got a bit older and more experienced as a listener, I started to form my own opinions, and found aspects of Tebaldi that I didn’t love quite so much. All the characters sounded more or less alike, and although her easy, soft top notes were breathtakingly lovely, the fortes weren’t always so lambent. I started to make comparisons. Leontyne Price’s Trovatore arias had trills; why didn’t Renata’s?

Somewhere in all of this, I decided it was time to try Callas. I didn’t take this step lightly—by then, I knew from my father that Tebaldi and Callas were at opposite ends of a spectrum, and there was a right one (Tebaldi) and a wrong one (you know who).

Nevertheless, I persisted. One day, I brought home from the local library an Angel Records compendium that included one selection I was particularly curious about: “Una voce poco fa,” from Il Barbiere di Siviglia, sung by Callas.

The details are hazy now. I couldn’t tell you more about that particular album, nor do I remember whether the version of the aria included on it came from the complete Barbiere recording, or was instead the one from her Lyric and Coloratura Arias recital. But it was definitely that aria that introduced me to Callas, and I was especially curious about it, because I’d heard it before by Amelita Galli-Curci.

It was clear from the moment I listened to Callas that she was not another Galli-Curci; the sound wasn’t sweet and effortless, nor did she float the tone on her breath with unearthly purity.

On the other hand… wow. Callas’s voice was as distinctive as any musical sound I knew—once heard, never forgotten, just as her fans promised. The range of color and interpretive details were continually fascinating. Each time I listened, I heard something new.

So began a period when my allowance was spent, somewhat surreptitiously, on Callas records. I bought a few Tebaldi discs, too—at the time, her early mono opera sets were starting to be released at a budget price, and I acquired some of them—Tosca, Boheme, Butterfly, I think. The voice in those early recordings was indeed gloriously beautiful, and her sincerity and warmth always very winning. But, I thought smugly to myself, she’s no Callas.

I’m older now, and—I hope—wiser. There’s time in my listening day and space on my record shelves for lots of Maria and Renata. I even admire them both as Tosca. Much as I love the Callas/Di Stefano/Gobbi recording with Victor de Sabata conducting (for many, the recording of this opera), the Tebaldi/Tucker/Warren 1955 performance from the Met, conducted by Dimitri Mitropoulos, packs a visceral thrill that always gets me. Yes—some days, Tebaldi is my favorite Tosca! I say this without apology.

And by the way, my second father-son coming out conversation—the gay one—was much easier than I anticipated. I should have known—after all, if he could accept me as a Maria Callas fan, anything else was easy.