If you want to be sophisticated, drink a cocktail while listening to this particular record. 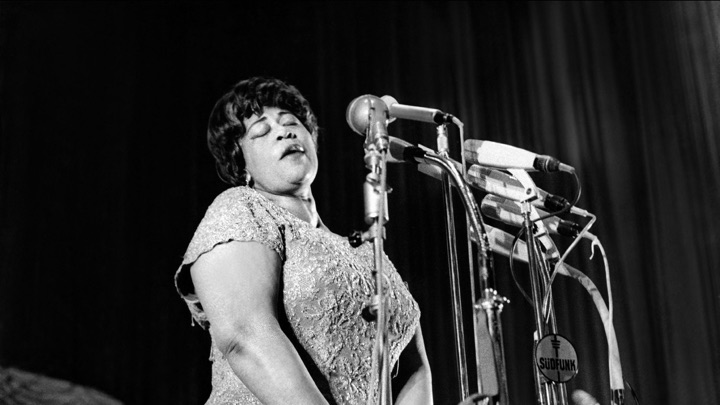 Around age 13, I became obsessed with Ira Levin’s novel Rosemary’s Baby, which had then just been issued in a cheap paperback edition. I read it in a single sitting—gripped, of course, by the weird occult plotline. Maybe even more, as a California kid itching for a sense of East Coast sophistication, I was enamored of all the details of New York: Guy’s career as a Broadway actor and the glamorous way everybody seemed to live.

One particular detail lodged in my memory even then. Rosemary, fixing a fancy dinner to celebrate her fabulous new apartment with Guy, put Ella Sings Cole Porter on the turntable. It entered my checklist: if you want to be sophisticated, drink a cocktail while listening to this particular record.

The only problem? The album was out of print, and nobody I knew—mostly fellow teenagers in Van Nuys—owned a copy. But luckily for me, a good friend did have Ella Sings Rodgers and Hart, a companion album in the series. And we listened to it together.

Subsequently, I acquired Ella Sings Cole Porter, as well as all the other songbooks in that series—they’ve been a treasured cornerstone of my collection ever since. But the R&H1 (as I think of them) remains my favorite. Part of that is because I actually prefer the material—they are, on balance, my favorite musical theater writing team of the pre-1940s, and are equally strong at wit and heart.

So is Ella. I’d recommend beginning with a ballad, which is always my starting point for her. “Spring Is Here,” one of the greatest of all songs by R&H1 is a jaw-dropping display of her bel canto virtues: a legato line that any string player would kill for; beauty of tone that is consistent from top to bottom; ideal rhythmic elasticity; exceptionally elegant ornamentation; and articulation of text so clear you could transcribe it.

There’s also something remarkably self-effacing about Ella, here and in general. Gifted as she was with what might arguably be the greatest pop voice in history, she somehow seems modest about it all. For her, the point of the songbooks, it appears, was to celebrate the composers and lyricists. The singer is the vehicle.

And of course, Ella—famous for her improvised scat singing—can be frisky, too. Two favorite examples from this set: “The Lady Is a Tramp” and “Lover.” Frankly, I find her less persuasive where dry wit is needed: “To Keep My Love Alive” benefits from not being overtly winked at, but it doesn’t quite work for her.

Ella is not by nature sardonic or cynical, which partly inhibits her in Cole Porter. Nonetheless, my single favorite Ella performance of all comes from that songbook—it’s “Get Out of Town,” another ballad.

Like so many recordings, this one is tied to a personal memory. Working the late shift at Tower Classical Records on Sunset Boulevard, we would always try to come up with something fun to play in the minutes before midnight to signal that we were about to close. Once it was “Get Out of Town,” and I vividly recall how, one by one, each of the fifteen or so customers left in the store just stopped browsing to listen more intently. When it was over, there was a collective sigh—a couple of people actually applauded.

I urge you to give yourselves the same pleasure today. Listen to “Get Out of Town”—better yet, the whole of the songbooks.

After all, that Rosemary Woodhouse was no fool. Okay, she unknowingly got knocked up with Satan’s baby. But as every Manhattanite knows, the real takeaway from that novel is that she managed to score a rent-controlled apartment in the Dakota.