Sisters were doing it for themselves

What we see here from Strasberg is frustratingly literal and drably conventional—it looks to me like he's channeling a lot of received wisdom about how Chekhov should be staged and bringing almost nothing of his own to the process. 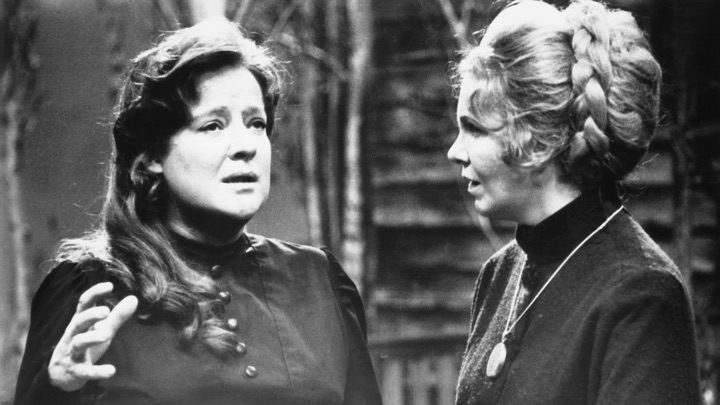 David Fox: Cameron, this is a significant threshold for us, yes? We’ve seen so much theater together, including a number by plays by writers in our particular sweet-spot: Williams, O’Neill and Inge, especially. But though we’ve talked about Chekhov for hours on end—and we’ve seen some of the same productions at different times—I don’t think we’ve ever attended one together.

Cameron Kelsall: I know we were both very much looking forward to a production of Three Sisters at New York Theatre Workshop later this spring, directed by Sam Gold and featuring an illustrious cast of theater and film veterans—among them Greta Gerwig (Masha), Oscar Isaac (Vershinin), Steve Buscemi (Chebutykin) and the invaluable Quincy Tyler Bernstine (Olga). Although the staging hasn’t been canceled yet, its future—like every other announced production at this moment—is uncertain.

DF: But YouTube to the rescue! And what a rescue!

CK: Indeed. Available to stream is a filmed outing based on the 1964 Actors Studio production of the same play, with star power for its moment that rivals the cast NYTW put together. The Prozorov sisters are played by Geraldine Page (Olga), Kim Stanley (Masha) and Sandy Dennis (Irina). Brother Andrei is Gerald Hiken and arriviste sister-in-law Natasha is Shelley Winters. The men in their orbit include Luther Adler (Chebutykin), Robert Loggia (Solyony), Kevin McCarthy (Vershinin), Albert Paulsen (Kulygin) and James Olson (Tuzenbach). Tamara Daykarhanova, a legitimate member of the Moscow Art Theatre, plays old Anfisa. Talk about a murderers’ row of mid-century theatrical talent!

DF: And what a find it is! I’d heard about this famous (or infamous, depending on who was describing it) production for years, but somehow it hadn’t registered that it was actually on film. When I made that discovery, I had to scour the earth for a dim pirated copy. But now, the magic of YouTube gives it to us complete and in pretty good condition. I’ll admit, it took the quarantine for me to finally watch it all the way through—nearly three hours, if you please—while also taking extensive notes. So many things to say, but my summary comment to start would be that absolutely everything I heard about it is true!

CK: It’s a valuable document in many respects. One, as you already mentioned, is its length—it is arguably the most uncut professionally shot version of the play available in English. It also features several performers, like Stanley, with scant film résumés. Perhaps most notably, it’s staged by Actors Studio guru Lee Strasberg, offering a filmed testament to the storied Method as applied to classical drama. Strasberg certainly had his devotees and detractors as an acting teacher, but I think we both agree this shows him as not much of a director.

DF: Absolutely agreed. There’s certainly a relationship between the two arts; in fact, you and I have recently lamented how many current directors seem to focus on mise-en-scène and give little thought to actor work. But what we see here from Strasberg is frustratingly literal and drably conventional—it looks to me like he’s channeling a lot of received wisdom about how Chekhov should be staged and bringing almost nothing of his own to the process. One place I think he fails utterly is the famously problematic question of genre. Chekhov, as we know, called his plays “comedies.” There are, of course, a lot of variations within that style—but here, apart from a few brave, enlivening attempts from supporting actors, it’s pretty much nonstop lugubriousness.

CK: To me, it matters less whether you interpret Three Sisters as a comedy, tragic or amalgam of the two. A steady-handed director should set a consistent tone and stick to it. I actually thought the scenes swung wildly between boulevard comedy and an overwhelming sense of self-seriousness. The sisters themselves are each in different plays: Page seems to be channeling a Neil Simon matron, while Dennis is still in full Any Wednesday mode, flip and all. Stanley—described by her biographer, Jon Krampner, as the first lady of the Studio—looks like she stepped out of The House of Bernarda Alba.

DF: I don’t see as much of the boulevard comedy as you do, frankly, but inconsistency rules the day for sure! Also, as your descriptions suggest, there is virtually no sense of period or place in any of the leading performances. Accents vary, but the speech and much of the styling is very contemporary. I thought Page and McCarthy could give exactly the same performances in A Delicate Balance. An old friend used to say that there are two kinds of people in the world, Olgas and Mashas, by which I suppose he meant two different ways to be miserable. But here, Page and Stanley—while physically quite different—register as too similar. Actually, I think they would have been more effective if the roles were reversed. If I recall correctly, in the casting ins-and-outs that (you should forgive the expression) plagued this production, Page did ultimately play Masha.

CK: Indeed she did, when Stanley—as she was wont to do—walked out of the Broadway production mid-run. Even without the necessary contrast, a viewer can tell that both women are formidable, and they each manage moments that are lovely and quite moving. (More on that shortly.) The two real disappointments are Dennis and Winters, both exceptional talents who fall back on their worst habits.

DF: Given that this is, indeed, The Actors Studio—and that Chekhov is so often seen as its own laboratory for acting—it might be fun to consider these performances by particular strata. If we’re working from the bottom, I’m with you all the way about Dennis and Winters. These are the two irredeemable failures. From the very start, Dennis offers a catalog of her most distracting mannerisms: pauses, sometimes for asthmatic intakes of breath; stopping-and-starting sentences at the most awkward points; and constantly gesticulating and covering her face with her hands. If she were doing this in our current COVID-world, she’d be dead by Act III. She can be an absolutely fascinating actor, and her emotional connectedness is never in doubt, but here what registers is mostly the gimmicks. Winters doesn’t even rise to this level—it’s grotesque musical comedy shtick. She could be Ernestina in Hello, Dolly!

CK: I’d also put Adler in the lower stratum. Of course, he was an associate of another famous theatrical proving ground, the Group Theatre, and he plays the drunk country doctor as if he resided in one of Clifford Odets’ tenements.

DF: Sometimes, I thought I might be watching Awake and Sing! But I actually kind of liked Adler, and in fact, more than several of the principals, I enjoyed the vivacity of some of the supporting cast: Paulsen and Loggia especially. Daykarhanova is a scene-stealer extraordinaire—I can’t imagine how the rest of the company felt about an Anfisa who plays her scenes as though she’s the star, but it’s a lot of fun to watch! On the other hand, Olson does very little as Tuzenbach, which is a wonderful part in the right hands.

CK: Loggia brings a welcome sense of continental flair to Solyony, though sometimes it’s unclear which continent. And although—or perhaps because—Stanley and McCarthy allegedly couldn’t stand each other, they nicely suggest the complicated dimensions of Masha and Vershinin’s unrequited affair.

DF: I’ve liked McCarthy a lot in other things, but I didn’t think much of him here, I’m afraid. Smugly self-confident, he almost seems like a con man. That’s sort of an interesting take on the character, but it made me think less of Masha for not being able to see through him. (Sidebar: what a shame we never got The Actors Studio’s most famous male alum—Marlon Brando, of course—as Vershinin. That’s a performance I’d want to see!)

CK: Before we wrap up, let’s turn back to Stanley for a moment. Hers is surely one of the saddest careers in twentieth-century show business, unraveled by personal demons and mental illness. Those who saw her onstage tend to regard her as without equal, and beginning in 1950, a Broadway season rarely went by without a new play for her. But this Three Sisters—first in New York in ‘64, then in London the following year—marked her final stage appearance ever. (She lived until 2001.) I’m sure we all have lists of people we wished we’d seen live; for me, she’s number one with a bullet.

DF: For me, too (maybe after Laurette Taylor). I can never think of Stanley without remembering Frank Langella’s comments about her in Broadway: The Golden Age. On one hand, he captures the power of her acting so vividly. On the other, the almost orgasmic way he describes her suffering (one of his key moments is “I love… I love… I love Vershinin!”) embodies my distaste at the way the Method seems to traffic in female misery. Here, Stanley is alternately at her best and worst. It’s all over the place, and candidly, she’s made to look absolutely ghastly—like Charles Ludlam playing Rasputin. But nobody listens like her, and nobody registers the truth of every moment like her. And yes—”I love Vershinin!” is indeed one of those moments. Once seen, never forgotten.