Going for the gold 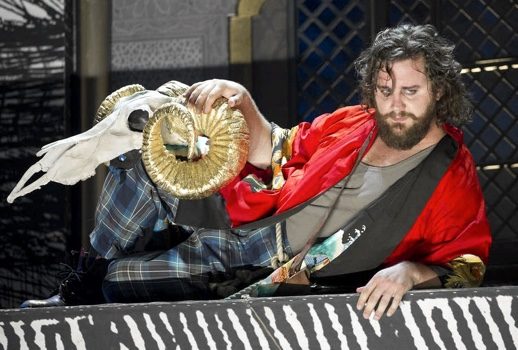 The 150th anniversary of Berlioz’s death will be commemorated by a European tour of Benvenuto Cellini beginning next month, and as a preview “Trove Thursday” presents a broadcast of Cellini (in English) starring Berlioz tenor par excellence Michael Spyres as the flamboyant goldsmith.

Cellini, which has had just a single run at the Met 15 years ago, tends to be referred to as a glorious mess but it’s been done more often recently in the Terry Gilliam production that was used for this ENO performance. I’m a devout Berlioz enthusiast and find the piece wonderfully exciting, inventive and altogether unique especially in comparison to what else was being produced in France at the time.

The August-September Cellini tour with Spyres again in the title role is being conducted by John Eliot Gardiner whose pair of all-Berlioz concerts last fall at Carnegie Hall (one featured Spyres in Lélio) were highlights of the season.

Almost exactly 10 years ago I heard Spyres for the first time as Raoul in the Bard Summerscape Les Huguenots. Although he recently performed Vasco in Frankfurt, he doesn’t seem to have repeated Huguenots despite the mini-Meyerbeer revival in Europe over the past decade.

He has, however, become justly renowned for his excellence in 19th century French music. Just yesterday Spyres performed the demanding title role in a much-anticipated concert performance of d’Indy’s Fervaal in Montpellier for French Radio opposite Gaëlle Arquez who makes her Met debut this season as Cherubino.

He stars as Énée in the recent acclaimed recording of Les Troyens, and recently rejoined his colleagues from that venture—Joyce Di Donato and John Nelson—for performances of La Damnation de Faust which is scheduled to follow Troyens on the Erato label. Perhaps that CD will be released in timefor Spyres’s long-awaited Met debut in that same Berlioz work opposite Elina Garanca in February.

Spyres does of course excel in other repertoire as can be sampled in broadcasts of Rossini’s Ermione and Bernstein’s Candide that were posted here last year.

The English National Opera has in the seasons since this Cellini fallen on difficult times and for a while came under some patriotic criticism for importing non-British singers for leading roles. This broadcast is a prime example as Spyres, Corinne Winters and Nicholas Pallesen are all Americans.

Winters is currently performing Leïla in Les Pêcheurs de Perles at the Santa Fe Opera, while Pallesen (whom I heard as an excellent Ruthven in Marschner’s Der Vampyr) has curtailed performing as a baritone and now is a “transformational coach!”

Cellini can be downloaded by clicking on the icon of a square with an arrow pointing downward on the audio player above and the resulting mp3 file will appear in your download directory.

In addition, more than 250 other podcast tracks are always available from iTunes for free, or via any RSS reader. The archive which lists all “Trove Thursday” offerings in alphabetical order by composer has been updated this month.