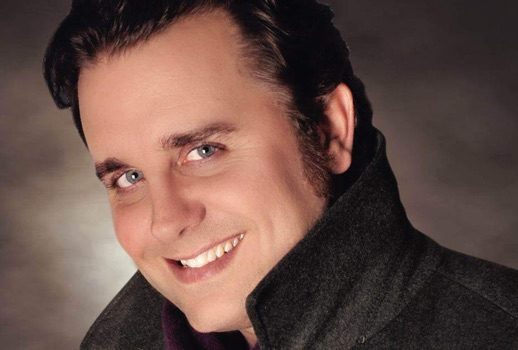 Lately “Trove Thursday” has been binging on prima donnas so the rest of August will be more tenor-centric. This week brings a double bill starring the marvelous Michael Spyres, a specialist in rarities: Rossini’s Ermione and that American obscurity Candide whose composer’s 100th birthday, by the way, is this Saturday.

I wish I could claim that last week’s hiatus was due to a blissful week in Maine but it was just a computer crash. But thanks to the heroic efforts of a saintly fellow Parterrian, we’re back on schedule with last week’s installment of Rossini-150 combined with an unusual Candide co-starring Jane Archibald and the unexpected Old Lady of Karen Armstrong.

The first time I heard Spyres was an ear-opener—his elegant Raoul was a highlight of Les Huguenots at the 2009 Bard Summerscape which was often otherwise a grim trudge. The next summer’s encounter was less fortuitous: an uneven Arnold in Guillaume Tell at the Caramoor Festival. But Spyres later redeemed himself with one of the best versions of his character’s fiendishly demanding scena—his cabaletta is especially thrilling.

Two years after Tell a return to Caramoor allowed him to handily steal the show from both Jessica Pratt and Ewa Podles in Rossini’s nearly unknown Ciro in Babilonia which all three repeated soon after at the Pesaro Rossini Opera Festival again under Will Crutchfield.

The last time I heard Spyres was at Carnegie Hall opposite Angela Meade and Jamie Barton in Bellini’s Beatrice di Tenda nearly six years ago but a Manhattan return is imminent and I understand a Met debut may be in the cards.

This Paris Ermione originated in Lyon and was one of the last performances conducted by the eminent Rossinian Alberto Zedda who died several months later. Meade-skeptics might want to check out what she and Zedda make of the opera’s fiery final fifteen minutes though her partner Dmitri Korchak can be a trial.

In the years he’s been absent from the New York area Spyres has sung mostly in Europe excelling often in the most unusual French repertoire. His most recent triumphs have been in Meyerbeer’s L’Africaine in Frankfurt and at the Opéra-Comique in Paris with Gounod’s La Nonne Sanglante.

I read somewhere that his next resurrection will be as Chapeloue in Adam’s Le Postillon de Lonjumeau whose tenor showpiece became a beloved recording of Nicolai Gedda’s.

Spyres’s noteworthy collaboration with London’s Opera Rara has resulted in several CDs including Donizetti’s Les Martyrs and Le Duc d’Albe with Meade, along with Espoir, a recital of arias associated with Gilbert Duprez.

In Ermione Spyres sings the role of Achilles’s son Pirro, a figure whose story turns up in Berlioz’s Les Troyens, which the tenor also recorded recently with John Nelson opposite Marie-Nicole Lemieux and Joyce DiDonato.

Andromaque also appears (but doesn’t sing) in Troyens, but she plays a much larger part in Racine’s play which was the basis for Tottola’s Ermione libretto for Rossini. Tottola de-emphasized the role of Hector’s widow so Andromaca becomes far less important than Ermione.

The last time I was in Paris the person I was staying with invited me along to a dinner party given by a friend of his, a beautiful actress who had recently played Hermione in Racine’s magnificent play at the Comédie-Française. Unfortunately, that production wasn’t being performed while I was in France but hearing her speak about it and having seen the fine New York City Opera production of Ermione with Alexandrina Pendatchanska, I grabbed a copy of Andromaque when I returned to New York.

As it turned out the English translation I read was by poet Richard Wilbur, one of the primary creators of Candide.

In addition to his fine Racine and Molière adaptations, Wilbur devised gloriously witty lyrics which are one of the highlights of the operetta’s effervescent and moving score. However, the less said about the many libretti that have struggled over the past sixty-plus years to make something theatrically viable of Voltaire’s picaresque romp, the better.

Next month Spyres returns to the eastern US to appear as Edgardo in Laurent Pelly’s new Lucia di Lammermoor opposite Brenda Rae for Opera Philadelphia.

I’d be willing to bet he’ll sing the high E-flat in the first-act duet. As the production resurfaces later in the season with Olga Peretyatko in Vienna, I’d catch it in Philly!

Then in October at Carnegie Hall the tenor will continue his Berlioz collaboration with Sir John Eliot Gardiner and the Orchestre Révolutionnaire et Romantique (they have performed La Damnation de Faust together) performing Lélio.

Ermione and Candide can be downloaded by clicking on the icon of a square with an arrow pointing downward on the audio player and the resulting mp3 files will appear in your download directory.

All previous “Trove Thursday” podcasts remain available from iTunes for free, or via any RSS reader.