Witch side are you on?

A main theme in Becky Nurse of Salem is how history is distorted by those who get to tell it. 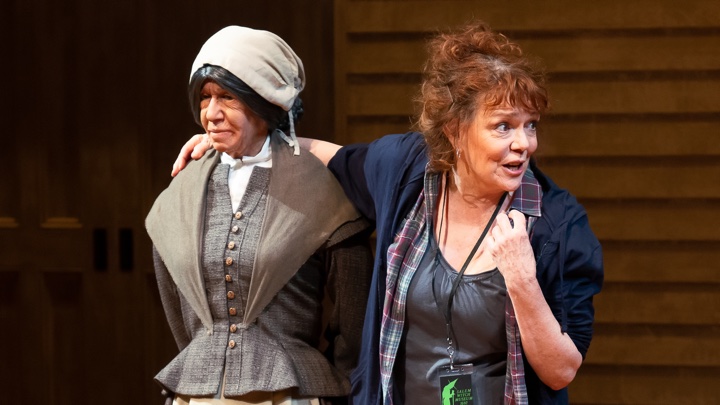 If you read The Crucible in high school, you might remember Rebecca Nurse. A minor character in the play, she goes to her death along with John Proctor, falsely swept up in the panic of the Salem witch trials.

Arthur Miller based Rebecca on a real person: a pious, 71-year-old woman whose deafness may have sealed her death warrant. (According to historical accounts, she couldn’t hear the court’s accusations during her trial.) The contemporary playwright Sarah Ruhl checks in with her descendants in Becky Nurse of Salem, now onstage at Lincoln Center Theater’s Mitzi E. Newhouse stage.

Whereas Miller centered filtered his story of Salem through the perspective of a man, Ruhl returns the action to the female gaze. In an essay published in the Lincoln Center Review, she also quotes Miller, who said that his impetus to write The Crucible was not just in response to the Red Scare in Hollywood, but as a reaction to his failing first marriage and his desire for Marilyn Monroe, his eventual second wife.

So in Miller’s telling, we get the tale of an upright man caught between his sense of moral rectitude and his desire for his lover. Ruhl also makes the point that the historical John Proctor was 60 years old in 1692, when the events occurred, and his object of lust, Abigail Williams, was 11. (The play ages her up to 17.)

That fact infuriates Becky (Deirdre O’Connell), namesake of her ancestor, who is fired from her job as a tour guide at the Salem History Museum for trying to set the record straight. A lifelong native of the spooky Massachusetts town, she resents those who think they know better than the locals about the real story of the past, like her uptight academic boss Shelby (played by the appropriately prim Tina Benko).

But the dark comedy focuses not just on correcting the record. Ruhl also takes on the opioid epidemic and the toll it’s taken on rural America. Becky’s daughter Amy died of addiction, leaving her to raise her 15-year-old granddaughter Gail (Alicia Crowder). Becky herself struggles with a dependence on the pills she takes to ease her own chronic pain. 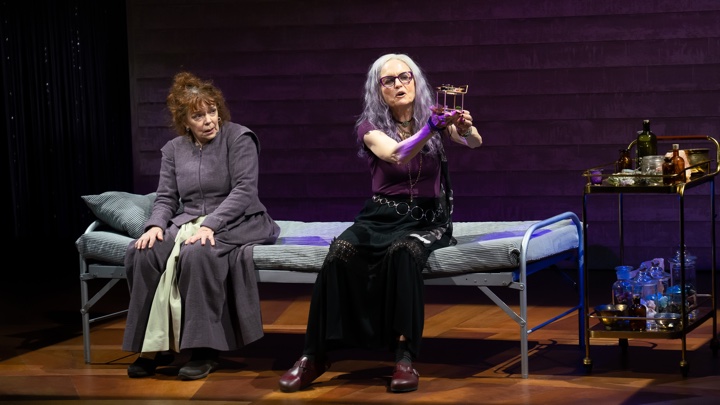 The play, set in 2016 and 2017, also links the collective hysteria of 17th-century Salem to the contemporary choke of Trump worship. The familiar phrases of “Lock Her Up” and “Kill the Witch” are employed with a wink and a nod.

Ruhl makes compelling points in each of these areas, and although director Rebecca Taichman occasionally leans too far into broad humor, the results are consistently entertaining and engaging. Yet the play itself rarely lingers long enough on any one subject to see it through to maximal effect. The then-and-now comparison of collective frenzy feels particularly underdrawn, and a late invocation of the evil Sackler Family seems like especially cheap writing.

The most genuine moments occur between Becky and her longtime crush, a kindhearted bartender named Bob (the superb Bernard White), which offers a soft-grained portrait of late-in-life romance. It is the ideal reversal of the creepy and predatory interactions between John Proctor and Abigail Williams: a joining of equals.

And throughout, O’Connell is extraordinary. A Tony winner this year for her riveting performance in Dana H., she proves as adept in comedy as she was chilling in drama. She is also one of the few actors I’ve ever seen who plays convincingly working class without a hint of artifice.

The Lincoln Center production is handsome and memorable, especially in the spare but striking sets (by Riccardo Hernández) and the eerie score by Suzzy Roche. The work itself ultimately hangs together loosely, although I have to admire Ruhl’s motives. It’s never too late to get the history right.

All quirk and no play

Love, loss and what she wore