As the focal point of the The Far Country, Eric Yang anchors the production with a cool steadiness that only occasionally betrays a sense of urgency beneath his patient countenance. 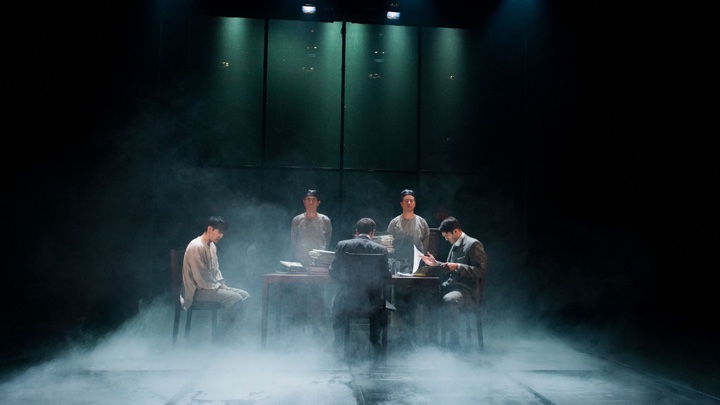 Anti-Chinese sentiment roiled in the years after immigrants built the railroads that opened the West to the rest of the American continent. The Far Country, a moving, meditative play by Lloyd Suh, receiving its world premiere from Atlantic Theatre Company, considers this period in history and places it within the greater context of service that foreign-born citizens have contributed to this country.

When the Great San Francisco Earthquake hit in 1906, it destroyed nearly all official documents held in local government offices. This windfall allowed some Chinese nationals, nearly 15 years after the enactment of the Chinese Exclusion Act, to file falsified claims of birthright citizenship, provided they could prove their assertion beyond a reasonable doubt.

Gee (Jinn S. Kim), an aspirational businessman who runs a laundry service, takes advantage of the situation, while also inventing the cover of a wife and children conceived on a trip to visit relatives in the ancestral homeland.

In doing so, Gee sets in motion a chain migration: American passport in hand, he can return to China and sell his name to a willing young man who will learn to be his “son.” The transaction costs $1600 US dollars, to be paid back through garnished wages and indentured servitude. But perhaps more psychically expensive, it requires the shedding of one’s former identity, in order to convince officials that you belong in a country that doesn’t want you, even as it needs your labor.

He finds a willing participant in Moon Gyet (Eric Yang), who wishes to leave the poverty of his home village for the “Gold Mountain” dream of America. Throughout the rest of the play, Suh considers how dreams do and don’t come true.

The structure fuses forward momentum in the narrative with a poetic, speculative style of dialogue. Action happens more or less chronologically and briskly, from Moon Gyet’s crossing to his return a decade later, wearing the finely tailored suit of an upwardly mobile American businessman. (The costumes, by Junghyun Georgia Lee, smartly convey differences in culture and class.)

We also come to understand the repetitive and psychologically torturous confinement Moon Gyet endures on Angel Island, where a group of ruthless government officials (played by Ben Chase and Christopher Liam Moore) relentlessly try to poke holes in his seemingly airtight origin story.

Moon Gyet’s interrogation is mirrored by a digressive section of direct-address narration recounted by Gee and a character identified only as One (Whit K. Lee). This was the only portion of the production, and the play itself, that felt hollow: both too presentational and too discursive, its purpose seemed only to advance the situation at the end of the first act. Considering how strongly Suh writes throughout the rest of the work—and the elegant, character-focused direction of Eric Ting—it added little to the story or the overall mood.

Suh excels in building connections between his characters, and the play thrives in its strong scenes that highlight intimate moments between two people. He shows the tender affection that Moon Gyet’s mother Low (Amy Kim Waschke) feels toward her only surviving child, and the powerful but pragmatic choice she makes to give him up to a different future. Low is a riveting presence, especially in the second-act scene where Moon Gyet returns to China, and she reckons with how the West has changed him, for better and worse.

The audience also sees a meeting of the minds in Moon Gyet’s introduction to Yuen (Shannon Tyo), who will become his future wife. Tyo infuses her character with strength, resilience, and good humor, signaling her ability to face hard odds and prevail. There is also tenderness between her transactional dealings with Moon Gyet, who holds the key to her future.

As the focal point of the play, Yang anchors the production with a cool steadiness that only occasionally betrays a sense of urgency beneath his patient countenance. It’s not a showy performance, but it absolutely grounds the piece.

The set design, by Clint Ramos, appears utilitarian, with minimal props, before revealing depths of beauty and treasure that match the gradual shifts of the story, as pain and degradation give way to glimmers of hope and caring. Jiyoun Chang’s lighting design is particularly warm and complementary in the touching final scene between Yuen and Gee, whom she now affectionately calls “Uncle.”

The sad reality of seeing The Far Country in 2022 is the knowledge that we haven’t moved so far from the story it tells. Violence against Asian citizens remains a sickeningly common part of modern life. Suh tells a story of a group of people who overcame the roadblocks against them and asserted a right to live the best lives they could. In the end, he shows a country of promise.