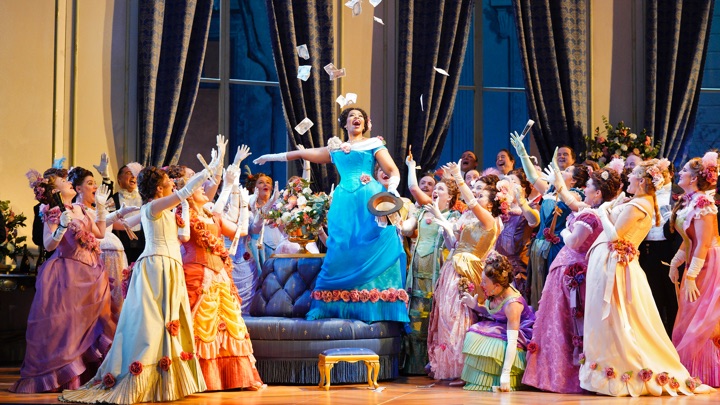 That distinction was important to note (especially for you, dear prickly readers!) as during that 35 years “reign” of John Copley’s trusted old staging, SF Opera indeed presented a season with Marta Domingo’s production (borrowed from LA Opera) in 2009 as a vehicle for Anna Netrebko and Charles Castronovo.

Billed as “San Francisco Opera legacy production” in the press release—following the 2018 Tosca —created by the same production team in similar fashion—it was designed specifically for the War Memorial stage and constructed “to be sturdy enough for numerous revivals over multiple decades”.

While having some concerns over the ever-changing audience’s tastes, I did however applaud the financially smart decision to embark on creating “legacy productions” for well-known operas. Opera staging is an expensive endeavor; thus, having steady, dependable, and reusable productions make a lot of sense. I hope that once the system is well established, SF Opera even considers renting out such productions to generate more revenue.

The challenge of having such legacy productions is to find a happy medium between productions that can stand the test of time and that are durable and easy enough to maintain over a (long) period of time (decades?). While I did have some reservations on the 2018 Tosca (particularly with regards to the sight lines of Robert Innes Hopkins’ sets in 2018 and much less of a problem in the 2021 revival, I was happy to report that this time the production team struck gold with this beautiful and unassuming staging!

Director Shawna Lucey—who also oversaw the final Copley revival in 2017—brought sensitivity and nuance in her decidedly conventional take on the story of Paris’ most famous courtesan, with enough quirkiness to make it interesting (more on that later). In her vision, the audience was transported back to the 19th century with an explosion of colors for both Hopkins’ costumes and set pieces.

I personally loved the use of striking colors on stage—particularly on Violetta’s defining costumes—and how Michael Clark’s lighting seemed to always mirror whatever color Violetta wore, from the bold cerulean blue in Act 1, fearless crimson red in the Flora’s party Act 2, to the jaw-dropping monochromatic shade of the final act—where the tragic ending seemed to have sucked all the colors from the stage! You can get a glimpse of the metamorphosis of the colors in the trailer.

La traviata, and Alexander Dumas fils’ play La Dame aux camélias where it was based on, were both influenced by real-life famed courtesan Marie Duplessis, and Hopkins’ tall, airy static sets for Act 1 and 3 were modeled after Duplessis’ Parisian apartment. In contrast, Violetta’s country house of Act 2 was depicted as a peaceful greenhouse, where Violetta’s short-lived happiness was shattered with the arrival of Giorgio Germont, Alfredo’s father.

Much had been said about the feminist nature of Lucey’s interpretation of La Traviata, particularly in an illuminating SF Examiner article. The most prominent display of women’s empowerment was at the end of Act 2, right after Alfredo denounced Violetta. One by one, every single woman in the Chorus/supernumeraries parted way with their spouses and sided with Violetta, making it a really thrilling effect, especially in the post Roe v Wade world. Who said opera isn’t political??

Nevertheless, the most exciting part of Lucey’s direction came during the gender bending Flora’s party in Act 2, where Marchese d’Obigny (naughtily acted by Timothy Murray) dressed in pink tutu below his tuxedo, and dancers (choreographed by John Heginbotham) wore half-man/half-woman costumes parading on the stage. It provided a brief respite in between the high drama of Act 2 Scene 1 and the aforementioned denouncement scene.

If I might nitpick, I wished the transition from Scene 1 and 2 during Act 2 that night was handled more quickly, as the audience already started to leave their seats thinking it was intermission (despite the supertitle warning of “a brief pause”), resulting in a little chaos in the beginning of Scene 2, especially in Orchestra level!

While the production aspect was excellent, what truly elevated the performance last Friday was the music making, particularly with the involvement of the three leads, all of which were making house debuts that night.

Ever since her role debut in Simon Stone’s modern production at the Paris Opera in 2019, soprano Pretty Yende had made Violetta her calling card as she sang it from Barcelona and Vienna to London and Naples. It was often thought that Violetta required three different kinds of soprano to sing it properly; on Friday Yende unified her interpretation of the role by utilizing her pure lyrical voice in a way that kept gaining strength as the night progressed. 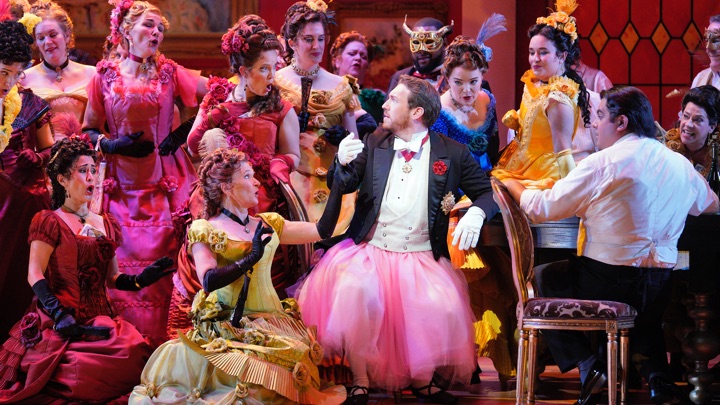 A bel canto virtuoso, she had no problems navigating the coloratura passages of “Sempre libera”—even capping the cabaletta with high E-flat—but more interestingly was her take on the aria, which was saturated with a sense of longing for a better life, making it less bright and exuberant than usual but more introspective in a way.

Even more interesting was her acting of the role; her Violetta almost felt like an outlier, she knew her days were numbered, and she desperately looked for an alternative of being courtesan.

In a way, she perfectly realized what Lucey intended in her Director’s Note: “Our new design delves into Violetta’s life on display, with her only respite being the country house of Act II. Here we glimpse her healing through love for mere moments before the demands of this society crash through her Garden of Eden in the form of Alfredo’s father.”

Violetta’s shattered dreams of happiness came through in her voice throughout Act 2 as she went more and more desperate; “Amami, Alfredo, amami quant’io t’amo” was particularly devastating as she knew that there would be no happy ending from this point onwards. By the time “Addio, del passato” arrived in Act 3, the audience held their breath alongside her in a truly chilling effect. No wonder she received the loudest cheer during the bows, and she looked extremely humbled and touched by the audience’s reactions.

In an extreme contrast, tenor Jonathan Tetelman turned Alfredo into a hot-blooded young man, a man that was governed solely by his heart and not his head. With his tall, dark, handsome look and a voice that rang clear and bright throughout, he had no problems riding over the orchestra during the big climaxes. While there were times that I wished for a little more softness on his part, nevertheless he presented a wholesome take on the man-child character Alfredo.

Italian baritone Simone Piazzola truly impressed me as Giorgio Germont, Alfredo’s father. It was so refreshing to hear the role sang this well, full of nuance and warmth. Reading a much younger Giorgio than usual, his take on the role was pretty different from the usual lovely-dovey paternal instinct. 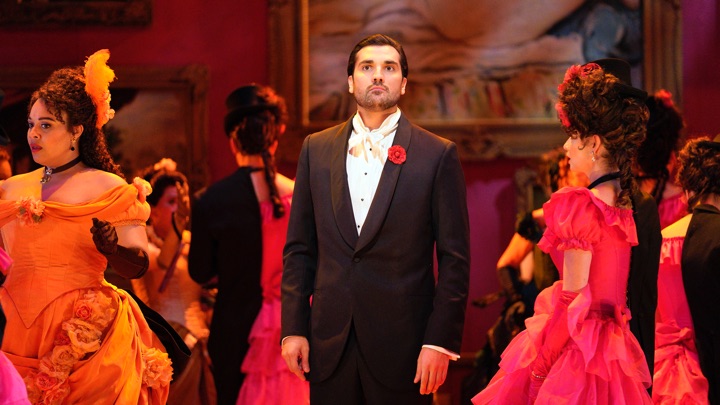 There were certain dark undertones in his voice, almost sinister, as if his Giorgio manipulatively knew exactly what he was doing when he approached Violetta and (later on) Alfredo in Act 2. His “Di Provenza il mar” particularly brought the house down! In turn, this made his regret in Act 3 even more heartfelt and shattering!

As usual, the rest of the comprimario roles were handled handsomely. Veteran bass-baritone Philip Skinner, who was awarded SF Opera Medal on October 30 (during the last performance of Dialogues of the Carmelites) for his countless service to SF Opera, made a terrifying Baron Douphol, while Taylor Raven, Adam Lau and Elisa Sunshine shone bright as Flora, Doctor Grenvil and Annina (Violetta’s maid) respectively.

SF Music Director Eun Sun Kim conducted the orchestra in an exciting manner, highlighting the many different dance aspects of the score. The orchestra, too, seemed to be responding very well under her direction; truly a great sign as this was the inaugural performance of the planned multi-year Verdi project. I definitely look forward to hearing Kim conducting more Verdi (and Wagner!) in the future!

All in all, it was a great night at the Opera last Friday night (which seemed to be the running theme for the Centennial Season so far), and I look forward to experiencing this production again in the near future. Hopefully Lucey (and other future revival directors) will have more tricks up their sleeves to make the show up to date and interesting for future audience!

On a lighter note, SF Opera literally welcomes audience to the immersive The Traviata Encounter on November 19, where they can experience Act 1 first hand!