While it must be admitted that Elza van den Heever doesn’t have an ideally warm and agile Handel voice, she evidenced fierce control over her instrument and skillfully built a powerful portrait of the courageous Rodelida fighting for her survival. 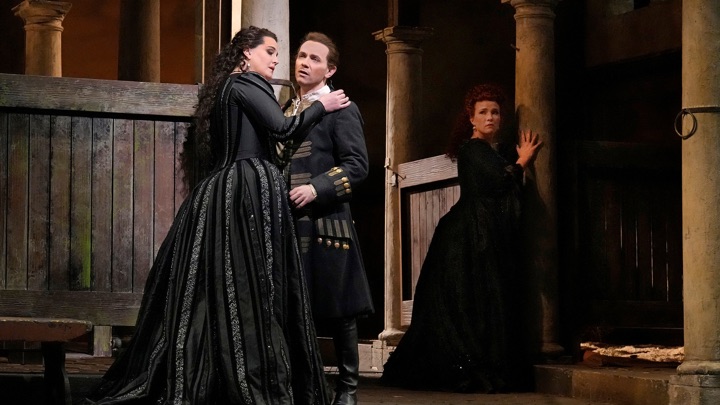 Prejudging performances can be dangerous as expectations based on past experiences aren’t always fulfilled. I was reminded of lessons I should have already learned during Friday’s Rodelinda at the Metropolitan Opera. I hadn’t been looking forward to the return of Handel’s masterpiece to Lincoln Center, but despite some real weaknesses it turned out to be a surprisingly effective serving of opera seria, thanks especially to Elza van den Heever’s fiercely committed portrayal of the title role.

I attended the premiere of Stephen Wadsworth’s production in 2004 when it arrived at the Met as a vehicle for Renée Fleming and David Daniels, and I also returned a few years later when Daniels was replaced by Andreas Scholl.

Rodelinda’s HD transmission in 2011 featured Iestyn Davies in the secondary part of Unulfo but for this revival he ascended to the leading role of Bertarido, the deposed King of Lombardy. His struggle to regain his wife, son and throne from the usurper Grimoaldo forms the crucial action of the third remarkable opera Handel turned out in just over a year, following Giulio Cesare and Tamerlano.

My earlier encounters with Wadsworth’s work on Rodelinda had left me with a positive response. But experiencing it again in 2022, while I still appreciated the strong direction of the seven principals, overall it struck me as intolerably busy. Presumably to fill Thomas Lynch’s enormous sliding sets and evoke the bustling Milanese court, a dozen or so busy supers rarely discreetly disappeared. Their constant milling about only distracted from the central drama. 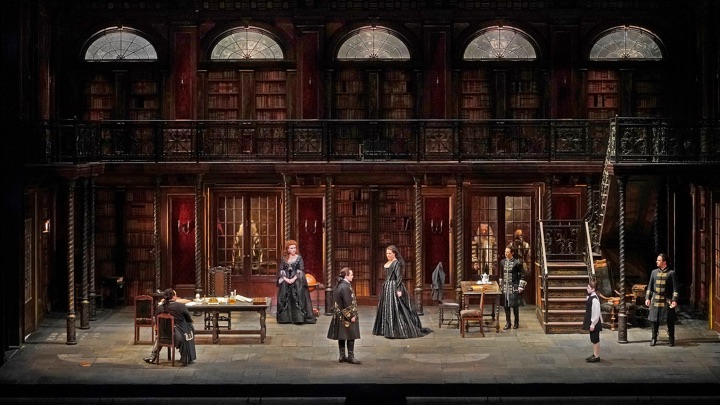 For example, two soldiers on guard duty regularly marched across the stage; by the third act, their recurrent appearances were greeted by derisive laughter. The most egregious example of pointless activity occurred during the beginning of Rodelinda’s exquisite “Ritorna, o caro” when the omnipresent gardener popped in to drop off a box of flowers—for absolutely no reason! And what exactly was the need for a live horse?

That the audience could concentrate on the six singers plus Brandon Chosed in the mute role of Rodelinda’s son Flavio was a testament to the cast’s strong dramatic portrayals. The secco recitatives that connected the da capo arias were delivered with a passion that successfully drew one us the central triangle, especially the fierce conflict between the proud van den Heever and Paul Appleby’s dyspeptic pretender.

Though the tenor delivered his biting coloratura with aplomb, he was most effective in Grimoaldo’s more reflective music such as the lilting “Prigioniera ho l’alma in pena” and his regretful final scena. While Adam Plachetka strutted about menacingly as Garibaldo, his abrasively gritty timbre gave little pleasure. On the other hand, Sasha Cooke, a late addition to the cast, poured out her plush mezzo with stylish flair as Eduige, Bertarido’s sister and Grimoaldo’s neglected fiancée.

With Davies as Bertarido and Anthony Roth Costanzo as Unulfo, it couldn’t have been a happy night for countertenor haters. But it wasn’t an especially great night for countertenor lovers either. One expects a “guy who sings high” to necessarily excel in baroque music, but my Handel/Gluck experiences with Costanzo both live and on broadcasts and recordings have suggested that he’s best when he sticks to contemporary music. Unulfo’s arias lay uncomfortably low for him, and his coloratura was labored rather than suave. 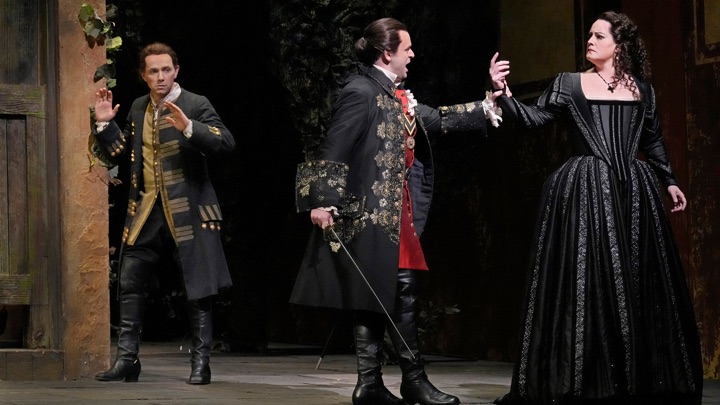 Davies started wonderfully with “Dove sei,” the hero’s ravishing lament and the opera’s best-known selection. It’s too bad that he wasn’t allowed one or the other of Bertarido’s wonderful alternative arias.

As the evening progressed, his tone got increasingly hooty and, though he managed the vocal fireworks of his final aria “Vivi tiranno” respectably enough, it lacked the show-stopping virtuosity Handel intended. Having previously heard Davies as both Orlando and Rinaldo, I wasn’t surprised that he ran out of steam by the end. But before then he had blended exquisitely with van den Heever in “Io t’abbracio” which closes the second act, the opera’s only duet.

Having most recently heard the cool South African soprano in her very different Met outings as Chrysothemis in Elektra and Marie in Wozzeck, I hadn’t much expected to enjoy her Rodelinda. While it must be admitted that she doesn’t have an ideally warm and agile Handel voice, she evidenced fierce control over her instrument and skillfully built a powerful portrait of the courageous queen fighting for her survival.

The top of the voice can be quite edgy, and, while it might not come across very effectively on the radio, in the opera house it acquired a warmth and vigor that won me over. Her arias of pathos elicited tears while the defiant ones sent shivers.

Before the performance, I hadn’t recalled that van den Heever was indeed a Handel veteran. She has tackled two of the composer’s most compelling sorceresses: Rinaldo’s Armida at Lyric Opera of Chicago and the title role of Alcina in Bordeaux and Santa Fe. While I expect next season’s Met Senta in Der Fliegende Holländer will suit her riveting intensity, I was moved and impressed by her return to the 18th century.

Her previous Handel roles elsewhere had been conducted by Harry Bicket who has become the Met’s go-to baroque conductor. He’d led both the 2004 Rodelinda premiere and its 2011 HD, and this year’s edition might have been his strongest yet with the orchestra responding strikingly well to a sort of music they rarely perform. My only quibble would be that Daniel Swenberg and John Lenti’s plucked instruments were often too aggressively amplified. To my surprise, all in all I enjoyed the latest Met iteration of Rodelinda more than I thought I would.

The night before Handel returned to the Met, Vivaldi took over Carnegie Hall when the French early-music ensemble Jupiter ended their short US debut tour at the complex’s smallest venue, Weill Recital Hall. Founded by lutanist Thomas Dunford, the group has released two recordings, both featuring young mezzo Lea Desandre. Like Thursday’s concert, the first on Alpha Classics includes all Vivaldi, while the second, Erato’s Amazone, presents a program of 17th and 18th vocal works about female warriors.

Dunford offered a bewitching lute concerto and Bruno Philippe a bravura one for cello, but the evening was otherwise devoted to arias sung by Desandre, seven from Vivaldi’s operas and oratorios, plus a single haunting movement from the Nisi Dominus.

Of the composer’s arias that might be considered famous, Weill’s audience heard several. Showing off breath-defying fioratura, Desandre sailed insouciantly through the brilliant “Armatatae face” from Juditha Triumphans.

The pandemic unfortunately prevented New York from hearing the pair together in a pasticcio with Les Arts Florissants scheduled for Mostly Mozart in June 2020.

Desandre’s vibrant mezzo which rises easily from dusky lows to sweet highs didn’t oversell her music. While Vivaldi’s infectious bops can invite performers to move about with abandon, she remained quite still, so much so that one sometimes wanted her to “sell” her selections a bit more theatrically.

While she has sung Cherubino in Paris and Despina at the Salzburg Festival, it seems likely that Desandre will continue to concentrate on earlier music, such as Blow’s Venus and Adonis which she and Dunford performed with Opera Lafayette locally several years ago.

While Rodelinda continues at the Met until March 27, Handel-lovers will surely be venturing to the Brooklyn Academy of Music for a much-welcome revival of Mark Morris’s glorious setting of L’Allegro Il Penseroso ed il Moderato beginning March 24.