American soprano Gianna Rolandi died Sunday morning, according to a number of her friends and colleagues. She was 68. 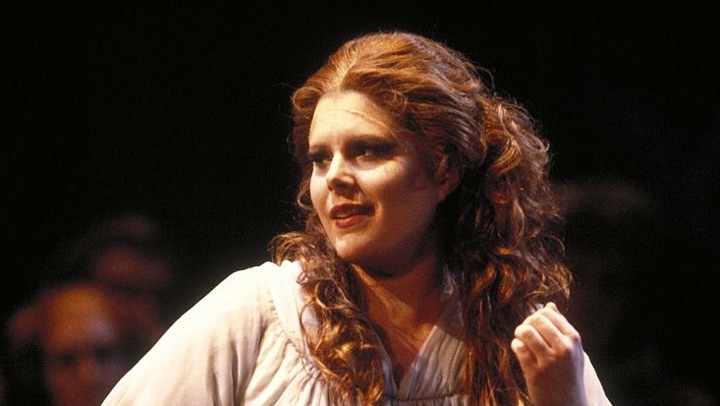 Rolandi was born on August 16, 1952 in New York City, and grew up in Spartanburg, South Carolina. Her mother, Jane Frazier, was an American soprano, who met her father, Italian obstetrician-gynecologist Enrico Rolandi, while singing in Italy.

Rolandi started out as a child violinist but recalled that “when there was nobody home, I’d turn on opera records and sing along with Tosca and Madama Butterfly.” By the late 1960s, she was studying violin at the Brevard Music Center, and she attended the North Carolina School of the Arts as a violin major in her senior year of high school.

She took her first voice lessons at the Brevard Music Center, and continued a long association with the Center, where many of her coloratura roles were learned and first performed. During this period, Rolandi also worked as a baby sitter for the family of the young David Daniels!

The soprano then trained for four years at the Curtis Institute of Music in Philadelphia. She was a finalist in the Metropolitan Opera auditions in 1974, and one of the youngest winners of Minna Kaufmann Ruud Competition in their history. She graduated from the Curtis Institute in 1975.

Rolandi made her debut with the New York City Opera on September 11, 1975 as Olympia in Les Contes d’Hoffmann in the company of Nancy Shade as Giulietta, Patricia Craig as Antonia and Samuel Ramey as the four villains. She was also heard that fall as Zerbinetta in Ariadne auf Naxos. Reviewing her portrayal in a 1977 performance, New Yorker critic Andrew Porter wrote: “Gianna Rolandi’s Zerbinetta lacked softness and sweetness of timbre to start with, but as the music became more difficult her singing became gentler, more prettily and captivatingly playful. The big aria was exquisitely done.”

In Gianna Rolandi, the City Opera had a Zerbinetta capable of creating pandemonium in any opera house anywhere. Her deft and virtually unflawed handling of her big, florid aria, one of opera’s most feared obstacle courses for coloratura soprano, brought the performance to a halt for as extended an ovation as this reviewer has heard at either of our opera houses this season. Besides shooting the eyes out of that showpiece, however, Miss Rolandi danced and otherwise cavorted with amazing grace and buoyant humor. Zerbinetta often steals the show in Ariadne but seldom with such justification.

Rolandi went on to become one of the leading sopranos of her generation at NYCO. Her roles there included Susanna, Rosina, Adele, Gilda in Rigoletto, Mabel (The Pirates of Penzance), Queen of the Night, Fortuna and Drusilla (L’incoronazione di Poppea), Countess Adele (Count Ory), the Queen of Shemakha in Le Coq d’or, the title roles of Naughty Marietta and La Fille du Régiment and Cleopatra in Giulio Cesare.

Rolandi was held in high regard by Beverly Sills, the company’s superstar turned general director during Rolandi’s heyday there. Indeed, Sills became a mentor figure to her younger colleague and bequeathed many of her operatic properties to Rolandi.

“Beverly’s door is always open,” Rolandi once noted. “It’s wonderful to have someone who’s sung all these roles and to ask her how she solved certain problems.”

In 1981,  Rolandi added I puritani to her NYCO repertoire. Porter wrote: “Gianna Rolandi’s first Elvira was a success—carefully prepared, accurately and touchingly sung, stylish and delicate in its phrasing. She was at her best in fleet decorated music.”

For her part, Rolandi enjoyed the nurturing aspects of her formative relationship with NYCO and remained loyal to the company throughout her career. “I feel like I’ve grown up here,” she said. ”The City Opera is a blessing for me, as it is for lots of young singers. You get exposure and you don’t have to leave home.”

Rolandi performed the role of the Daughter in the 1976 American premiere of Tal’s Ashmedai at NYCO and participated in the world premiere of Argento’s Miss Havisham’s Fire in 1979. According to Porter, “the title role was originally intended for Beverly Sills. In the event, it has been divided between Gianna Rolandi, who plays Miss Havisham on her bridal day, and Rita Shane, who plays the mad Miss Havisham. Miss Rolandi has a joyful, brilliant D-major aria, “The sun has risen,” reminiscent of Jenifer’s coloratura music in Tippett’s The Midsummer Marriage. She sings it brightly, buoyantly. She acts the impetuous young bride well, and makes poignant the moment when she is stricken.”

Rolandi participated in several “Live from Lincoln Center” telecasts of New York City Opera performances, including the Beverly Sills Farewell Gala in 1980, in which she sang Adele in Act 2 of Fledermaus. That same year, she also took the role of Clorinda in a telecast of La Cenerentola, performing the bravura aria “Sventurata! Mi credea,” an alternative aria written by Luca Agolini.

In 1982, Rolandi took the title role in a telecast of Lucia di Lammermoor with Barry McCauley in the role of Edgardo. In a 1983 telecast of The Cunning Little Vixen, her saucy yet poignant characterization formed an indelible association with Janacek’s animal heroine.

Ms. Rolandi sang . . . in bright and smoothly shaped phrases, delivering her last act aria, ‘Deh! vieni, non tardar,’ with unusual grace. She brought to her character a winning mix of coy self-confidence and street-smart savvy. And most importantly, Ms. Rolandi blended easily and convincingly with the ensemble of singers, whose ability to complement and play off one another’s efforts was largely responsible for the production’s success.

Rolandi made her Metropolitan Opera debut on December 26, 1979 as Sophie in Der Rosenkavalier. Her colleagues on that occasion included Agnes Baltsa in the title role and Johanna Meier as the Marschallin with Erich Leinsdorf conducting. In total, she sang 17 performances with the company and her other roles there included Olympia, the title role in Stravinsky’s Le Rossignol and Zerbinetta.  These last two roles were preserved as part of the Texaco-Metropolitan Opera Saturday afternoon radio broadcasts.

Rolandi made her Lyric Opera of Chicago debut in the 1986-1987 season in Handel’s Orlando opposite  Marilyn Horne. Her return to LOC in 1993-94 as Despina would serve as her farewell to the operatic stage.

Rolandi made her San Francisco Opera debut in 1986 as Lucia. She returned later that same year as Susanna with Ramey as Figaro and Kiri te Kanawa as the Countess. Her final appearances there were in the 1988-89 season as Despina. Her 1981 European debut was at Glyndebourne as Zerbinetta. She returned there in subsequent seasons for performances as Susanna and Zdenka in Arabella. The last was filmed for video release and featured her NYCO colleague Ashley Putnam in the title role.

Of Rolandi’s recording of Le nozze di Figaro for EMI with Bernard Haitink conducting, C. J. Luten noted: “Rolandi’s vibrant soprano is not always in sharp focus under pressure, but her characterization always is. She punctuates her recitatives, refuses to glide blandly though them. Her singing is most pleasing in Susanna’s second-act aria, many an ensemble, and in the letter duet with Felicity Lott, the Countess.”

Other European engagements included Ginevra and Cleopatra in for Geneva (both opposite Tatiana Troyanos), Amenaide in Tancredi for Turin (with Lucia Valentini-Terrani) and Elcia in Mosè in Egitto at the 1985 Rossini Opera Festival in Pesaro.

Rolandi married conductor Sir Andrew Davis in 1989. The two had worked frequently together at the Glyndebourne Festival and the Met. Rolandi and Davis eventually took up permanent residence in Chicago, where he serves as Music Director and Principal Conductor for Lyric Opera of Chicago. When Davis was knighted by the Queen of England in 1999, Rolandi was referred to as “Lady Davis.” She is survived by Davis and their son Edward.