Learning how to laugh

When I think of Stephen Sondheim, so many of my memories are not simply about shows of his I loved and learned from—they are experiences that literally shaped my life. 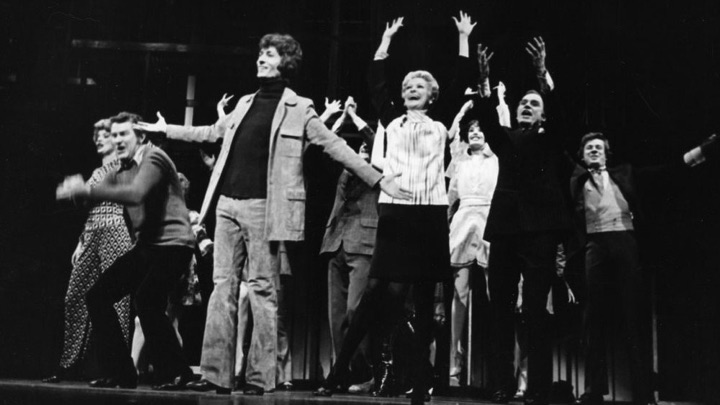 On Saturday afternoon, when I first heard that Stephen Sondheim had died, my mind curiously went back to an anecdote from many years ago that had nothing to do with him.

The story as heard it involved a remark made by Daniel Patrick Moynihan in the days following John F. Kennedy’s assassination. When a grieving friend remarked to Moynihan that they “would never laugh again,” his response was, “Oh, we will laugh again—but we’ll never be young again.”

Though this anecdote resonates deeply for me, it needs some perspective. Sondheim was 91 years old, and as close to universally canonized as any theater artist has ever been. And I am 65, and even in my most self-deluded moments, I recognize that for me, being young again was an impossibility long before the 20th Century ended.

And yet, as I say—it resonates.

Precisely because when I think of Sondheim, so many of my memories are not simply about shows of his I loved and learned from—they are experiences that literally shaped my life.

I was 14 or 15 when I bought the Company original cast album—on LP, of course. I remember riding my bike to a local record store. I realize now that a lot of the show went way over my head, but Sondheim’s sound world, witty lyrics (the ones I understood, at least) and the whole notion and New York-ness of it made me feel very sophisticated.

A year or so later, I saw opening night of the Los Angeles engagement of the first national tour—I was gay enough by then to be relieved that even if Dean Jones wasn’t in it, at least Elaine Stritch and Donna McKechnie still were!

More than two decades later, just after I’d moved to Philadelphia, I flew back to California for a couple of days to see the Long Beach reunion Company concert, which I attended with several of the same childhood friends with whom I’d collectively discovered Sondheim more than 20 years earlier. (And of course, this time Dean Jones was there… along with Stritch, McKechnie and virtually all the others.)

But I digress. Even more glamorously, I attended the 1972 opening night of Follies in Los Angeles , which was also the opening of the Shubert Theatre there. (Thirty years later in 2002, that Shubert was torn down to make way for more office buildings, which is pretty Follies-like in itself.)

Also in Los Angeles, I saw the tours of Pacific Overtures and Sweeney Todd, and at both I was the beneficiary of a well-known theatrical truism about Sondheim’s work—his shows were rarely if ever commercial blockbusters, especially outside of New York. For these two, I was seated dead center within the first six rows for my student ticket price of less than $10.

Los Angeles remained my base of operations till the end of the 1980s, but on a trip a few years before, I had managed to see my first Sondheim show actually on Broadway—Sunday in the Park with George, which had opened just a few weeks before, and was truly a life changing experience for me.

Good travel timing also enabled me to see Into the Woods, still in previews, which was not nearly as happy an experience; I remember feeling perplexed that Bernadette Peters seemed to have so little of substance to do (“The Last Midnight” was still to be added.)

Yes, as deeply as Sondheim has defined my own growing up, I was never an unalloyed fan. You might have noticed that I skipped over A Little Night Music, which did indeed come to Los Angeles with a tour—but though I bought the album, the show just didn’t ever grab me.

I’ve seen it a number of times since then, and it still doesn’t—at least not completely. Ditto Anyone Can Whistle, which I’ve seen three times and that’s going to be it); Merrily We Roll Along; Assassins; and Passion.

But then, isn’t that part of growing up too? I’ve learned at least as much about theater from figuring out what I don’t like about some of these shows as I have through the ones that I adore without reservation. And as so many others have also figured out, there are often many things to love in Sondheim shows even when the work itself doesn’t catch you.

As it happens, last week I taught two sessions devoted to Company; Monday, when students return from Thanksgiving break, we’ll begin sessions on Sunday in the Park with George. I’m already thinking ahead about how to start that conversation in light of Sondheim’s death. I’m sure it’s an experience I’ll remember for the rest of my life—right alongside those early performances that helped me understand what musical theater could be.