In the month and a half leading to Bernard Haitink’s passing on October 21, my AirPods constantly channeled a musical festival of sorts centered on the Dutch giant’s expansive discography. 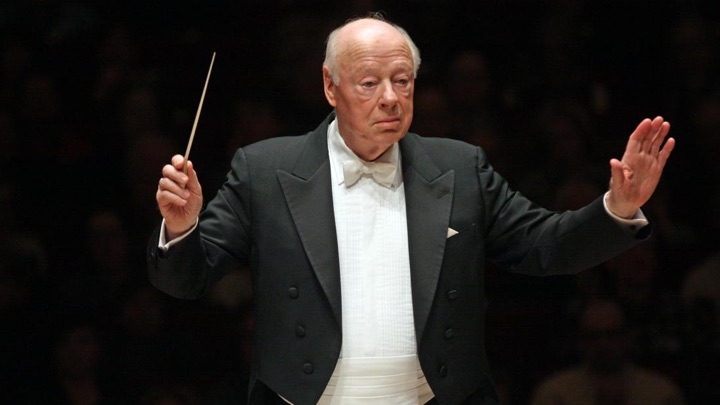 This assemblage of music was not deliberate. Rather, it seemed natural to include operas like his Berlin Bluebeard’s Castle, his charming Da Ponte trilogy from Glyndebourne, his outstanding Ring with EMI, his Covent Garden Peter Grimes and Jenufa, and his inimitable Boston Symphony Pelléas et Mélisande, simply because they rank among the best in class. While I could go on at length about Haitink’s much-lauded contributions to the symphonic literature, I will weigh this eulogy more towards his distinguished mastery of the operatic medium.

Bernard Haitink’s craft and musicianship embodied a self-effacing philosophy of interpretive candor and integrity. Apart from Claudio Abbado, few other conductors of his era paralleled his ability to transfigure a score’s nuances of color, dynamics, pacing, and mood into an objective, yet inspired vision that seemingly mirrors the maker’s intentions.  Though devoid of Romantic subjectivity or ego, the naturalness of Haitink’s readings often brim with such insight and variety that the listener is inexorably plunged into the composer’s imagination.

Another unique element of his musicianship was his penchant for extracting gradations of color and exotic tonal palettes from his instrumentalists—a quality nurtured no doubt by his ecumenical tastes for composers and the great soloists he helmed (e.g. George Pietersen, Edo de Waart and Thom de Klerk) at the Concertgebouw Orchestra.

In 1961, at the age of 32, Haitink inherited the ensemble of Mengelberg and Van Beinum as its youngest principal conductor—a post he would hold for nearly thirty years. This long association likely refined his ear and aesthetic for painting lines as disparate as gossamer filigrees by Debussy or Ravel to thundering, turbulent thickets from a Mahlerian or Wagnerian score.

Later, Haitink would assume the directorship of two of England’s most prestigious institutions for opera: the Glyndebourne Festival and the Royal Opera House. During this productive quarter century, he would further cement his reputation as an artist of breadth and imagination by expanding his gifts to works outside of his symphonic bread and butter.

With the UK’s premiere opera festival, he gifted the discography with entertaining and insightful interpretations of works spanning the canon from Strauss’ Arabella, Britten’s Albert Herring, Mozart’s Idomeneo to Stravinsky’s The Rake’s Progress.

Best among his recorded gems from the Glyndebourne era are his Da Ponte operas with EMI, perhaps on balance the finest representation of this trilogy on disc.  Individually, there may exist recordings from other conductors that slightly better each of the Haitink’s in terms of singing or orchestral interpretation, but no other vision of the three Italian scores unifies and consistently delivers beautiful, sincere and dramatic Mozart singing with an orchestral reading that sparkles with brilliance.

With the passage of time, some members of his casts (Claudio Desderi, Thomas Allen, Carol Vaness) have even secured their reputations among their respective characters’ most celebrated interpreters.

From 1988 to 2002, Haitink became the director of the Royal Opera House—a tenure that would yield not only a raft of recordings now elevated as classics, but also broadcasts and pirates featuring singers of an enviable, festival grade calibre.

Of his officially released recordings with the Royal Opera House, the most memorable are the legendary Jenufa with Karita Mattila and Anja Silja; an exceptional Peter Grimes featuring Anthony Rolfe Johnson and Felicity Lott; and a stellar Meistersinger with Gösta Winbergh, John Tomlinson, and Thomas Allen.

Although the Janacek score could have been imbued with more dramatic specificity and character in the vein of Jiri Belohlavek, Haitink’s romantic measure of the score still captures the pace of the powerful drama, and his ear for detail pinpoints fascinating soloist lines that are often lost in the momentum.

With his Peter Grimes, Haitink presents listeners with a less harrowing, perhaps more sympathetic vision of Britten’s score, rendered in EMI’s sonics with lucid orchestral detail. The wonderful Rolfe Johnson and Haitink, along with Lott’s Orford and Allen’s Balstrode, create a more psychologically nuanced and human reading of the opera compared to the neurotic classic recordings by Britten and Davis.

And what a stunning live Meistersinger Haitink gives us in the 1997 broadcast! Here, the conductor provides a brisk, sonically resplendent reading of Wagner’s social comedy, supported by the aristocratic Stolzing of Winbergh, the subtle and clever Beckmesser of Allen and the authoritative Sachs of Tomlinson. British critics cite this performance as the highlight of Haitink’s tenure as musical director of the Royal Opera—a claim that becomes apparent upon multiple listenings of the recording on Opus Arte.

Beyond the official releases from labels, one should seek the land of pirates for broadcasts from the BBC for even greater treasures.  A few notable performances that were part of my previous month’s listening routine include:

A French language Don Carlos featuring a nearly identical cast with the Pappano recording (Haitink conducts the score better, and the cast on the whole gels with more conviction than the Paris recording

An in-house Parsifal with Peter Seiffert, Robert Lloyd and Waltraud Meier (although that in-house recording is hard to find, this broadcast from 2007 has much good about it as well

Outside of Amsterdam and the United Kingdom, Haitink frequently guest conducted with some of the world’s most virtuosic and prestigious orchestras. While most of these concerts were crafted around symphonic programs, a few partnerships with these ensembles yielded outstanding operatic records too. An elegant Rosenkavalier from Dresden with Kiri te Kanawa, Anne Sofie von Otter and Barbara Hendricks comes to mind as one of the most commendable recordings after the Solti and the Karajan.

I already mentioned my admiration for his superbly shaped and spectacularly played BRSO Ring Cycle on EMI—a production with an extraordinary supporting cast, a Wotan (Morris) who sings with greater authority compared to his own self in the Levine recordings, a Siegfried (Jerusalem) who eclipses his performance in the Barenboim Ring, the most insidious Hagen in the discography (Tomlinson), and the most incisive Walküre Fricka on record (Meier). The polarizing factor for some listeners is Eva Marton’s Brünnhilde, a singer whom I enjoy greatly in the role and whom I vastly prefer to her chronological contemporaries.

Perhaps the most stunning of his orchestral collaborations is the Bluebeard’s Castle from the Berlin Philharmonic, played with the band’s spectacular virtuosity and performed with passion and depth by Anne Sofie von Otter and Tomlinson. This interpretation of Bartok’s score represents, in musical and artistic terms, the best the discography has to offer, surpassing in many senses the classic Kertesz recording with Ludwig and Berry. Both singers offer a richer, more verbally alert take to the score’s text coupled with Haitink’s melding of the orchestral tapestry to Bartok’s kaleidoscopic atmosphere.

My final opera recommendation from Haitink’s vast discography is a pirate of Debussy’s Pelléas et Mélisande from 2003. This tremendous performance features one of the most luxurious casts assembled for this opera, for a composer with whom Haitink developed the greatest affinity.

Though the old recordings by Inghelbrecht, Desormiere, and Ansermet are required listening for their adherence to French style, a cast that features the likes of Lorraine Hunt Lieberson, Simon Keenlyside, Gerald Finley, Nathalie Stutzmann, and John Tomlinson easily places this performance among the finest in the discography.

While the majority of this tribute focused on Haitink’s operatic career, one cannot write of Bernard Haitink’s life without mentioning his deep association with the symphonic literature, particularly the Mahler performing tradition.  While he was outstanding in interpretations of Bruckner, Beethoven, Brahms, Strauss, and Shostakovich, Haitink most of all deserves recognition as one of history’s great champions of Mahler.

His recordings of the Ninth Symphony and Das Lied von der Erde with James King and Janet Baker yield little to competitors, and there is much that is commendable from his first Philips Mahler cycles with his Dutch orchestra. I think of his Third Symphony with Maureen Forrester and the Fourth with Elly Ameling from the Amsterdam cycle, and the great Fifth and Seventh Symphonies from his Christmas matinees as gold standards for these scores.

And with his self-effacing approach, surely there were few others in the discography who mastered the Ninth as he did. His final Christmas matinee concert from Amsterdam ends the final adagio with a solemn hush, with a serenity that seemed to look towards  eternity.

The last Haitink recording I sampled before he passed away was a concert of Bruckner’s 7th symphony he conducted around Europe before he retired in late 2019. Challenge Classics recorded his final Dutch concert with The Netherlands Philharmonic Orchestra, which was the first ensemble where he served as musical director in 1957.

This bookend to Haitink’s musical career astonished because it revealed him still in full control of his faculties while fielding his orchestra through Bruckner’s complex score. It moved because the heart of the 7th Symphony—the elegiac Adagio—conveyed something poignant and ephemeral, perhaps Haitink’s meditation on existence before he bade his inevitable farewell

While we indeed mourn his loss, this also represents a celebration of a person who lived a lengthy and incredible life. It celebrates a generous musician who performed and recorded profusely, and it remembers an artist who transfigured music as candidly as few others did. Thank you Bernard Haitink, for all that you have done.