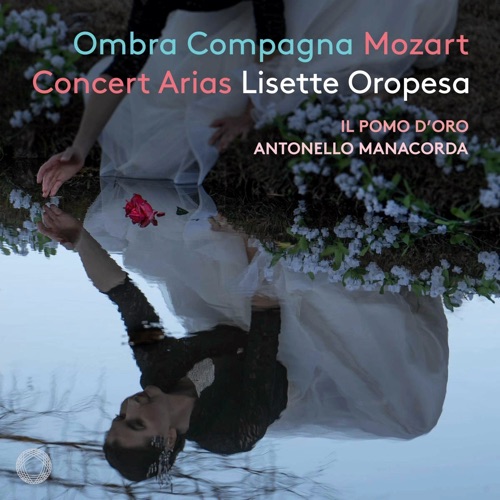 Though she released two albums of songs and arias with piano during the past six years, the diva’s recent rise to superstar status virtually guaranteed a glossy studio solo CD would follow.

While the collection showcases many of the soprano’s sterling qualities, I found it overall a disappointment.

Though her career these days centers primarily on 19th century French and Italian roles, Mozart played an important part in Oropesa’s career from the beginning: her Met debut in 2006 when she was a member of the Lindemann Young Artists Development Program was as one of the Cretan Women in Idomeneo.

Though I heard her for the first time later that season in a tiny role in Suor Angelica, I really sat up and took notice when she stepped into the role of Susanna in Le Nozze di Figaro in the fall of 2007 just a few days after her 24th birthday. It was a strikingly mature portrayal made even more impressive in that she held her own opposite Erwin Schrott’s showboating Figaro.

She subsequently shone in other small Met roles, but I made a special point to catch her again in Nozze two years later: again exquisite, one of the best Susannas I’ve ever heard. Naturally in 2010 I was excited to listen to a live broadcast from the Tanglewood Festival in which she performed Konstanze in Die Entführung aus dem Serail. To my surprise though, the role’s arduous bravura didn’t seem to suit her and its punishing high notes often emerged as strained.

Since then however some of my happiest Oropesa encounters have been her Amor in Gluck’s Orfeo ed Euridice at the Met and on broadcasts as Ismene in Mozart’s Mitridate, Re di Ponto and as Cleopatra in Giulio Cesare and Romilda in Serse.

Knowing how fine she can be in 18th century music, I was thrilled when Oropesa announced last year that the first project of her new recording contract with Pentatone would be all Mozart. The composer loved both sopranos and their voices, so naturally some of his finest music was composed for them.

Many of the concert arias, some written for insertion into other composers’ operas to appease recalcitrant divas, are extended mini-dramas involving a character under duress. A number feature a grandly dramatic recitatives followed by often wildly florid arias (usually in some variation of the da capo form) that demand a wide vocal range, sometimes of more than two octaves.

Several of the best known–“Bella mia fiamma,” “Vado, ma dove?” “Misera, dove son!” and “Vorrei spiegarvi, oh Dio!”—are among the ten featured on Ombra Compagna which runs an extraordinary 81 minutes! Though these great works don’t show up on concert programs all that often, many have been recorded by prima donnas from Elisabeth Schwarzkopf and Jennifer Vyvyan to Kathleen Battle and Cecilia Bartoli. In addition, Rita Streich, Margaret Price, Kiri Te Kanawa, Edita Gruberova, Lucia Popp, Natalie Dessay, Sylvia Geszty, and Cyndia Sieden have each released all-concert aria albums like Oropesa’s.

My discovery in high school of Edda Moser’s astounding “Popoli di Tessaglia” and “Ma che vi face” propelled me on a lifelong quest to hear all of Mozart’s soprano concert arias in as many versions possible. I was lucky to then tape a Boston Symphony Orchestra broadcast of Jessye Norman performing K. 505 and 528 and eventually snapped up the Price and Te Kanawa LPs.

After receiving Ombra Compagna’s WAV files a month ago (unfortunately a promised CD copy never arrived), I donned my headphones and listened five or six times. They soon sent me hurtling down a concert-aria rabbit-hole where I sampled dozens more. My first go at the Oropesa saddened me but soon I grew to appreciate the project’s virtues.

While performers sometimes treat these bravura works as opportunities for vocal display, Oropesa does pay welcome attention to their textual nuances: her handling of the accompanied recitatives is consistently gripping. To no one’s surprise, she tosses off the often fiendish coloratura with exemplary flair and her pearlescent trills are, as ever, a joy!

I was surprised that Pentatone failed to mention that Pomo d’Oro is a leading period-instrument orchestra and (as I later discovered) that the music is performed at a slightly lower A=430 pitch. Maraconda leads the performances with an attentive vigor while the polished ensemble expectedly upholds its sterling reputation. I had hoped that the soprano, encouraged by her HIP band, might have ornamented her music but little was added beyond a few appoggiaturas and a flourish here and there.

The 430 tuning unfortunately doesn’t mitigate the recording’s biggest flaw: Oropesa’s thin, wiry high notes. Her otherwise rich and limpid voice consistently turns distressingly pinched as it ascends, not just on the famous repeated E-naturals in “Vorrei spiegarvi” and the D and E-flat at the conclusion of “Alcandro lo confesso” but also in many of the Bs and Cs and even an occasional G and A!

A number of the singers who have excelled in this music, particularly the works written for Aloysia Weber, the composer’s sister-in-law, were noted Queens of the Night whose voices easily encompassed a demandingly high tessitura. Oropesa whose strength is her fascinating middle range unfortunately lacks the fearless top register of, say, Sabine Devielhe, another of today’s singers attracted to Mozart’s concert arias.

Another Oropesa virtue that doesn’t quite work in this program is her endearing vulnerability; she often projects a touching fragility that has made her the world’s leading Violetta. By contrast most of these concert arias demand a boldness that seems not to be in her arsenal. When I listen for example to Julia Varady’s eloquently noble “Bella mia fiamma” or Teresa Stich-Randall‘s fiercely aggressive “Ah se in ciel,” I’m reminded how small-scaled Oropesa’s versions seem, not unlike those included on Christiane Oelze’s overly modest CD.

Some of my letdown concerning Ombra Compagna springs from its repertoire. Before the CD’s contents were announced, I had hoped for inclusion of the sublime “Ch’io mi scordi di te” with its beguiling piano obbligato and the charming “Nehmt meinen dank” as well the pair of alternate arias Mozart wrote for Nozze’s Susanna: “Un moto di goiia” and “Al desio di chi t’adora.” I could easily imagine they would suit Oropesa admirably.

Despite my stark reservations. I would still relish the opportunity to hear Oropesa again in Mozart but at this point in her blossoming career I somehow doubt that she’ll be returning to Susanna or taking on Idomeneo’s Ilia, Pamina (especially) or Zerlina.