The vanities of the divas

Maria Callas and Montserrat Caballé are two of the most highly-regarded and esteemed exponents of the great soprano roles in both bel canto and in the operas of Verdi, and their recordings are held as artistic triumphs of the highest order. 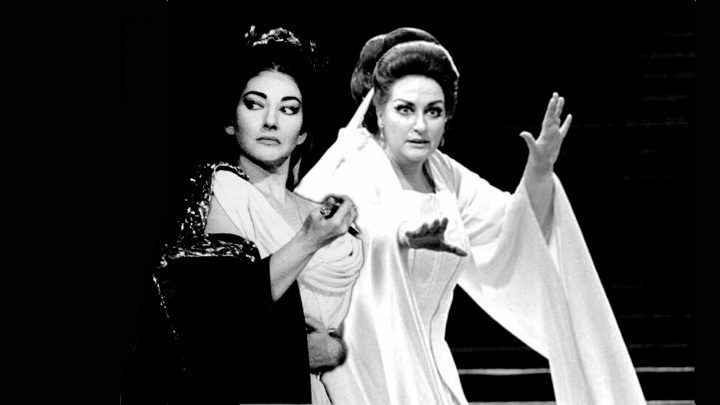 Two of the sopranos’ overlapping roles in their respective repertoires are those of Elisabetta in Verdi’s Don Carlos and the title role in Bellini’s Norma.

However much I love their individual contributions to the big arias, “Tu che le vanita,” and “Casta diva” from each one of them, I have a slight preference of one over another in each of their respective versions.

I extend the invitation to listen to both of them back-to-back:

To the “Casta diva”

As far as I’m concerned, Callas’s singing in this greatest and definitive of arias continues to reign supreme as the ultimate, ideal illustration of mastery of the Bellinian line. The Pasta key of F was exactly right for her range and which caressed her haunting, individual middle register, catching the most bewitching, singular timbre of coloration that was hers and hers alone.

The tightness of the legato, the expressive binding of the contoured line (completely absent of aspirates), the matchless ability to draw a flexible, tapered phrase – it’s all here. There’s an unbelievable alchemy at play, a kind of magically realized fusion, a sacred wedded bliss of music and artist; Callas’s love of this composer is borne out in her entire physical being, and in the infinite rapture of her sheer tonal dynamism. She was born to do this specialized Romantic period of florid song.

Many consider Caballé’s performance as Norma, captured in Orange, France as her greatest documented performance, a consensus with which I agree.  However, I have slight reservations in her approach to the aria.  From the start, the line doesn’t buoyantly flow forth as with Callas; there is a slight cluck here and there between the transitional notes, with some aspiration – “ca-ha-ha-ha-sta dee-hee-hee-va” – not pronounced to a great degree, but it prevents the phrasing from having a seamless fluidity; she seems to be murmuring at a few points, and the consonants are a bit slack here and there (“diba,” “bolgi”).

Though she easily soars freely in the ascensions above the staff, Caballé’s following vocalises above the chorus are a bit choppy and punchy; listen to the suave flair of Callas, in her cascades of devout veneration, to hear the difference. Caballé, however, does the closing phrases with her fabled soft intoning in the congenial upper middle of her range, seemingly holding her breath for forever and a day, with a floating plushness and tonal beauty that no one else possessed, not even Callas.

This got me to thinking; given that the voice was less attractive when sustained in the lower part of her range, I wonder if she had ever been advised to do “Casta diva” in the higher key of G (in F it seems almost a mezzo aria)?  It would have caught her precisely in the region of her voice that was so attractive. Useless conjecture at this point, but an intriguing “what if” at that.

To the “Tu che le vanita”

Elisabetta’s “scena ed aria,” with Verdi’s marking of “larga la frase,” is one drawn on the grandest lyrical scale at both ends of the piece, with a reflective, ruminative middle section.

Callas is the more vividly expressive of the two, but her singing is far less secure and stable than Caballé in her magisterial, rock-solid performance, one of her greatest captured on record.

The Catalan soprano is actually able to better follow Verdi’s copious notations, which range from “ppp” to “ff.” Callas is unsteady and unfocused, the vibrato loose, at both of those dynamics (and she was more often more successful in articulating her way up than in negotiating wide intervals).

Caballé, in the section “il pianto mio,” precisely follows the crescendo marking, beginning softly, then gradually opening up to a resplendent pouring-out of tone at the climax of the phrase, the repeat of it near the end of the aria in a full-throated ff.  Moreover, in the  word “mio” marked grandioso which goes from C# to A#, Callas lunges and rushes to the unwieldy upper note, whereas Caballé does a slight ritardando before heading to that upper note, giving the climax a most comely, sweeping shape; and her confidence in negotiating the hurdle so authoritatively is thrilling.

And in the words “cielo,” and “dolore,” marked dolcissimo, no one does them as sweetly as Caballé; with Giulini’s guidance, every instruction Verdi has set down is noted with infinite care, and the piece gains in its emotional-musical impact.

Then, too, I find Callas’s plunging into near-baritonal chest tones distractingly prominent, and of a different color and texture pieced separately from the rest of the voice.  The phrase “la pace dell’avel (“the peace of the grave”), marked p, is loudly throttled by Callas in a particularly disagreeable and abandoned chest tone. The section of this is a deep sigh of Elisabetta’s profound sadness and desire for peace in death; this Caballé accomplishes most poignantly and effectively, with quiet pathos.

My views on these two great artists are by no means definitive, but they complement each other in that they provide comparisons that foster further musical enlightenment, rather than that of competition; how fortunate we are to have vast documentation of their considerable artistic virtues.