Living in the future

What does the opera singer of the future look like? 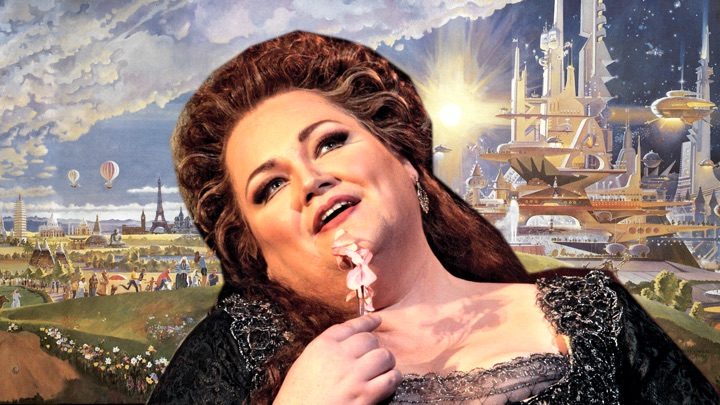 Impresarios, vocal coaches, conductors, audiences and (of course) opera singers have been asking themselves this question for years, eager to predict how the singer’s craft will adapt to the new complexities of our modern age.

In my (humble) opinion, they need look no further than Stephanie Blythe, Singer of the Future.

Anyone who knows me well, knows of my unabated obsession with Stephanie Blythe.

When I was a child (I’m in my 20s, so it wasn’t that long ago), I saw her perform via Met Opera Live in HD at my local cinema. I remember being utterly mesmerized by her. Even on the cinema screen (which is often such an alienating medium for opera), she projected a formidable vocal and dramatic presence, her rich, sonorous voice further igniting my love for opera.

Even then, I realized that there was something very special about Blythe’s voice. A warmth, a depth, but also an edge – an acuteness that cut through the sonic space like a razor.

Particularly memorable was her indomitable Fricka in the 2012 broadcast of the Met’s Ring Cycle – an uncompromising performance which seemed to tear at the constraints of Lepage’s famously static production (in my memory, Fricka spent almost the entire scene sat on an iron throne). I still remember the palpable intensity of that performance, particularly in the first scene of the second act of Walküre: the exchange between Frick and Wotan, which can so often feel like so much plodding recitative, played out like a gripping psychodrama with Blythe as the beleaguered goddess.

However, it was primarily through her recordings that I came to fall in love with Blythe’s voice. With the measly pay from my part-time job at a supermarket, I was able to buy up Blythe’s back catalogue and the advent of iTunes allowed me to get my hands on recordings that I would never have been able to find in stores.

First was a Brahms/Wagner/Mahler recording with John Nelson and the Ensemble Orchestral de Paris. The first track on this album – Brahms’ unrivalled Alto Rhapsody – always makes me wish the composer, who revolutionized so many other genres of music, had tried his hand at opera.

Blythe’s recording captures the latent drama of Brahms’ work. During the Tristan-esque opening, with its aching dissonances and harsh, spartan textures, her voice is cold and commanding, radiating a bleak, icy chill. And yet, when the male chorus enters with its chorale-like invocation, her voice takes on a new warmth, as if it were an entirely new voice altogether, suddenly lustrous, tender, rapturous. It is a sublime and profoundly spiritual moment, afforded by Blythe’s exceptional vocal artistry and keen dramatic sensibility.

On that same album, her recording of the Wesendonck Lieder notably undercuts the unabashed lyricism of Wagner’s Tristan gloss with a fresh attentiveness to Mathilde Wesendonck’s poetry. Her recording often has an intimate, conversational feel – more confessional than declamatory. Blythe sings the final song, “Träume”, as if she were whispering in your ear, excitedly disclosing some sensational secret.

The second album I bought – also a collaboration with John Nelson and the Ensemble Orchestral de Paris – was a collection of Handel and Bach arias. It was the Handel arias, especially, that captured my imagination.

Up until hearing this album, I had been skeptical of early music – a particularly disastrous performance of the Messiah which I had attended as a child had well and truly put me off Handel, so I approached Blythe’s recording with great trepidation.

Yet, this album showed me that Handel, when sung with care and precision, can be utterly captivating, just as exhilarating as the high romantic fare with which I was already enamored.

The crown jewel of Blythe’s Handel/Bach album is her recording of “Where shall I fly?” from Hercules (she sings both the accompagnato recitative and the aria as a single dramatic unit). It is nothing short of a tour de force – six and a half minutes of undiminished thrills which will leave you completely breathless.

This is followed up by “Hence, Iris hence away” from Semele, an absolute bop sung with brusque rage and utter precision by Blythe. Where so many singers have used the aria’s coloratura to paint Juno as some kind of hysteric, Blythe dispenses Handel’s clipped, halting melismas with curt, calculated venom (this is aided by the incomparable Emmanuelle Haïm on the harpsichord, whose punctilious continuo sounds just as mean as Juno herself).

Then there is her more recent album of classic Tin Pan Alley songs, As Long as There are Songs –a recording that, I must admit, initially shocked me. Sure, many opera singers have recorded popular music – but usually these recordings sit in an odd, hybridized space, doing a disservice to both the singer and the songs.

However, Blythe records these classic tunes – many of which are staples of the American Songbook – with a broad, romantic sweep. “The Thrill is Gone,” for example, sounds more like a Verdi aria than a 1931 Broadway classic.

After having listened to her recordings for so long, seeing Stephanie Blythe live was an entirely different ball game. Met Opera Live in HD – which carefully mixes every sound down to a nice, even volume – had failed to capture the power and versatility of her voice.

I first saw her in the Met’s Gianni Schicchi as Zita, the terrifying matriarch of the Donati family. It was an audacious, irreverent performance – uproariously funny. But Blythe never let the comic hijinks get in the way of her nuanced Puccinian sensibility: Gianni Schicchi is famously bitsy, and yet Blythe found lyricism and drive in even the most throwaway phrase.

There is no doubt, of course, that Blythe is very musical. However, what I love most about Blythe is not merely her musicality, but, rather, her ability to bring the same musical care and attention to such a wide range of repertoire.

Indeed, Blythe is so difficult to box-in precisely because her career has been so well and truly out-of-the-box. She is the ultimate all-purpose diva – courageous, risk-taking, hardworking, thoughtful, and able to traverse a diverse array of musical styles with great aplomb.

There is no better display of this versatility than the singer’s own Facebook page. There, she often posts covers of classic pop songs, singing piece-to-camera and accompanying herself on the ukulele. There is something incredibly raw and comforting about hearing one of the biggest voices in the business approaching this repertoire with nuance, humility, tenderness, and levity. In one video – a cover of the Sesame Street classic “Sing” – it is as if Blythe is gently caressing every phrase, rendering a performance that is simultaneously laid-back and thoughtful.

There is also Blythe’s recent solo venture, a no-holds-barred drag show in which Blythe plays the aging tenor Blythely Oratonio. I was hoping to make it to her sold-out show at the Apple Room earlier this year, but found myself a little cash-strapped at the time. Fortunately, Lincoln Center live streamed the performance on their Facebook page, and I was able to see the entire show from the comfort of my own living room.

And it was absolutely fabulous! Of course, it was camp. Very camp. A high-octane hour of glam rock, musical theater, and operatic hits belted out in full-throated chest voice by a bearded and bedazzled Blythe. The overall aesthetic lay somewhere in between Liberace and ‘80s punk – glittery and glamorous, but with a dark, rebellious edge.

However, I was not prepared for how moving the show would be. It was the kind of show where you are crying one moment and guffawing the next, with the tears from one number catching in your mouth as you laugh at another. The show was often autobiographical (and deeply personal) in nature, with Blythe displaying an honesty and a vulnerability despite the kitschy overtones. Like all great drag artists, Blythe was not merely “playing a role” – rather there was the sense that this gutsy, foul-mouthed, haute-butch rock star had been a central facet of her personality for a very long time.

That Blythe spent so much of her career playing pants roles no doubt primed her for this move into drag. Indeed, we often think of the voice as one of the most gendered parts of our being; and yet, opera often rejects the gendered nature of the voice altogether – a rejection that the flagrantly queer Blythely Oratonio unashamedly amplifies.

Recently, it was announced that Blythe would star, once again, in Gianni Schicchi – scheduled to be performed in a double bill with Suor Angelica at San Diego Opera in February 2021. However, Blythe is not slated to play Zita (as one might expect). Rather, the fearless mezzo is due to take on the opera’s title role, turning that perennial baritone staple into a pants role.

It was announced that Blythe would also play the Principessa in Suor Angelica, pivoting from matronly villain to wily trickster over the course of the intermission.

Such bold casting from San Diego Opera not only allows versatile singers like Blythe to branch out into new repertories and take on new challenges, it also offers a glimpse into a world in which gender is not a prerequisite for taking on an operatic role.

After all, Blythe has the Puccinian chops and comic verve to take on a role like Schicchi, so why shouldn’t she?

Just imagine a world in which your favorite singer (voice permitting) could take on any role that they please, regardless of what voice type it was written for. I, for one, imagine it being a bit like the Cher West Side Story special, the one where she plays all the parts.

The truth is that there are as many voices as there are people, and even the most detailed Fach system cannot capture the nuance of all this vocal diversity. Singers like Blythe are so important because they remind us how arbitrary our most entrenched vocal categories can be.

I predict that singers like Blythe will become all the more important to the opera industry in the coming years. As our cultural landscape becomes all the more pluralistic and as digital technologies begin to erode the barriers between artforms, singers who can be courageous, versatile, and, at the same time, utterly individual are going to be increasingly important to the future of opera.

Singers like Blythe – who are willing to tackle a wide variety of repertoire, who have a vibrant and authentic online presence, and who bring sincerity, individuality, professionalism, and artistry to everything they do – will be the ones who thrive in the opera industry going forward.

In Blythe, I hear the potential for opera to adapt to and take on this fast-changing world. The less our singers are constrained by traditional career paths, genre boundaries, or divisions of labor, the more they can rise to meet whatever challenges the future may hold.

Illustration based on a photo by Ken Howard / Metropolitan Opera