I can safely say that this is the gay drama I’ve been waiting for: a genuinely devastating drama that doesn’t treat its characters like lambs waiting for the slaughter or overdose on weepiness, and a queer narrative that unapologetically centers the queer perspective. 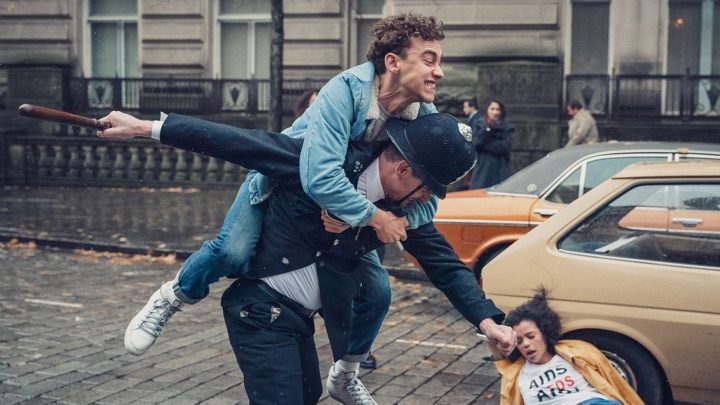 Cameron Kelsall: David, one of our first ventures together was a collaborative review of The Inheritance, Matthew Lopez’s sprawling, two-part theatrical exploration of the gay generational divide. Although AIDS was not the central theme of that play, much of its drama hinged on the chasm between older gay men who lived through the epidemic and younger gay men who came of age in the shadow of its darkest days, and how those experiences irrevocably shaped their worldviews. At the risk of sounding cold, my memories of The Inheritance (a year and a half removed from seeing it) align largely with my perception of many AIDS dramas: regardless of whether they’re contemporaneous accounts or backward glances, they often indulge in maudlin sentimentalizing that serves to cheapen a devastatingly human reality. So one of the reasons I was drawn to Russell T Davies’ miniseries It’s a Sin—which recounts the grim early days of the epidemic in London—was the advanced press that suggested an unromanticized evocation of that era. (The five-episode series premiered on Channel 4 in the U.K., and is now available through HBO Max.) As an American, I was also eager to gain a broader perspective of how AIDS was treated internationally. Although I have quibbles here and there, I can safely say that this is the gay drama I’ve been waiting for: a genuinely devastating drama that doesn’t treat its characters like lambs waiting for the slaughter or overdose on weepiness, and a queer narrative that unapologetically centers the queer perspective. In short, a must-watch.

David Fox: I agree with you about the generally high quality—often exceptional—of It’s a Sin, which also counterpoints in my mind with The Inheritance… but I see them through a somewhat different perspective. Often, my initial interest in theatrical works that focus on AIDS is how the creators will tell their stories in terms of looking at the personal dimension, and also situating it within a larger historical and sociocultural frame. Both are necessary elements, but tricky to calibrate. We’ve talked a lot about this topic, and I think you have more reservations about Angels in America than I do—to me, the first part (Millennium Approaches) is stronger than the second (Perestroika), but both find a nearly ideal balance, which is especially impressive given that the work was written while the epidemic was raging. I think Kushner’s play has also stood the test of time—notwithstanding Marianne Elliott’s fumbled revival (I wrote at the time about the HDcast—click here if you’re interested). For myself, I’m less taken with The Normal Heart, which is heavily dominated by politics; and the very first AIDS story to make it to Broadway, As Is, was criticized for being too personal and disease-movie-of-the week in tone.  Anyway, I offer that long preamble by way of saying that I think It’s a Sin is overwhelmingly moving and powerful in part because it really finds the right mix, with the human dimension front-and-center, but the larger cultural history always present as well. The British setting is indeed a fascinating new insight for this American viewer, at least.

CK: One thing I think Davies absolutely nails is that his characters aren’t immediately aware that they’re living in an epochal time too abruptly—the realization of AIDS and its devastating effect on gay life in London is gradual, and harrowing. Although I don’t think The Normal Heart has aged particularly well, I do appreciate the way it captures a particular moment in time with undeniable urgency, and I think we have that working here, too, which is all the more impressive given the historical lens. The true impact of the epidemic creeps up on the characters, and the audience too, even though we know from the start how stories like these are likely to end.

DF: Cameron, I know exactly what you mean about the issue of heavy-handed foreshadowing, and I agree completely that one of the great things about It’s a Sin is the way it keeps us completely in the moment in ways that will become horrific, but also contain a lot of joy, celebration, and innocence. One bit that took me by surprise and brought tears was, oddly, in the soundtrack: at a louche party, the group was playing around to “Hooked on Classics”—a record I had totally forgotten, but the memories of that time came flooding back immediately. It’s a Sin finds those resonances, over and over.

CK: Perhaps it’s because we’re currently living through another pandemic, and one that increasingly feels like it will never end, that some of the minor details here hit so hard. The desire to downplay, to question, and to dismiss every new revelation about AIDS—or to invent some form of magical thinking to insulate yourself from the possibility that you, too, could be affected—reminded me of the heady early days of Covidworld, this time last year. The series was shot prior to the start of lockdown, but it’s impossible to ignore the resonance here. And when those moments of magical thinking melt away, the cold hard truth slaps you in the face. I keep thinking back to a particular scene in which Ritchie, the de facto main character, finally understands that AIDS will become an inevitable part of his life. (I should pause here and say that if you haven’t watched the show already, we are unavoidably going to reveal some spoilers.) A young actor making his name in the London theater community, he starts hooking up with one of his peers, and despite trying to be careful, they end up having unprotected sex. It’s some time later that, during a casual conversation, Ritchie notices a small lesion on his lover’s back. Davies doesn’t linger in the moment, and Olly Alexander, the actor playing Ritchie, all but throws away his reaction. It’s an arresting moment because it’s fleeting—that’s how quickly your life can change.

DF: Sadly, when you talk about an AIDS story that ends in the early 1990s, the entire notion of “spoilers” really doesn’t exist—we all know how this is going to turn out, and it’s only a question of when. That’s undoubtedly a challenge for anyone working with this topic, and I don’t think Davies entirely avoids the clichés. Our main male characters—Ritchie, Colin, Roscoe, and Ash—are each a distinctive “type.” I guessed initially (and correctly) that the one who is least sexually experienced would turn out to be the one who dies first. (I guess that actually is a spoiler.) And I’m usually resistant to the common trope of an angelic female friend who proves to be the glue holding everything together. But here, that character is so beautifully rendered by actress Lydia West that I put aside my prejudices. And in fact, that’s true throughout It’s a Sin. It’s so well done that even elements I would usually object to captured my heart.

CK: I certainly recognize the female trope you reference here, but I actually think It’s a Sin avoids it skillfully—and not just because West is so appealing as an actor. Her character, Jill, does function as an advocate and emissary for the gay community, but West and Davies go out of their way to decenter her or make her seem overly heroic. The one element that didn’t totally work for me was Ritchie’s instant radicalization from somewhat reactionary Tory to AIDS freedom fighter in the wake of his official diagnosis.

DF: I agree that the transitions here sometimes happen too fast, though frankly given the subject matter, five episodes of around 45 minutes each is really as much as I could take—more would have required an antidepressant. And also, really, have been unnecessary—each story is given a completed (if far from idyllic) arc that makes its point. And crucial to the success is the strength of the ensemble cast. In addition to West, I particularly admired Olly Alexander, who brought a fresh and unexpected manner to a character who could have become a stereotype—ditto Omari Douglas as the most… shall we say extravagant… of the group. I’m sure thousands of people will fall in love with the heartbreakingly boyish Callum Scott Howells. Frankly, I was less taken with Keeley Hawes, in what struck me as too obviously an actor’s tour-de-force as a mother confronting her own prejudices; and by Stephen Fry in a self-conscious cameo. (Neil Patrick Harris, another star actor, does much better as a stiff upper lip, old school tailor’s assistant and “member of the club.”)

CK: I’m not generally the biggest fan of Harris, but I found him quietly moving in his small arc—even if it is somewhat obvious, too. And considering how often English actors show up on American television, it was fun to see an American taking a role from a Brit.

DF: Cameron, I feel like there’s much more that we could say—but on the other hand, that we’ve already said a lot. Despite the inevitability of the ending(s), it’s probably best to experience It’s a Sin without knowing too much—instead, let the plot and the characters pull you in, as they will. I do have one request of our British readers—my reaction, especially to the early scenes, set in the 1980s, is that the London hospital settings look much earlier than that—1950s, in some cases. Am I misreading it? I’d love to know.