We shared a feeling that writing about The Fugitive Kind was a date with destiny. 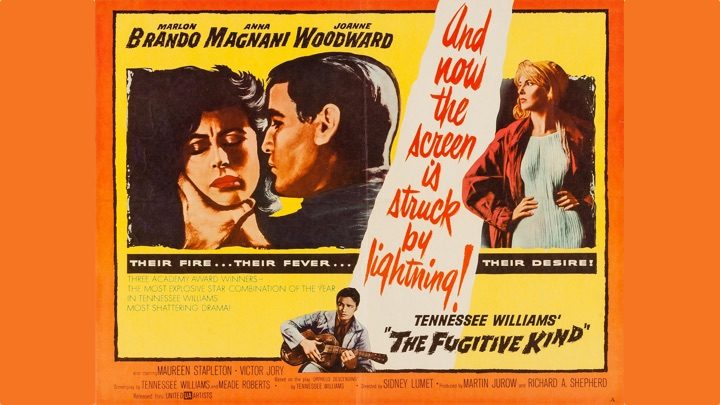 David Fox: How could we not deal with this veritable “Cabinet of Tennessee Williams‘ Curiosities,” adapted from one his most baroque plays, Orpheus Descending, and featuring a cast that, person for person, is basically a dream team. Yet I approached it with equal parts excitement and dread. I’d only ever seen it years before on television, and I think I drifted away early, but my memories were not very positive, starting with the name. Not that there’s anything particularly wrong with The Fugitive Kind as a title, but it’s certainly a literal substitute for Williams’ poetic and abstract one––which, I thought, boded badly for the movie itself. And the first minutes seemed to confirm my fears––a flat-footed courtroom scene that fails to take off in any real way, with Marlon Brando looking uncharacteristically disengaged and bloated. But of course, this time I persevered––and I’m so glad I did! Honestly, I think this is one of the best versions of Williams’ play on film––astonishingly so, given the difficulty of the material. Bravo to director Sidney Lumet and Williams’ co-screenwriter, Meade Roberts––I wouldn’t have believed it, but this version of Orpheus Descending takes off like a rocket!

Cameron Kelsall: Orpheus Descending is one of the Williams rarities I’ve yet to encounter onstage, and I went into The Fugitive Kind with only the barest knowledge of the basic plot. I agree that the framing scene lacks much tension and could easily be excised, but from there, I found it gripping––a perfect marriage of Williams’ romantic ardor and classic Southern Gothic tropes. The pairing of Brando and Anna Magnani––the king of the Method and the queen of Italian Neorealism––proves fairly unbeatable in terms of charged, emotionally volatile acting. In some ways, Williams’ small-town Mississippi, and Lumet’s aesthetic conception of it, feels closer to the gritty European realist style than similarly set works like The Rose Tattoo or Suddenly Last Summer.

DF: Especially since Lady Torrance, the female protagonist, is herself so clearly identified with her Italian roots. Seen here, the play has that particular resonance in a way I did not get from Vanessa Redgrave on stage, who was otherwise absolutely sensational. Redgrave was playing it, but Magnani was living it. It’s also hard to imagine that quality from Maureen Stapleton, who here is very effectively recast in the odd but sympathetic role of a kindly Sheriff’s wife who has religious visions, yet literally goes hysterically blind. With that, I doubt I need to remind you again that we’re in a Tennessee Williams play. You will know soon enough when you immerse yourself in the world of the town biddies, who have some pretty fabulous lines. A few favorites, spoken about Lady’s evil, bedridden husband, Jabe, who has just returned from the hospital and lies in a bedroom above their shop: “That man will never come down those stairs again. Never in this world. He has the death sweat on him… Was it too late for surgical interference?… We pray that it ain’t hopeless.”

CK: This might not be the best screen adaptation of a Williams work––Streetcar will always take that title by a country mile––but it might be the most effective translation of the strange, liminal style of his that seems to have one foot planted in the straightforward world of Streetcar and Cat on a Hot Tin Roof and the other in the more experimental realm where the author spent most of his later career. A great example of this is the character of Carol Cutrere, played here by the astonishing (and strikingly beautiful) Joanne Woodward, in what I think is her best performance ever. It’s nice to be reminded of how fresh and daring she was before she turned into a national monument (apologies to Pauline Kael). Woodward is fiery and always seems on the edge of going overboard, but she pulls back at just the right moment, and is also extremely sympathetic. She also manages to create a damaged character while steering clear of bathos. This movie explodes with chemistry––between Woodward and Brando, as well as Brando and Magnani. 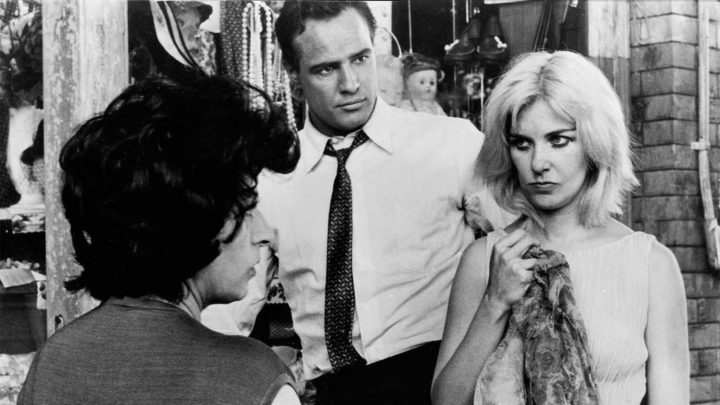 DF: Absolutely agreed that Woodward is a revelation. But before we get to that astonishing central pairing, I’d like to say a bit more about the supporting cast. I’ve already described this as a dream team, and really, that extends to the smallest roles––most especially the gossipy ladies of the town. In what must even at the time have been Lumet’s special gift to homosexuals the world over, we get not only Madame Spivy––Dyke Ya Know Extraordinaire––but also fabled Strasberg acolyte/cabaret diseuse Janice Mars! I mean, c’mon! (And as if that isn’t enough, Lucille Benson and Sally Gracie are feature, too.) Victor Jory has never been creepier than he is here as Jabe Torrance. Two Broadway holdovers make their marks with flavorful performances: R. G. Armstrong as the bigoted sheriff, and Virgilia Chew as a suspicious nurse. We also have the aristocratically handsome John Baragrey as David Cutrere.

CK: Lumet and his cinematographer, Boris Kaufman, certainly did their best to transform the handsome Jory into the repulsive Jabe Torrance––the aforementioned “sweat of death” is ever present, and he’s almost always seen in a tight close-up that accentuates every crack and crag on his face. Another member of the supporting cast we should mention is Emory Richardson as Uncle Pleasant, also called the Conjure Man, who brings the right otherworldly, slightly unsettling presence to the wordless role. His performance really suits the vaguely spectral nature of the film.

DF: Time now for the main attractions, yes? Let’s start with Magnani, since it was our recent conversation about The Rose Tattoo that led us to this one. I’d say she’s every bit as strong here, maybe even more so––in large part because the screenplay quite daringly gives Williams his day, offering very long conversational passages that establish mood and are allowed to unspool slowly and quietly. Few film directors would be ballsy enough to do this, and few actors could keep the focus. But here we have all of that, and it’s simply magical. Magnani’s outsider-ness is reinforced from the movie’s beginning, where she’s seen trailing behind a veritable cortege of people bringing Jabe Torrance home. The pre-funeral imagery is set from the start, with Magnani already looking dressed for widowhood. But it’s the conversations with Brando as Val Xavier, mostly delivered so softly that we need to lean in to hear them, where we really understand her heartbreak––and her halting hopes for happiness.

CK: Yes, I think one arresting aspect of Magnani’s performance here, in contrast with her (justly) legendary work in The Rose Tattoo, is that the character of Lady Torrance is so direct and self-possessed. More than almost anyone this side of Bette Davis, Magnani knew exactly how to pull off that innate toughness. But she’s also absolutely spellbinding in those quiet scenes with Brando, and utterly convincing when she seems to genuinely open up and place her last hopes of romantic love in him. One moment I kept coming back to was in the penultimate scene, when––spoiler alert!––we learn that Lady is pregnant with Val’s baby. It’s a tender moment, and Magnani really sells the idea they could have a happy future together, which is made all the more chilling by the violence about to befall them both.

DF: We know that, famously, Williams wrote The Rose Tattoo with Magnani in mind. He certainly might have done something similar with Brando and Val Xavier. The actor had, of course, made a sensation in A Streetcar Named Desire––I don’t think it would be exaggerating to say Brando’s imprint on that play actually alters how audiences have understood it since. In some ways, Val is an even better fit, since the character offers the actor more opportunities to showcase his mercurial vulnerability. As I said, at the beginning of The Fugitive Kind, it seems like it might not work the way you’d hope––but once into the role, Brando does everything that I hoped he would. His trademark ability to destabilize and make every moment feel dangerous is fully engaged––but so is his charm and softness. It’s an fabulous combination.

CK: I have nothing to add, except that this performance really should be studied alongside Streetcar and On the Waterfront by anyone who wants to fully understand just how effective––and unsettling––Brando was in his early days on screen. (Thankfully the film, long hard to find, is now readily available through the Criterion Collection.) There are so many moments that probably shouldn’t work, but it all comes together in a riveting, unforgettable way.

DF: Before we go, I’d like to say just a bit more about the play itself. Not about the plot––I doubt I could summarize it even if I tried, and we’d be here all night. This is Williams at his most abstract, disjointed, elliptical… but also poetic. If the change in title suggested that the movie would veer away from that, the more positive reality is that Lumet, Roberts, and company largely let the script stand. I miss the play’s original opening, where two of the biddies function very effectively as a Greek chorus, anchoring the mythical imagery of the title. And it’s certainly fair to say that Orpheus Descending is not for everyone, and will have many Williams doubters rolling their eyes and feeling that there’s ample justification for their scorn. But as is so often the case with him even at his most arcane, there are flashes of astonishing power and clarity. The play is, of course, now 60-plus years old, and one might think––even hope––that time has softened it. But my reaction is just the opposite. Watching this less than a month after the Capitol Insurrection, The Fugitive Kind‘s warning messages about racism and toxic anti-immigrant sentiments has rarely felt more urgent.