Everything’s coming up mélodie! As the pandemic rages on and new lockdowns have thrown large-scale performances into disarray, record labels have been releasing new albums of French art song by the bucketload. 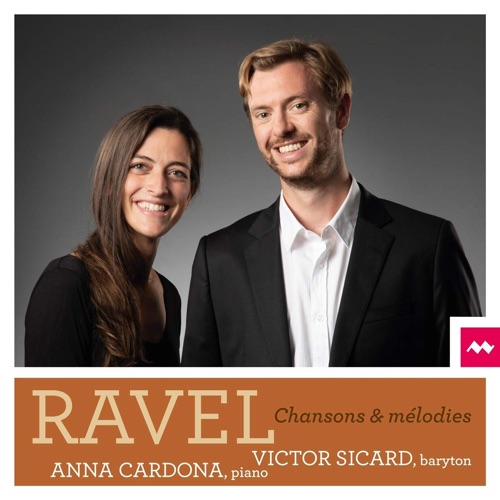 With mélodies from Gounod to Milhaud and almost everyone in between, the repertoire covered by these three recent albums spans perhaps the most glitzy, glamorous century in French history.

Recent depictions of France in Anglophone media have veered from snooty disapproval (the particularly bloodthirsty news coverage of the Mouvement des gilets jaunes, for example) to twee sentimentality (i.e. Netflix’s Emily in Paris, inexplicably renewed for a second season). France, as it is shown to us by Hollywood, CNN, and BBC, is somehow set apart from the modern world – unerringly backwards, stuck in some vague, purple-tinged past.

But, in the period of history represented by these three albums, France was the modern world. There was no other city in the world where you could see Spanish dancers at a boulevard theater, an Indonesian gamelan ensemble at the Exposition Universelle, a Stravinsky ballet at the Ballets Russes, a piece of experimental cinema at a converted cabaret theater, and paintings by Picasso, or Monet, or Matisse at a fashionable salon.

This was the period of French history that brought us symbolism, impressionism, art nouveau, bacteriology, the moped, neon lights, cubism, modern dance, surrealism, and prêt-a-porter fashion – an age when internationalism and modernity went hand in hand (this internationalism, of course, had its downsides – France’s colonial occupations in Africa and South-East Asia, for example).

These three albums betray a nostalgia for this gilded age of internationalism. It is no coincidence that the one composer who appears all three albums is Maurice Ravel, a composer enmeshed in French modernity but obsessed with the folk music of various cultures, Western and non-Western (that the most famous work by this composer is a boléro is no accident). Ravel thus epitomizes the kind of globally minded, forward-looking artist who flourished in this dazzling period of French history.

Listening to this album, one gets the sense that Ravel spent most of his time sitting at the piano imagining the world beyond. However, the repertoire on this album is also market by a stylistic unity: internationalism is so ingrained in Ravel’s compositional voice that it is often difficult to distinguish between what is Ravel and what is cultural pastiche.

To be sure, there is a degree of uncomfortable exoticism in this repertoire, especially in the 1925 Madagascan Songs. France’s bloody colonization of Madagascar raged throughout most of Ravel’s lifetime, and these songs are a disquieting byproduct of this violence (although the poetry itself is from the 18th century, written by Évariste de Parny, a French colonialist in India – one of the songs is disturbingly titled “Beware of the White People”).

Yet Sicard plays down the cultural and national differences represented in these various songs, opting for a relatively even-handed French lyricism. Moments of flagrant exoticism are either smoothly integrated into longer romantic phrases (as with the florid arabesques of the Cinq mélodies populaires grecques or the Deux mélodies hébraïques) or cast off as bouts of operatic extravagance (as in the Madagascan Songs or Don Quichotte à la Dulcinée). Even the Scottish “folk song” – a setting of a Robert Burns poem – is sung in such a charmingly thick accent that it could easily be mistaken for French.

This is not to say that this recording lacks color or variety: Sicard’s rich, golden upper register provides a strident contrast to his sweet, fuzzy middle. Even if the lower end of his range can be a little brittle in the more forceful numbers, this only adds a little punch to Ravel’s downward-bearing phrases.

Sicard approaches this repertoire with an unerring elegance, every phrase sumptuously crafted and affably delivered – to the extent that even the more disquieting numbers have a delicious sparkle.

This is greatly aided by pianist Anna Cardona, whose touch is warm and buoyant, bringing out Ravel’s sunny middle-register harmonies. Tempi are brisk and stylish – never overly indulgent – yet still betray a subtle rapport (and a gentle interplay) between singer and pianist. Ravel’s style is often so flamboyant (some might even say effete) that his music benefits from such a straightforward, genial approach.

Highlights from this album include a poignant rendition of the “Chanson hébraïque” from Cinq chants populaires (in which both pianist and singer take a delightfully no-nonsense approach to the song’s quick-fire changes in tone); a pithy, sardonic performance of Ravel’s L’histoire naturelle that leans into the cycle’s acid-tongued dissonances; and a bright, breezy rendition of “Tout gai” from the Cinq mélodies populaires grecques.

The Cinq mélodies populaires grecques also make an appearance in Sabine Devieilhe’s album Chanson d’Amour, programmed alongside Fauré, Debussy, Poulenc, and yet more Ravel. However, Devieilhe’s version is more erratic, veering wildly between glassy coloratura and popstar croon. It is an approach that sometimes pays dividends (as in her colorful, irreverent “Tout gai”) and sometimes comes across as over-indulgent (as in her meandering, uneven “Chanson de cueilleuses de lentisques”).

It is in the slower, more speech-like mélodies – especially those that are lower in tessitura – where this album languishes. In the depths of her range, Devieilhe’s tone can be thin and inconsistent and her declamation can sound slightly affected, with intervallic leaps and changes in dynamic greatly over-emphasized.

The first of Debussy’s Deux romances, for instance, felt a little jagged, with clear, resonant high notes loudly punctuating some muddy low-register singing. “Hôtel” from Poulenc’s Banalités sounded all too banal, with choppy phrases that seemed to lack direction.

This was not entirely Devieilhe’s fault, however. Some of the blame lies with her longtime collaborator, pianist Alexandre Tharaud, whose playing could be indistinct and often a little toothless. There seemed to be a mismatch between Tharaud’s lightness of touch and the excessively meditative tempi negotiated by the two performers: for example, the mounting harmonic tensions of “C’est l’extase langoureuse” from Debussy’s Ariettes oubliées were undermined by a lack of forward momentum, exacerbated by Tharaud’s cautious pianism.

Yet, for all its faults, Chanson d’Amour succeeds by dint of those faster, more melodic mélodies in which both Devieilhe and Tharaud come into their element. Devieilhe sings with such laser focus in her upper register that those mélodies which veer towards this golden part of her voice are often strikingly vivid, even larger than life. When Devieilhe ventures into this more sonorous register, Tharaud sometimes matches her tone with a brighter, more crystalline touch, well suited to this repertoire.

In these faster tracks, Devieilhe exhibits remarkable precision and flexibility, reminiscent of her exquisite 2017 album Mirages (a wonderful collaboration with the Les siècles orchestra). This was especially evident in the five Fauré songs, which have a sparkling, frothy quality: her “Notre amour” floats along on fresh, bell-like tones, while her “Chanson d’amour” is aglitter with sweetness and joy.

An ecstatic rendition of Debussy’s “Nuit d’étoiles” rhymed well with these upbeat Fauré tracks, as did a sugar-coated performance of Poulenc’s “Léocadia”. Manic, slightly erratic renditions of “Fêtes galantes” from Poulenc’s Deux poèmes de Louis Aragon and “Paysages belges” from Debussy’s Ariettes oubliées provided a welcome injection of energy to an album that often felt all too leisurely.

While Devieilhe and Tharaud’s performances may be a tad uneven, the album itself is beautifully curated, showcasing a delightful smorgasbord of French song, from the gushingly romantic to the bitterly dissonant. Indeed, such a patchy performance is easily forgiven when the repertoire on offer is so varied.

Tyler Duncan’s English Songs à la Française suffers from the opposite problem. While the repertoire featured on this album is also diverse – featuring English-language songs by Gounod, Massenet, Saint-Saëns, Fauré, Hahn, Roussel, Ravel, Poulenc, and Milhaud – the performances are all too uniform for such an eccentric assortment of songs.

Duncan’s interpretation of these rarely-heard gems could be a little one-dimensional and perhaps a little prim. Every word is over-enunciated in all-too-perfect Queen’s English, creating a sense of propriety that jars with the searing, prismatic lyrics of these songs.

This was especially evident in his performance of Milhaud’s Child Poems, a bizarre set of five (rather dissonant) settings of Bengali poet Rabindranath Tagore in which the singer must envoice both parent and child. Duncan might as well have been reading the phonebook, however, for the lack of contrast or character that mark his monochromatic rendition of this idiosyncratic cycle.

While Duncan’s voice is robust throughout, it could be a little gruff in the lower and middle registers and a little wide in the upper register, adding a harsh quality even to the gentlest of numbers. Hahn’s Five Little Songs – a collection of cute musical dumplings – were sung so blandly (and often so brashly) that even these adorable little numbers felt tedious.

The accompaniments of Erika Switzer rarely interrupted this monotony, often fading into the background. The flowing arpeggiated accompaniments so favored by these composers frequently lacked clarity – the quick, cascading patterns of Massenet’s “Come into the Garden, Maud,” for example, simply dissolved into an indistinct harmonic muddle.

However, there were a number of unexpected pearls in this sea of clams: the brooding atonality of the two songs by Roussel is ominously rendered by both Duncan and Switzer; Gounod’s delightful sexual satire “Beware!” is disconcertingly fizzy; and the Two Love Poems of Milhaud possess a gooey warmth, the second allowing Duncan to mellow in his darker lower register.

Two lullabies by Gounod – “Sweet Baby, Sleep” and “Good Night” – have a lilting simplicity: Switzer makes deft work of the siciliana rhythms of the former while Duncan oozes charm in the latter. Duncan’s performance of Ravel’s Scottish “folk” song is not quite as finessed as Sicard’s, but it has a hearty, down-to-earth allure.

And while Duncan’s declamation could be a little stuffy, it was always crystal clear, making it easy for the listener to enjoy these marvelous texts.

Listening to this album, I was struck by just how many of these iconic French composers had set English texts: even Massenet, who was a bastion of French operatic nationalism after the rise of French Wagnerianism, went about setting Tennyson for performance in the salons of the Belle Époque.

Yet, these English-language French songs are a testament to a period of French history when cosmopolitanism was a sign of modernity – composers who could traverse national styles and cross multiple language barriers were seen (at least by some) as the future of French music.

So why are singers today so easily seduced this age of French musical internationalism? What draws them by the droves to the Greek songs of Ravel or the English songs of Milhaud?

As we once again witness the rise of right-wing nationalism across Europe and the United States, perhaps singers are increasingly turning to repertoires that project a vibrant urban cosmopolitanism as a kind of socio-political salve?

Or perhaps this age of French musical internationalism simply produced music that is so bold, so stirring, so electrifying that it still takes pride of place in our cultural consciousness?

Either way, these three albums offer a unique insight into this repertoire and will surely be of great interest to any aficionado of French art song.