We put together these two very different movies from more than half a century apart—Of Human Bondage (1934) and The Whales of August (1987)—and thus get a sense of the long arc of a career. 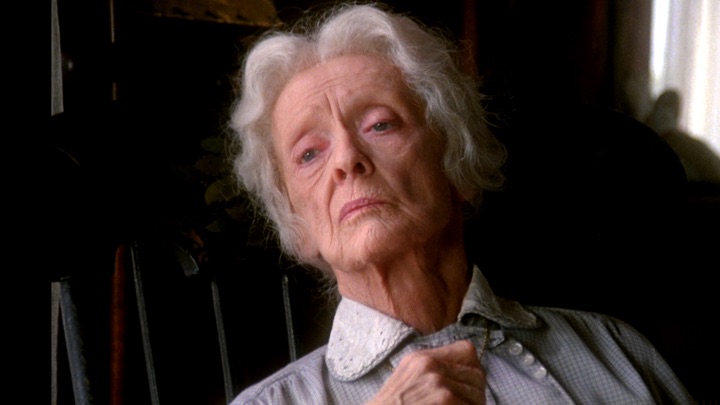 David Fox: Cameron, it was your inspired suggestion that we put together these two very different movies from more than half a century apart—Of Human Bondage (1934) and The Whales of August (1987)—and thus get a sense of the long arc of a career. This is “Bette Davis: Coming and Going,” as it were. There’s so much to be said about both these memorable and very different performances, and the movies themselves, too! But one thing that jumped out was a reaffirmation for me that Davis represents the near ideal of what I think of as “movie star acting.” What I mean by this is a delicate balance between immersive character work, such that each performance feels different; while at the same time always reminding you of the actor’s own, indelible personality. I think audiences really want both, and with Davis, they certainly get it. Here, she is, at one end, an incendiary, sexy Cockney waitress and walking time bomb; and at the other, an ornery, rigid Maine dowager. But in both she is—gloriously—Miss Bette Davis.

Cameron Kelsall: In both films, Davis gets a superb entrance, one that immediately captivates the viewer and communicates her star power. In Of Human Bondage, she’s seen across a tea room, the instant objection of Leslie Howard’s affection. Her alabaster skin and platinum hair practically pop out of the black-and-white frame. In Whales, she appears almost as if an apparition—the once-platinum hair now shockingly white, the delicate features somewhat ravaged by time (and the devastating stroke that affected Davis in the last decade of her life and career). Even ghostlike, though, she is still utterly captivating and utterly herself. I think that is one of the most interesting things to consider when you look at these opposite poles: from the very beginning to the very end of her career, her sense of assurance and self-possession was undeniable. It was there all along—which is likely why she, alongside the similarly uber-confident Katharine Hepburn, is often regarded as the greatest screen actress of all time.

DF: Shall we start at the very beginning? OHB (let’s call it that for brevity) isn’t Davis’s first movie, but it really set her career in motion, and it’s easy to see why. The first scenes have a formulaic, expository feel, which—despite Howard’s intriguingly naturalistic, compelling low-key performance as Philip, a doctor who seems adrift in his life—doesn’t promise much. Then, around eight minutes in, we get Davis—literally, “enter laughing”—and suddenly, the whole thing has a sense of excitement and lift-off. Watch the way she looks at Howard… or, more correctly, manages not to look at him. I’m willing to state that in OHB, Bette Davis literally invented the concept of “side-eye.”

CK: If you’re attempting to draw a straight line from Bette Davis to the Real Housewives of New Jersey—well, let me tell you, I’m all for it. Seriously, though, she raises insouciance to an art form, but what’s most interesting to me is that she never rests on the easiest choice. She could easily play the tarty waitress as a vulgar, mean-spirited tramp, but instead she layers in sympathy, disgust, self-doubt and a raft of other emotions. In doing so, she also elevates Howard’s performance. I usually find him almost unbearably stiff, but he comes to life as a mild-mannered young man under her almost imperceptible thrall.

DF: I agree entirely. Even at this very early stage, there are things about film acting that Davis understands as few others have. The absolute power of her gaze, and when to take her time. The movement of her eyes is so brilliantly destabilizing—we can’t tell what she’s thinking about—that it invigorates Howard’s performance, forcing him to work harder. And when she goes full tilt… well, watch out. Few actors throw caution to the winds like Davis, and the result is always exhilarating. True, she manages only a passable Cockney accent, which also has her trademark clipped delivery. But more importantly. we completely believe her in this role, which is very far from what she would be known for later. Sexiness, for one thing—that’s not what we think of for Davis most of the time, but here she has the fleshy allure of a Jean Harlow.

CK: I confess I’d never seen OHB prior to this outing, and although it certainly leaves a lot to be desired by the contemporary standards of sexual politics—the plot essentially hinges on a proper young man who comes into his own once he’s freed from the claws of a predatory, callous woman—it strikes me as another jewel of early filmmaking. In addition to Davis and Howard, there’s a wonderful performance from Kay Johnson as a stylish socialite who tries to free Howard from Davis’s clutches, and there’s also a lot of refreshingly frank focus on the complicated nuances of carnal relationships (the “human bondage” of the title). I’m sorry I waited so long.

DF: The movie—and, I assume, Somerset Maugham’s original novel—positions Mildred (Davis) against two other women who are both seen to be far more suitable for Philip: the elegant Norah (Johnson), and Sally, a sweet, dewily optimistic ingenue type, played here by the charming and ravishingly lovely Frances Dee. But largely due to Davis’s charisma, the movie itself has the same effect on the viewer that Mildred has on Philip—we know we shouldn’t approve, but nothing really comes to life till she’s part of it. When Davis isn’t on screen in OHB, we’re impatiently waiting for her to show up again.

CK: You don’t have to wait for Davis to show up on screen in Whales of August—she and co-star Lillian Gish are in virtually every scene! Even though I’m a lover of old Hollywood, I’d never seen this iconic pairing either, which casts the two screen legends as a pair of aging sisters sharing a summer cottage on the coast of Maine. And although both certainly hold their own—and despite the fact that “movies featuring legendary older actresses in which very little happens” is practically one of my Netflix Recommends categories—I have to say I found the experience mostly tedious.

DF: I saw it when it first came out, and wanted desperately to love it, but it was—to put it kindly—a struggle. I didn’t expect it to be action-packed, but truly, it’s almost inert. As you remarked to me while we were watching and messaging back and forth, the credits are the most dramatic part of the film. That might be an exaggeration, but they do suggest an almost Yalta Conference level of delicate power negotiation for billing. (As to who won, I’ll only point out that Davis’s personal costume designer gets a full screen listing of her own.) Would that some of this intrigue spilled over into the movie, which has an almost suffocating level of tasteful PBS “high quality” gloss poured all over it.

CK: It’s a shame, because you could easily imagine something more lively springing from this setup, with Davis leaning into her flinty, old-age-isn’t-for sissies personality as the cantankerous Libby and Gish doing sensitive, thoughtful work as the good-natured Sarah. Both are totally watchable and have moments that impress, but I think we’d both agree that Ann Sothern walks off with the movie, supplying the kind of broad comic performance she was known for. (The other star is the location: the sapphire-blue bay constantly glimpsed in the background had me swooning.)

DF: Sothern is completely delightful. Only a year younger than Davis, here she seems brimming with a kind of sparkle that makes her seem like her daughter! But as you say, the moments that work really work. Davis silently, slowly brushing her cheek with a feather had me unexpectedly tearing up. And Gish’s extended monologue about (of course) her husband, lost in the war is superbly done. In both cases, we’re painfully aware of the manipulation, but watching two actors with such an extraordinary, cagey sense of plying their craft makes it rewarding all the same.

CK: The two sisters spend the film arguing about those titular whales—Davis’ Libby claims they were never really there, but they wait for them anyway. In some ways, that sums up the movie itself. What it’s “about” matters less than the experience of spending ninety minutes with two of the greatest stars in the history of Hollywood.

DF: Amen to that. And happily, there’s no shortage of Bette Davis movies to continue our explorations and discoveries. So for next time, how about an absolutely classic performance from 1942—in Now, Voyager. Cue the curtain line: Don’t let’s ask for the moon, when we have the stars.”