By the end, we have rolling heads, a lot of screaming, and cheap horror too often overwhelms the better instincts of the screenwriters. 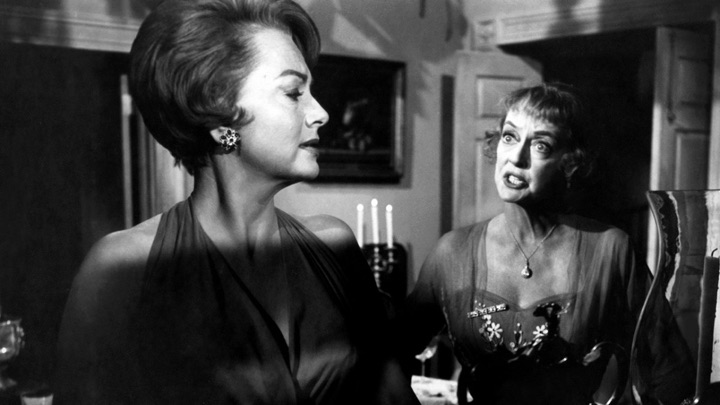 Cameron Kelsall: When we started thinking about a Bette Davis series, David, Hush…Hush, Sweet Charlotte was among the first of her features to make the list. The 1964 Southern Gothic seemed a natural choice especially after the recent passing (at 104!) of co-star Olivia de Havilland, considered by many the last surviving link to Hollywood’s Golden Age. Davis and de Havilland may not be as flashy a pair as Davis and Joan Crawford in Whatever Happened to Baby Jane?—which we’ll take up in this space next week—but the film finds each actress inhabiting a particular sweet spot, often by playing surprisingly against type. In fact, HHSC (as we’ll call it for brevity’s sake) strikes me as far more subtle and interesting than the campy reputation that precedes it. Surely, there are some howlers and histrionic performances, but I often found myself thinking how the film’s depiction of the burden of the female sex ties in nicely to our past discussions of lost Southern womanhood. In another life, Charlotte Hollis and Miriam Deering could be Tennessee Williams characters, no?

David Fox: I made the Tennessee Williams association instantly, when I watched it. I’m embarrassed to admit this, but I don’t think I’d ever seen it through till this week, and now I can understand why. On paper, HHSC should be heaven sent for me, uniquely in my personal sweet spot: marry the key ingredients (well, all but one of them) from Baby Jane to a plot that could be Williams as his most Grand Guignol. And I’d say director Robert Aldrich, his actors and especially cinematographer Joseph Biroc do that with exceptional skill. But to me, this is truly, almost heartbreakingly a whole-less-than-its parts movie. Individual performances and some scenes—especially in the first hour—are mesmerizing. But I think it goes off the rails as it goes along, especially in terms of the screenplay. Somewhere—Wikipedia maybe?—I saw HHSC described as a “psychological thriller.” Well yes… in moments. But also, if only! By the end, we have rolling heads, a lot of screaming, and cheap horror too often overwhelms the better instincts of the screenwriters… who, by the way, are also the same writers as for Baby Jane (Lukas Heller and Henry Farrell).

CK: The film is a full half-hour too long—maybe even 45 minutes—and the longer it continues, the flabbier it gets. It’s at its most taut in the unfolding revelations of the uncomfortable relationship between Charlotte and Miriam, which can also be an allegory for the North and the South, as well as a twist on the “poor relation” plots that often crop up in Southern Gothic novels. Davis is masterful at the hair-trigger shifts between Charlotte’s meekness and her mania, and de Havilland manages to deeply layer what’s outwardly a rather placid performance. There’s simmering tension at every turn, ramped up by supporting performances from Agnes Moorehead, Joseph Cotten, Cecil Kellaway and—in her final screen appearance—Mary Astor. But the intriguing psychological drama runs out of gas long before the film ends, and that’s when we find ourselves in Midnight Movie territory. It’s a shame, because at times, Davis and de Havilland do very fine work—neither received an Oscar nomination, but at their best moments, they could have.

DF: Agreed on all counts. We came to his, really, for Davis, so that’s where I’ll focus first, though ultimately I don’t think she’s the best reason to see HHSC. But, as often is the case with her late-career performances, she throws herself into it with such gusto that she becomes thoroughly convincing, even when the mannerisms—so memorable that they are a core element of many female impersonators’ repertoires—come close to taking over. As you pointed out, the best of HHSC is the earliest part, which is probably also the campiest. Davis is completely irresistible—and absolutely in her element—in those early scenes, decked out in a faded party dress (borrowed from Amanda Wingfield??) and carrying a rifle. As the movie goes on, and Charlotte’s mental state declines, I find that hard as Davis tries, it’s not a great fit. True fragility is one quality I think never feels right for her, and too often, this screenplay calls for it.

CK: I actually disagree. In fact, I think Davis is at her most convincing as she reverts back to her girlish reverie, or in the scene when Kellaway (an interloper from England) appears on her doorstep and treats her with kindness—perhaps for the first time in decades. You can see her face lighten, hear her voice soften and even forget that you’re watching Bette Davis for a moment, such does she disappear into the character. De Havilland, on the other hand—someone I think of as wonderfully soft-hued in many roles, really projects a survivor’s edge. Even in moments of ridiculous excess, she can make Miriam’s choices appear practical.

DF: De Havilland’s death, of course, makes this conversation about a 56-year-old film feel almost topical! She’s a really interesting paradox for me. There are performances that I think are absolutely first-tier film acting (Catherine Sloper in The Heiress, especially) across a pretty wide spectrum. But she always carries the burden of her insufferably beatific Melanie Wilkes. So I especially love her here as Miriam, where she simultaneously evokes that performance… and throws it into the fire. Brava! This was, of course, intended for Joan Crawford, but honestly I doubt JC—whom I love in the right material—would have brought the nuances and colors to it that de Havilland does.

CK: It would have been interesting to see how Davis and Crawford’s antagonistic relationship would have played out after the unpleasant experience of Baby Jane, but it likely also would have been too distracting. In terms of distraction, I have to say that Moorehead’s Oscar-nominated performance as Velma, Charlotte’s devoted servant, sometimes seems a little too self-aware of its own campiness. And although the character is meant to be poor and haggard, Moorhead’s appearance is a touch too hillbilly-ish to be taken seriously.

DF: In the notes I made watching it, I described AM as a walking creme rinse emergency. But I adore her in it—to me, she throws herself into this fairly nothing role and makes it come to life. And really, what an astonishing actress Moorehead was! The range is pretty extraordinary. Watch her in this… and then go back to Citizen Kane, or Magnificent Ambersons, or for that matter, Endora in Bewitched… and try to think of these as the work of one single performer! So for me, Moorehead is one of the high points here… but second to Mary Astor, whose final performance is so utterly riveting that it raises this screenplay from kitsch to absolute grandeur. Watching her in what are essentially two fairly short scenes, I could easily imagine her as Christine Mannon in Mourning Becomes Electra—such was the power and concentration and absolutely class of her work here.

CK: Grandeur is certainly the word I associate with Astor, in general and in this capstone performance, and it’s the kind of cameo role that today would probably grab an Oscar nomination and maybe even a win. Her deep, distinctive voice brings such gravitas to the role, and she manages to project strength and fragility with simultaneous ease. And she was only 58! Of course, “guest star” Victor Buono—who plays Charlotte’s late father in flashback—was only 26 at the time—two years younger than Bruce Dern as Charlotte’s married lover!

DF: Buono is marvelously creepy here in a way that’s quite different from his memorable performance in Baby Jane. When I said earlier that this was a movie for me that works better in individual parts, the actors are almost entirely part of the success story here. Certainly, some of the credit for that belongs to Aldrich, a director who I think consistently does great things with actors. But of course, those actors here are also top-notch. I doubt Joseph Cotten has ever been better than he is here, cast imaginatively against type (nothing else I’ve seen suggest Southern sleazebag), and going to town with it. Even the smallest roles get juicy performances—Ellen Corby as a town gossip, and silver fox Wesley Addy as a sheriff. (The latter is probably better known in the theater as the longtime husband of Celeste Holm.)

CK: Even when it goes off the rails, HHSC is never anything short of entertaining, and there’s always a lot to sink your teeth into. Just watch your back—you never know when a cement urn may come sailing over the veranda and onto your head!

DF: That seems as good a place as any to end. But of course, we’ll be back… and, as you promised earlier, with HHSC‘s even more celebrated predecessor, Whatever Happened to Baby Jane?, recently made famous again through Ryan Murphy‘s Feud.