It’s Easter season, and that can mean only one thing for opera: It’s Cavalleria Rusticana time. And I, for one, couldn’t be more excited. 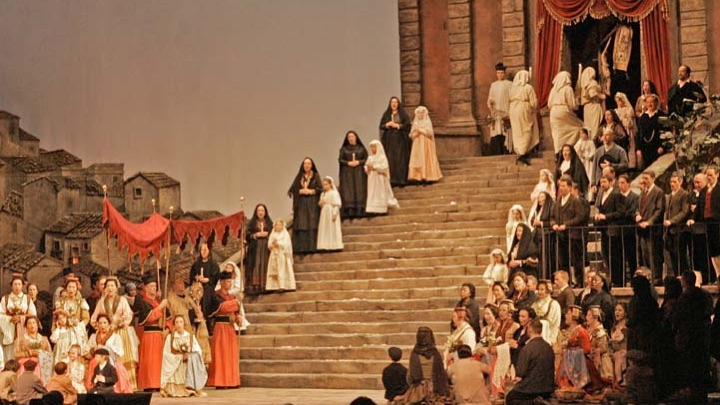 I adore it all – its overt, cheerful, Chianti-colored Catholicism, the fact that, in the world of the piece, just about everything is shouted, and how Mascagni has absolutely zero interest in communicating anything other than Big Emotions through a roiling orchestral and vocal line. It was a great first opera to see because I didn’t realize there were going to be subtitles – with music like this, I didn’t need them.

Hold your nose to its orange-blossom scented elements of class tourism (it’s written in perfect Italian even though it purports to be both the language and music of the groveling and largely illiterate Sicilian peasants it showcases).

Its libretto is inspired by a Giovanni Verga short story, masterful, yet is so stereotypical as to end on the line, “The blood gurgled foaming in his throat, and he could not even utter: ‘Ah, mamma mia!’” and then Mascagni ups the (puts fingers together and shakes hands) Italian factor by ten by peppering in a no-nonsense elderly tavern owner, so much wine, and an entire religious procession.

I love how Giuseppe Giacosa took what was essentially a five-page-long, economically-driven domestic drama between a handful of people and then exploded it into a piazza for everyone to see. What’s more, Giacosa’s 1884 theatrical version of the story, Popular Scenes from Cavalleria Rusticana, actually shows very few of the scenes actually mentioned from Verga. My absolute favorite part about that staging is that the first performance featured Eleonora Duse in her breakout role as Santuzza. It’s an opera where you can taste the love the creative team put into it.

My affection for the piece, both sentimental and critical, knows no bounds. Is there any other opera in the standard rep so unpretentious, so blithely aware yet indifferent to its own parodistic nature? It’s about as ethnographic as a book of hand-tinted postcards that smell distantly of oregano, but seizes opera’s buzzwords like Love! Betrayal! and Seduction! and unspools them with a mercuriality that never fails to always enthrall. It gets through a day’s worth of plot in an hour and its abruptness always works in its favor. The music swells like a mediocre Easter bread in the oven – an insieme of glorious, over-proofed knobs with some colorful nonpareils sprinkled on top.

Its big plot points might jibe with the often-paired Pagliacci, but I find their tones to be dissimilar; Pag is way more recherché. A little more intellectual? We’ll give it that, but I will take an atomic “A te, la mala Pasqua!” over “a stanotte e per sempre tua!” literally any day. I roll my eyes every time “Vesti la giubba} starts. But every time Turiddu starts singing? I lean forward in my seat. And also, like, it’s 2020 – who really wants to watch something about clowns?

You gotta admire how it brings out the best in its performers. I mean, all the way back to the recording with Mascagni himself conducting with a fire-spitting Lina Bruna Rasa, this opera is well-represented on recording. Hell, even the least-likely Santuzza, Jessye Norman, has something magisterially wrathful to say in mp3 format.

That said, the live performances of Cav are consistently better than studio ones – The Callas/DiStefano one has the unideal yet not unusual feeling of Cavalleria-in-a-vacuum (though Tebaldi’s idiosynchratic studio recording with Suor Angelica actually first attuned me to her artistry).

But there are so many great options – you can hardly go wrong, and could certainly do worse than the recently-released Pentatone recording which features performances of eloquent fury from both Melody Moore and Brian Jadge and singing from the Rundfunkchor Leipzig that sounds way more polished than it should.

Santuzza spoke too soon and Easter this year turned out strange indeed. Mascagni highlighted that idea and, instead of eggs and chocolate, gave us hymns and chaos. From the comfort and confinement of our own homes, I can only wish the same for all of you.