Like many artistic homosexuals, I’ve been through an Altman phase, a Cher phase, a Sandy Dennis phase and a Karen Black phase, so you needn’t explain yourself to me. 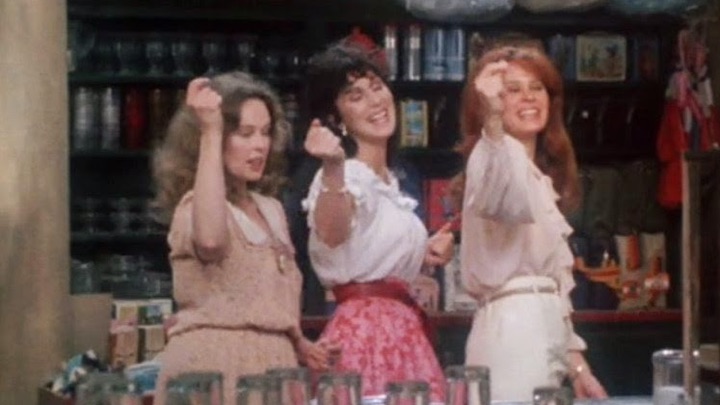 David Fox: Ah, Cameron. We—or at least, I—must now confront the folly of youth. Ed Grayczk‘s Come Back to the Five and Dime, Jimmy Dean, Jimmy Dean (let’s just call it JDJD for ease, shall we?) and even clumsier dialogue (see below) was a youthful obsession of mine. Yes, even then I knew it was kitsch, a sort of amalgam of the worst excesses of Inge and Williams (“He is retarded in the brain!” was a favorite line), along with some even bigger excesses, courtesy of director Robert Altman and what is surely one of the oddest casts of its day: Sandy Dennis, Cher, Karen Black, Kathy Bates, Marta Heflin, and Sudie Bond. There’s so much more to say, but most of all, watching it today forced me to confront my own psychosis. What could I possibly have been thinking in 1982, when I saw it no less than four times within a month or two?

Mona: Luke is just trying to make a laughing stock of him in front of this entire whole town.

Mona: They do too. You know that. They do it all the time, but they just do it to themselves.

Sissy: No, you just think they do. That’s all.

Mona: I don’t think anything! I know they do because they are jealous! Jealous that I was the one chosen to bring the son of James Dean into this world!

Cameron Kelsall: Like many artistic homosexuals, I’ve been through an Altman phase, a Cher phase, a Sandy Dennis phase and a Karen Black phase, so you needn’t explain yourself to me. JDJD was an idée fixe long before I even saw it—largely because, in the late nineties/early aughts, it was practically unfindable. I remember yawping with glee in my college dorm room when someone uploaded the movie (in 10 parts!) during the early days of YouTube. I easily watched it a half-dozen times in short order, mesmerized by its weirdness. So, it’s an obsession I understand. But we can both own up to the cold, hard reality that, once stripped of its camp sensibility, it’s pretty weak and derivative.

DF: Weak and derivative for sure—but the shocker to me is its cruelty, and that’s really on Altman’s doorstep. As far as I know, he had no relationship with the Actors Studio, but the results to me are strikingly like Strasberg’s signature style in the sense of almost fetishizing female suffering as the apotheosis of an acting style. A few years ago, I attempted to watch Nashville again and gave up in the middle. It was too painful, particularly the scene where actress Gwen Welles is jeered while singing and, ultimately, stripping. JDJD has a similarly awful moment for poor Marta Heflin. It’s tough because there’s also no denying that Altman gets some extraordinary performances out of his actors generally, including all the leads here. But the cost is too high.

CK: Heflin, as the resident simpleton, is an easy mark. (It’s no accident, I’m sure, that she’s also somewhat ridiculously costumed.) But Dennis bears the brunt of Altman’s signature predatory camera. Playing a West Texas wingnut who has convinced herself that her developmentally disabled adult child is the son of James Dean, she rants, wheezes and descends into a downright feral state of hysteria. Altman often zooms so close you can practically see inside her nostrils. As with her performance as Irina in Three Sisters (discussed in this space last week), Dennis’s talent and appeal are evident, but she and Altman frequently fall into an unpleasant trap.

DF: Dennis’s mannerisms at least have more context here than they do in Chekhov. She sort of makes sense as a delusional girl/woman who desperately needed a fantasy life to get out of her own head. But it’s still painful to watch. Also odd to think that some of her earliest acclaim came in comedic roles (and I recall thinking she was a hoot in The Out-of-Towners). But Strasberg and Altman certainly pigeonhole her into bathetic extremes. Moving on, I think JDJD was my introduction to Kathy Bates, who is certainly memorable here—though again, it’s pretty unflattering, however brilliant.

CK: It’s also one of the few film appearances for Sudie Bond, a wonderful character actress who died just a year or two after it was made. Although only a few years older than her costars, she’s cast as the matronly Juanita, owner of the five-and-dime and resident holy roller. She can be bitterly funny, as when she quips to waitress Sissy (Cher—more on her later) that her prayer circle has stopped praying for the “poor people in China” because it doesn’t seem to do any good. “Now we just pray for rain,” she says with resignation. Bond takes perhaps the most stereotypical role in the script—a bigoted, unpleasant harpy—and brings some depth and dignity to it. No small feat.

DF: I agree Bond is one of the high points, and I feel less icky about watching her, since a certain brand of, shall-we-say “extreme acting,” was her stock-and-trade. (I believe she created the role of Grandmother in The American Dream when she was only in her early 30s.) Speaking of extreme, we have a quite arresting performance here by Karen Black, cast as (spoiler alert) what might be described as a repentant trans-person. How many degrees of yuck can you find here? Still, she commits to it 100%. I usually hate the term “brave” when applied to acting—but here, I think it’s appropriate.

CK: The play certainly takes a retrograde approach to gender transition, and a cisgender actress like Black wouldn’t be cast in the role today. (That is, if the play could be done at all in 2020 and beyond.) But although she’s not immune to some caterwauling, she’s frequently sympathetic and thoughtful in her choices, and knows when to underplay. So, too, does Cher, an extremely fine actress even then, trapped in the tropey role of an aging good-time girl.

DF: Agreed about Cher. She’s always impressed me most for her ability to play quite ordinary people, since that is so in contrast to her rock star persona. I love her, for example, in Suspect, where she’s a downtrodden public defender. Here, she navigates between ordinariness and glamor—very successfully, I think. She also captures the Texas drawl. Maybe that’s a cue to say more about Graczyk’s script, which of course had a stint on Broadway with this same director and cast before it was made into a film.

CK: Indeed. You mentioned Inge earlier, and the similarities are apparent. Both wrote in a similar milieu, capturing small-town life in that pocket of the country that straddles the South and the Great Plains. (For Inge, it was the border between his home state of Kansas and Oklahoma.) Both have an interest in people who find themselves stunted in lives they never wanted but can’t seem to escape. The difference, for me, is the sympathy that Inge shows his cavalcade of outcasts and losers. The large cast and dusty environs of JDJD call to mind Picnic, for sure, but whereas Inge burrows deep down to the souls of his downtrodden folks, Graczyk puts his on display for ridicule.

DF: Bingo. I have opined before about theater and films set in this milieu that white people living in poverty appear to be the one group who can now be condescended to without apology. JDJD is exactly that kind of toxic piece; also, one overloaded with clichés. Graczyk isn’t exactly subtle–nothing has one metaphor if it can have five or six. The on-going drought in JDJD is a particularly egregious example. I wonder what became of Graczyk?… not that I’m looking for more plays, mind you.

CK: According to Wikipedia, Graczyk lives in Ohio, where he was director of the now-defunct Players Theatre in Columbus for 20 years. (JDJD premiered there in 1976 before moving to New York.) It looks like he wrote a few more plays over the years, none of which came close to equaling JDJD’s success—for lack of a better term. His Wikipedia page includes a telling quote: “There are currently several scripts running around my computer looking for an exit.”

DF: I have a suggestion for where he could put them….