Rosa Feola immediately established with her first group that she’s a serious artist who brought to the concert format both a warmly appealing coppery soprano as well as detailed and savvy dramatic instincts. 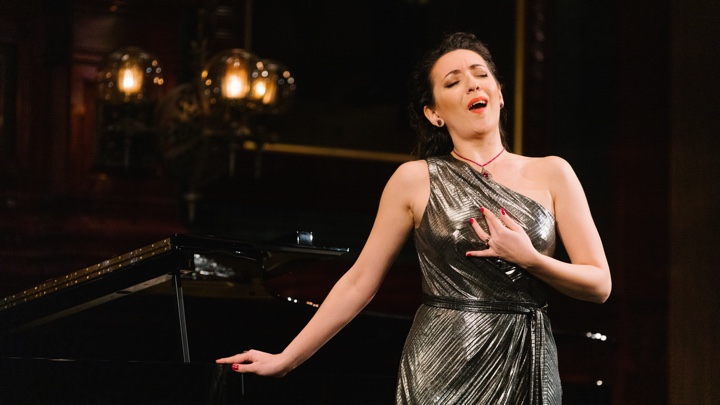 Exactly like last year, 2020 began with a superb recital by one of today’s shining young stars whom we hear too little of in the US. Soprano Rosa Feola and her fine accompanist Iain Burnside brought an unusual and absorbing program to the Park Avenue Armory Monday evening featuring works by Martucci, Respighi, Rossini, Ponchielli and Liszt.

Many vocal recitals can be pretty predictable: either all-German works often by a single composer like Christian Gerhaher’s acclaimed all-Mahler evening last fall or a variation on the conservatory graduation scheme with something baroque then maybe a French group and a contemporary set often in English concluding the program. Songs in Italian rarely figure in—unless they’re by Tosti—so Feola’s provocative choices proved seductively compelling especially when performed with such persuasive specificity and gratifying vocal splendor.

When singers who perform primarily opera give recitals, one never knows quite what to expect, but Feola immediately established with her first group, Martucci’s Tre Pezzi, that she’s a serious artist who brought to the concert format both a warmly appealing coppery soprano as well as detailed and savvy dramatic instincts. She fully inhabited the personae of the Martucci trio—as in the opening “Maggiolata” in which a young girl’s exaltation of spring is hauntingly tempered by troubling fears.

In the Martucci and the Quattro rispetti Toscana by Respighi that followed, Feola moved freely about the raised platform with affecting subtlety; there was no over-emphasis for an audience likely unfamiliar with the texts of the songs. Though an occasional sniffle suggested she might have had a bit of a cold, her full, rich soprano bloomed securely from a healthy vital top to warmly enveloping middle and bottom registers. In the more familiar La regatta veneziana by Rossini, she cunningly delineated Angelina’s many moods as she observed her lover Momolo negotiate the boat race.

After the intermission Feola returned having changed from a sleek silvery dress to a more formal flowing black gown. Her demeanor too was different—during the first half, one could easily imagine this charming artist in the “-ina” type roles that dot her operatic repertoire: Adina, Norina, Lauretta, Nanetta, etc. But for the grander scale of the Liszt Tre Sonetti del Petrarca one saw her soon maturing into more “diva” roles, perhaps Massenet’s Manon or Verdi’s Violetta in a few years. Her beautifully expansive, utterly spellbinding Liszt as well as the ravishing Ponchielli “Sonetto di Dante” that preceded it demonstrated definitively that she is no lightweight soubrette but a deeply expressive artist clearly coming into her considerable own.

I was particularly impressed by her unusually intimate partnership with Burnside. I sat quite close and was able to observe a real collaboration; to reinforce the salon-like atmosphere of the delicious wood-paneled Board of Officers Room at the Armory—so very different from the enormous Drill Hall in which the major productions take place—Feola often would begin a song looking at her pianist half-turned away from the audience as if signaling to us that we should be paying as much attention to him as to her. Several times he met her gaze with a nodded cue—something I don’t recall seeing at other recitals.

Her operatic encore, Liù’s pleading “Signore, ascolta” from Puccini’s Turandot, was unusually slow and resolute ending with a sweetly floating high note that gradually swelled to a stirringly vibrant fortissimo that only increased the sincere and hearty cheers that greeted her through the evening.

After having been abjectly seduced by her Mozart at Lincoln Center two years ago, only physical incapacity prevented me from attending her very well-received Met debut as Gilda last spring. But I wasn’t going to miss her first NYC recital, as surely a season highpoint as Sabine Devieilhe’s last year. After a repeat Wednesday at the Armory, Feola and Burnside will perform the same treasurable program in Washington, DC on Friday.

For those not able to hear them in person, their CD “Musica e Poesia” released several years ago includes all the music from the concert.

I’d not previously attended any of the Armory’s recital series in this uniquely special space. Seating around 100 people, it may be the city’s most unique location to hear a singer. Upcoming this year are the wonderful English tenor Allan Clayton and the always glorious Jamie Barton. November will bring a pair of concerts by Günther Groissböck but those are already sold out.

Feola’s bio promises a return to the Met so this engagement won’t be the last time New York will hear this splendid artist. For those who might not yet know her, here are Ilia’s three arias from a recent Rome Idomeneo conducted by Michele Mariotti as well as Nanetta’s exquisite air from Verdi’s Falstaff at a Chicago Symphony performance led by Riccardo Muti.

You can also hear her in a motet by Vivaldi here.