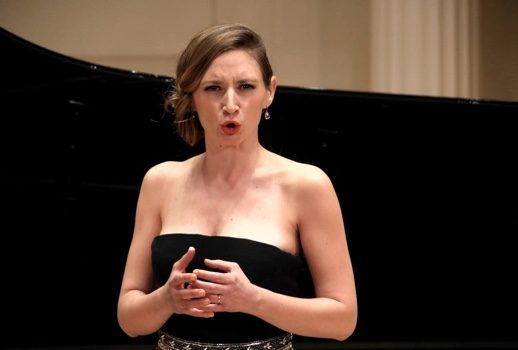 Although she didn’t sing that eponymous song by Reynaldo Hahn during her intimate salon at Weill Recital Hall Thursday evening, Sabine Devieilhe did offer an “exquisite hour” of early 20th century French songs in as near ideal a recital as can be imagined.

Although she’s been a big star in France and throughout Europe for some time now, the lovely French soprano was making only her second appearance in New York after quietly slipping into town in the fall of 2017 for a pair of recitals at the Park Avenue Armory. Already having released an impressive discography on Erato, Devieilhe occasioned eager anticipation for her sold-out Carnegie Hall debut and didn’t disappoint.

For an intermissionless 65 or so minutes she elegantly navigated a challenging program of works by Debussy, Poulenc, Delage, Roussel and Ravel. For a coloratura, she along with her stylish pianist Mathieu Pordoy eschewed music that would have shown off her striking top notes and her élan in florid writing. Instead we got a rather serious collection of wistful, melancholic songs which she inhabited with a subtle command of mood and color.

The voice often exhibited unexpectedly smoky and alluring shades far from the brightly exuberant dazzle of her Zerbinetta for example. Unlike some coloraturas who have big, secure high registers and nothing much below, her soprano was beautifully secure and full from top to bottom with a particularly rich and expressive middle. High soft singing throughout was consistently sublime.

Given my general ambivalence about Debussy, I was perhaps less entranced by her concluding set of his “Ariettes oubliées” although her opening rendition of his “Nuit d’étoiles” notified us that we were in for a special evening. Otherwise I preferred her sparkling Poulenc and astonishing Ravel, a haunting rendition of his “Trois beaux oiseaux du Paradis” was a highlight.

The revelations of the evening however were Delage’s Quatre poèmes hindous, bewitching works which I’d never heard of–much less heard. “Lahore,” the second of the four with its exotic melismatic flights, made me search out her recording (with instrumental accompaniment instead) as soon as I got home. Who might have guessed this dreamy song’s text came from a poem by Heinrich Heine (!) translated by Gérard de Nerval.

Anyone expecting fireworks was disappointed until her first encore: the fiery aria from Ravel’s L’Enfant et les sortilèges.

If some of its coloratura last evening was less than perfectly diamantine, it came at the end of a demanding program which nestled mostly in a very different mode. After such an earnest and satisfying program, her final encore, Poulenc’s slight “Voyage à Paris,” was perhaps the only selection that might have brought to mind Anna Russell’s pithy putdown of French art songs: “magnificent poetry set to rather wispy music!”

Inevitably comparisons with Natalie Dessay, her immediate predecessor as France’s leading coloratura, came to mind but seemed onerous. Their operatic repertoires do extensively intersect: the Queen of the Night (in what must certainly be one of the role’s most loony presentations)…

Zerbinetta, Ophélie, Amina in La Sonnambula, etc., but Devieilhe’s emphatic embrace of and excellence at recitals differs markedly from the older soprano’s early professed indifference to that art form. However, Dessay did change her tune singing songs when her operatic career tanked.

but perhaps she’s not quite the electrically vivid performer that Dessay was.

Although Dessay did venture occasionally into baroque music, she did not make it a cornerstone of her career in the manner Devieilhe has to date. For example, she devoted her first solo CDs to Rameau, and she’ll appear later this year at the Bastille in two roles in Les Indes Galantes which was Dessay’s lone venture into Rameau.

It was hard to judge the size of her voice but surely she could have been the ideal Mélisande the Met and Yannick Nézet-Séguin are currently lacking.

“Trove Thursday” has already featured her twice: in Mozart’s death-defying “Popolo di Tessaglia” and as a real French chambermaid in Die Fledermaus.