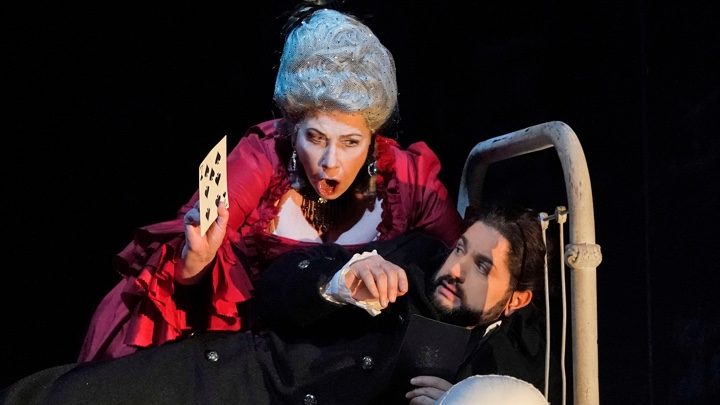 Ordinarily a revival of the Met’s classic Pikovaya Dama would have been among this fall’s most anticipated events except that very dark clouds threatened it. However, a week ago the weather miraculously cleared and its potentially calamitous lead not only vanished but late substitute Yusif Eyvazov dominated Friday’s premiere with a fearless, world-class portrayal that instantly transformed the opera into December’s must-see event.

Since its premiere in 1995 Elijah Moshinsky’s production of Tchaikovsky’s masterpiece of fatal obsessions has been among the Met’s most successful but it’s been eight long years since it was last seen. Anticipation was high, but the pitfall-laden tradition of casting years in advance meant that Latvian tenor Aleksandrs Antonenko was to be Hermann despite last season’s disastrous Radames and aborted Samson.

After a photo of Antonenko in rehearsal surfaced online, many feared the worst. But it was then announced in advance that Eyvazov would take over a portion of the run from Antonenko. Last week though on the eve of Pikovaya’s dress rehearsal, Antonenko withdrew “ill” and his remaining dates would fall to Eyvazov. Disaster was then averted for the opening, and perhaps less expectedly the controversial Azerbaijani tenor triumphed.

Despite its title, the dominant figure in Pikovaya Dama is not the wizened countess who reportedly holds the coveted secret of the three faro cards but Hermann the hapless soldier who will stop at nothing to wrest that information from her.

Hermann is never seen at ease: his scenes always portray him under duress and thus his vocal writing is extremely demanding calling for passionate declamation and ringing high notes. Happily, Eyvazov, whose previous Met appearances have been restricted to works by Puccini, demonstrated these qualities in, ahem,  spades.

Although he achieved some success as Calaf and Cavaradossi, many have bemoaned the tenor’s grainy, often aggressively unappealing timbre in that music That he is also married to opera’s reigning superstar diva, Anna Netrebko, with whom he often appears worldwide, has only added to the opprobrium sometimes aimed at Eyvazov. But his fiercely committed, securely sung Hermann should put doubts to rest about his status as a valuable artist in his own right. 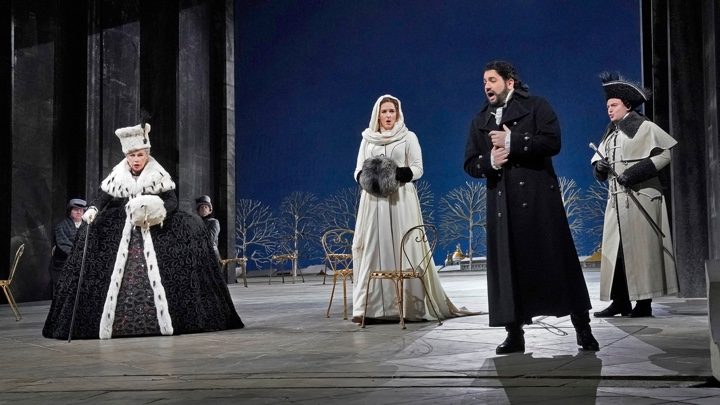 That said, there was little beauty to his singing Friday evening and for much of the first act he could sound stressed. It wasn’t clear how much rehearsal he had had before taking over but by the second act he was more at ease dauntlessly tossing out fiery high notes. While not the most skilled actor, he nevertheless bracingly put across Hermann’s monomania although the nervous pantomime during the opening prelude lacked conviction. All in all, to the relief of thousands, his grand success snatched this revival from an unlucky fate.

Their meltingly beautiful renditions of the Prince’s yearning aria easily turned an audience’s sympathies away from the young girl: who could possibly reject him! But Golovatenko’s fine, sturdy “Ya vas lyublyu” elicited no sighs nor tears as here was an earnest, slightly dull royal whom Lisa was quite right to turn down.

His fellow baritone Alexey Markov repeated his jaunty, amiable Tomsky familiar from the last Met revival. Whereas others have botched the powerful high note at the end of his “three cards” narrative, Markov’s rang out with gusto. His bemused Plutus was an effective feature of the slightly leaden Pastorale. In it, Elena Maximova (who had earlier been a pleasant Pauline) charged at the Mozartian delicacies of Daphnis like an Azucena manqué.

I was astonished to learn that the bold Russian mezzo frequently performs Rossini roles at the Vienna Staatsoper including Angelina in La Cenerentola just this year! As Chloë, whom the baritone and (trousered) mezzo crave, Mané Galoyan, another debutant, revealed a pleasing light soprano.

Rather than seek out an aging monstre sacrée soprano to portray the Countess, the Met turned to veteran Larissa Diadkova who brought a well-worn but still vibrantly potent mezzo to the role. Though sometimes able to dominate with her commanding presence and abetted by spectacular prima donna costumes which slightly dwarfed her, Diadkova in the final act made less of an impression than her predecessors had. 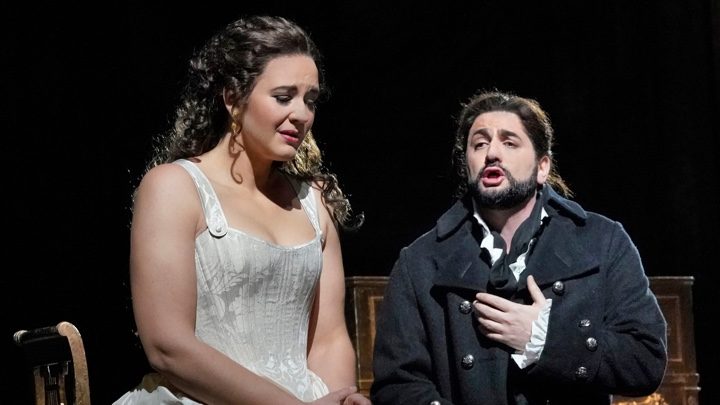 Her shocking ghostly appearance in the army barracks was frisson-free and her return to observe Hermann’s failure at the gaming table went by nearly unnoticed. However, she made much of the nostalgic Grétry aria and her arrestingly palpable fear during Hermann’s mad interrogation brought chills.

And what of the much-ballyhooed Met debut of young Norwegian Lise Davidsen as the unfortunate Lisa? It’s hard to recall a recent instance where an artist’s first Met appearance has been accompanied by so much breathless anticipation, fueled no doubt by a now-rare solo recording contract and press-ready statements like Sir Antonio Pappano’s rapturous claim that she is a “one in a million” singer. Expectations were extraordinarily high Friday night as it was likely very few in the packed house had heard her live before.

Davidsen’s debut was surely a real success, yet Lisa was a surprising introduction to New York as the role is relatively small. Her participation in the first scene was limited to a big ensemble which revealed little but her subsequent lovely contribution to the duet with Pauline augured well.

However, the agitated arioso in which she revealed her conflicting emotions about Yeletsky and Hermann was beset by some explosively loud climaxes, so aggressive I wanted to reach for the volume control. The tense interaction that followed with Hermann who has impetuously stolen into her bedroom suggested that she’s a competent if not inspired actress but then both she and Eyvazov conscientiously went about their 24-year-old blocking rather than fully embodying their tense encounter.

There’s not much for Lisa to do in the second act beyond her horrified discovery of Hermann’s involvement in the Countess’s demise so Davidsen’s final scene by the banks of the Neva proved especially telling. She shaped her aria and its subsequent cabaletta-like conclusion with achingly anguished detail, delicately fining down her enormous voice to convey the girl’s growing fatalism. 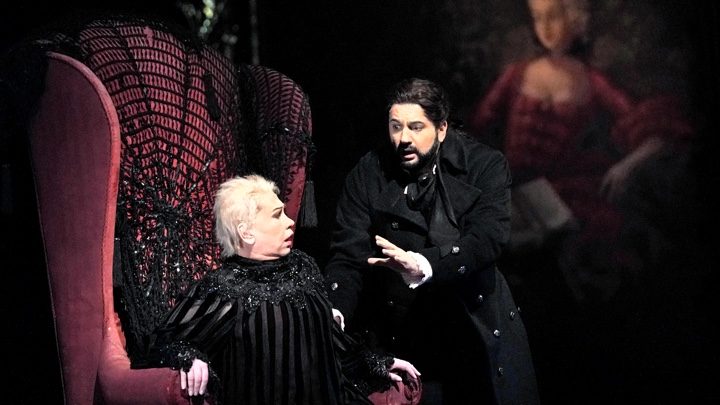 If her trudging to her suicide fell flat, blame its inept staging and the awkward set. Plus, Davidsen’s sturdy Lisa seemed far too sensible to kill herself over a bad boyfriend!

On first hearing, Davidsen’s voice struck me as generous and secure if not particularly distinctive. It fills the house effortlessly and the top blazes thrillingly. A friend ventured an apt if surprising comparison to early Sondra Radvanovsky. Lisa seemed to showcase only small aspects of her outstanding promise and it’s most definitely the sort of voice one should hear live as her CD and broadcasts have only provided clues to its breadth.

Friday’s debut left little doubt that Davidsen is a rare and special talent that should be nurtured carefully. Of the laundry list of future Met roles planned for Davidsen, Eva and the Marschallin may at this point seem curious, but the prospect of a long-awaited Fidelio revival promises to be amazing.

Not to be overshadowed by the onstage achievements, conductor Vasily Petrenko made his Met debut leading a finely paced, intensely dramatic Pikovaya Dama. His weakest showing was in the Pastorale which lacked lightness and sparkle, its Mozartean echoes rather heavily dispatched.

Otherwise he and his estimable orchestra collaborated well in a darkly convincing reading that should only improve as the run continues. The usually impeccable chorus sounded surprisingly raucous during the second-act ball but the men found their sure footing in the rip-roaring gambling scene.

Five more performances with Davidsen and Eyvazov remain with the Saturday broadcast scheduled for 14 December. Samples of Davidsen singing works by Wagner, Mahler and Sibelius can be found here.

It stars Anton Wolbrook as Hermann and in her first major screen role the divine Dame Edith Evans as the Countess. Dickinson is perhaps best known for his earlier film Gaslight which also stars Walbrook and which preceded by several years the more celebrated Hollywood version by George Cukor with Ingrid Bergman and Charles Boyer.

Rumors suggest the Met may be planning to revive its production of Prokofiev’s The Gambler and it now surely has its ideal Alexei in Eyvazov. (In a remarkable coincidence Dame Edith also appeared in a film version of the Dostoyevsky gambling story as Babulenka in BBC-TV’s The Gambler which was shown during the first season of Masterpiece Theatre on PBS.)