Like Julius Caesar before her, Anna Netrebko can rightly proclaim “Veni vidi vici” about her decisive Roman victory at the Metropolitan Opera where she took on her first-ever Tosca. 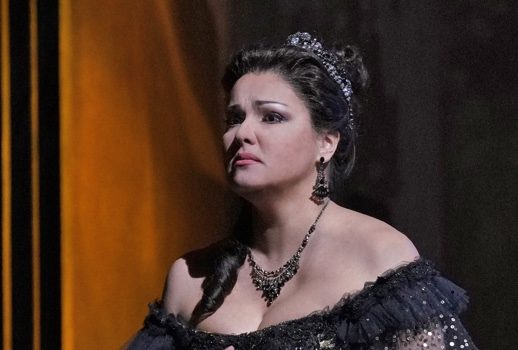 Like Julius Caesar before her, Anna Netrebko can rightly proclaim “Veni vidi vici” about her decisive Roman victory at the Metropolitan Opera where she took on her first-ever Tosca.

Feminine and vulnerable yet mercurial and implacable, Netrebko’s Floria Saturday night was already an astonishingly complete realization of a quintessential diva role she initially swore she would never do and since has suggested she doesn’t particularly like. I don’t much care for Tosca either, but Netrebko’s been absent from the Met for a year so I along with an eager, jam-packed house welcomed her back with open arms and hearty bravas.

Her husband Yusif Eyvasov was greeted a bit more equivocally in only his third appearance in the house following a pair of Calafs in 2015. A rustle of boos after his “E lucevan le stelle” grew determinedly more lusty at his final bow although I’m not sure how much they registered in the rest of the house as the coven of perpetrators were right behind me.

Despite his best efforts, he came across blankly despite keenly going through the motions. His Mario registered neither as a hot-blooded activist or a passionate lover. His unchanging visage contrasted blandly to his soprano’s whose face revealed the myriad emotions that plagued her really rough Tuesday 17 June 1800.

Though I preferred him to the usually punchy and distracted Marcelo Alvarez whom he replaced or the preening showboat Vittorio Grigolo who created the role at the premiere of Sir David McVicar’s new production on New Year’s Eve, Eyvasov’s raw sometimes braying tenor brought little balm to the ear.

The top rings out with a brazen, buzzing edge, but the middle often becomes occluded like he has a mouthful of cotton. Yet he does try to shade his lines with some sensitivity and nuance; with the complicity of conductor Bertrand de Billy, both of his arias were taken very slowly and made their mark but he can’t really caress the delicate “O dolci mani” like many past Cavaradossis.

His vacant painter was thrown into even greater relief by Michael Volle’s powerfully dominating Scarpia. The German baritone got off on the wrong foot (with me at least) with his strained Met debut as Mandryka but he redeemed himself last season with a wonderfully vigorous yete haunted Dutchman. His tall robust frame combined with a brusque authoritative mien allowed him to make a much stronger impression at Scarpia’s striking first entrance than had the congenitally less engaged Zeljko Lucic in December. 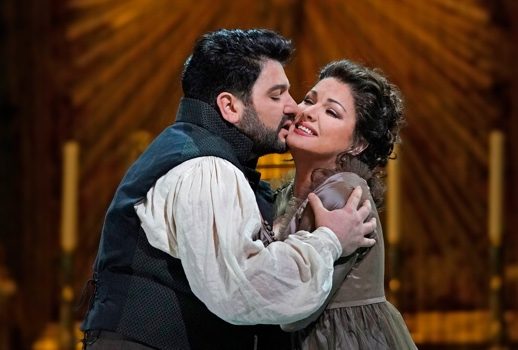 His “iron fist in the velvet glove” approach initially emphasized the Baron’s suave and cunning side but soon one saw that he was really just a brute who reveled in torturing Tosca while his retinue of hunky henchmen (thank you as always, Sir David) led by the hot-ginger Sciarrone of Christopher Job carried out their duties on the yelping Mario.

It then came as somewhat of a shock when Volle let down his guard and got carried away rhapsodizing about this “love” for Tosca, a sequence that concluded with his hands grasped around her neck in a repulsive “embrace.”

Although one might here and there have wanted a bit more snarl from Volle and a little more thunder-power to dominate the “Te Deum,” he otherwise sang with color and imagination and an intense involvement in the nasty proceedings. What a stimulating respite from the now-tired round-robin of Lucic and George Gagnidze who seem to have sung every Scarpia (and Rigoletto) at the Met for the past decade.

De Billy’s conducting wasn’t the last work in plush authority and dramatic tension particularly in the churning emotions of the second act where the orchestra sounded disconcertingly mild. His supportive, idiomatic touch tough was far more impressive than Emmanuel Vuillaume’s hectic reading had been at the premiere during which John Macfarlane’s lush detailed sets got enthusiastic audience approval at the beginning of each act.

On Saturday, only Scarpia’s study (and Netrebko’s first entrance) prompted a round of applause but it’s still puzzling why each set is tilted on a 15-degree angle.

This first revival suggested that McVicar’s absolutely conventional, utterly predictable production will serve the Met well enough for the likely parade of sopranos, tenors and baritones who will populate it over the next decade or two. The first act remains an over-populated muddle, however, with the mime of elaborately garbed church visitors absurdly distracting from the first crucial Scarpia-Tosca encounter. The splendid sacred procession still proceeded so far to the left that surely a quarter of the audience missed some or all of it. 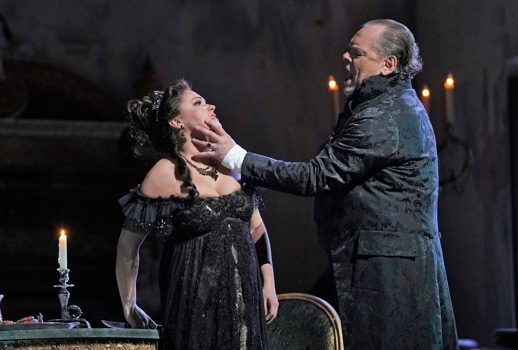 Tosca’s usually surefire entrance too emerged awkwardly from that side but inevitably all eyes were then on Netrebko despite McVicar’s lame staging. Clad in a striking new mauve gown (Sonya Yoncheva had worn all white), her Tosca initially covered her hair with her aqua shawl winning points from many as Yoncheva had received outraged Tosca-demerits for entering with her head uncovered.

For the first half of the act Netrebko played at jealousy, teasing rather than being truly upset about the Attavanti resemblance and the painting’s light eyes. Whereas Yoncheva and Grigolo evinced newfound puppy-love, Netrebko and Eyvasov’s comfortable yet volatile relationship suggested a comfortable but still passionate alliance of some duration. The true depth of her feelings for Mario were only revealed when Scarpia began twisting knife with the revelation of the Attavanti fan.

If Netrebko in the second act—who, by the way, looked extraordinarily beautiful in glittering black— was only impressive rather than revelatory, it may be because McVicar so slavishly adheres to Giacosa/Illica’s libretto and Puccini’s programmatic score. She obediently spotted the knife and then the safe-conduct precisely when the music indicated, so too the old candle-and-crucifix routine.

Her two-part stabbing of Scarpia had splendid oomph and fire; her immediate regret proved equally convincing. But it was by and large a Tosca like so many others.

But for me the third act, perhaps not always the most interesting for Tosca-watchers, contained Netrebko’s most fascinating personal touches. As she’s about to send her sheepish Mario to his execution-charade, she grabbed him by the shoulders and stared at him with an intense gaze that said, “Look, g-ddammit, you have to do this right! Pull yourself together and do as I say!” That look, that moment spoke volumes about who had called the shots in their relationship.

But the most disturbing, breathtaking touch came when Tosca mutters to Mario to do as he has been told as the squad fires. Netrebko sang these lines with a doleful fatalism that belied her outward confidence; the usually triumphant “Ecco un artista!” never sounded so shockingly pessimistic. Despite her outward confidence, she had known all along it was a sham.

She then roused herself to exalt in a triumphant “O Scarpia, avani a Dio!” from near center-stage and then raced to the platform edge for a much more arresting jump than Yoncheva’s limp dead-drop.

She began in rather heavy, gluey voice but it gradually came into focus by the end of the duet with Mario but she really didn’t find her best form until the second act where the top was in much better working order. The middle and bottom of the voice have grown increasingly big and dark and there’s now an even bigger contrast with her bright full high notes.

Her modest “Vissi d’arte” glowed (had she ever sung it in public before this performance?) yet she seemed intent on not making it into a showpiece unlike, for example, Angela Gheorghiu who pulled out all the stops and was thereby awarded an even longer ovation than Netrebko received last night.

Though she momentarily sounded out of sorts at her third-act entrance, we at last got some finely shaded piano singing in the duet with Mario. Given that she had less than two weeks of rehearsal at the Met, it was all in all a highly successful debut, an extremely detailed and finished interpretation. I wonder how many would have guessed it was her first attempt if that hadn’t been 2018’s most publicized bit of opera news.

Although Tosca never involves me nor moves me in the way that La Bohème or Madama Butterfly can, I do acknowledge why so many people swoon over its outpouring of melody and swift blood-and-guts drama. And while it’s always fun to “collect” new Toscas and Cavaradossis, I’ve OD’d on this “shabby little shocker” and may not need to hear it again for at least a few years.

I still wonder about Netrebko’s reversal; perhaps she may be increasingly conscious of creating a legacy. It strikes me that perhaps she has finally taken on Tosca because she thinks she ought to, much like she did with Tatyana in Eugene Onegin, a role she has finally grown to love based on her splendid performance last season at the Met.

Aïda too is an expected Verdi opera that she has only just recently performed but it may be closer to her heart than Tosca, as I don’t see any further performances of the Puccini on her immediate schedule since she has dropped out of a pair originally scheduled for next summer in Munich.

Yes, I’m glad to have seen Netrebko as Tosca and anyone who can get into the next three should before Volle leaves the cast. But more than once I found myself wishing it was instead her first Leonora in La Forza del Destino or Lisa in Pikovaya Dama or Jenufa or Rusalka or even, God help me, La Gioconda.