The opening night of the Canadian Opera Company's 2019-20 season was all about the Wilsons. 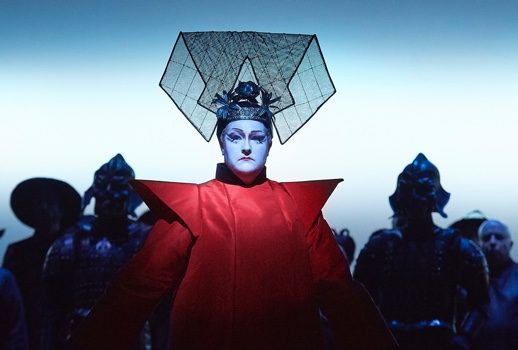 I’ve long been familiar with Robert Wilson’s iconoclastic style but this was my first experience watching a complete production in person. His methods have always been controversial and distinctive. Singers show little emotion and do not make eye contact. Movements are slow and deliberate. Lighting is supreme. The stage tableaus are breathtaking.

It goes without saying that when Liu cries that her master has fallen, Timur doesn’t actually fall. When Calaf has his emotional reunion with his father and says that he wants to kiss his hands, he decidedly does not. Right at the outset, Wilson frees the drama from veristic concerns. It’s a distinctive approach to be sure and not one I would want to see all the time, or at all in certain pieces (I can’t imagine this approach working in Tosca, for example). But Wilson is an assured master and makes a strong case for his vision with his unique stage vocabulary.

The stage is free of sets (with the brief exception of the opening of the third act) and is only animated by the players and lighting. The colour scheme evokes fire and ice, with deep reds and vivid blues. I was expecting a reliance on platforms to give the stage pictures dimension but Wilson keeps everyone “grounded”. This makes Turandot’s first appearance even more striking. A platform juts out from stage left high above the crowd, displaying the titular princess in stunning shades of red and black.

Knowing Wilson’s style, I was wondering how he would deal with the frenetic choral passages of the first act – they do not lend themselves to stillness. Wilson approach is to have the singers move in simple, repetitive patterns. They move side to side, and at other times, they alternate back and forth movements. The latter becomes a bit tiresome after a while. But the side to side movements have a funky attitude that enhances Puccini’s colourful music.

In this production, the Executioner does not appear when he’s referenced in the libretto. In those moments in the first and third acts, his associates appear instead. Wilson saves the Executioner for a single appearance at the end of the first act. On the concluding measures, he suddenly appears on the same platform that had borne Turandot earlier, holding his knife and a red robe, and hurling a horrible, chilling laugh at the audience. 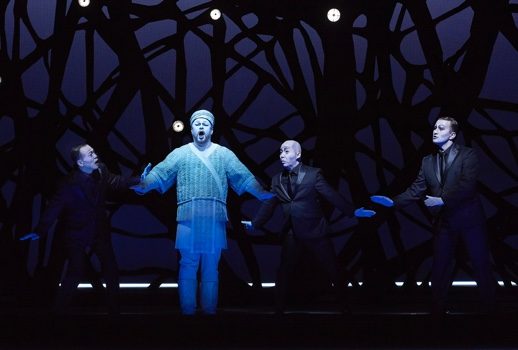 Wilson’s most striking directorial choice is his approach to the trio of Ping, Pang, and Pong. They are the only characters in modern dress. And there’s a deliberate choice to have the English surtitles refer to them as Jim, Bob, and Bill. In his program notes, Wilson notes the characters’ commedia dell’arte roots and his aim to utilise them as such by having them nod and wink at the audience. During the Riddle Scene, the three ministers sarcastically mouth the words of the other characters. They nod off during the riddles. They’ve seen this show too many times.

Their first appearance is jarring. They prance and hop like silly children (I admired the singers’ cardiovascular endurance) and they bob their heads comically. The racial stereotypes are undeniable; the approach confronts the work’s offensive orientalism head on. Adrian Timpau, Julius Ahn, and Joseph Hu take on their assignment with great aplomb, with Timpau offering beautiful vocalism.

When Liu kills herself, she doesn’t fall dead but simply strikes a sleeping pose. After Timur’s heartbreaking final lines, the two of them gently waft through the crowd before disappearing. It’s a dreamy image that exemplifies Wilson’s ability to create a moving moment despite his distancing, Brechtian language.

In the final scene, Wilson puts the focus squarely on Turandot. Calaf fades into the background and into darkness. A white laser beam descends upon Turandot who stands in the spotlight. A princess is reborn.

Tamara Wilson has sung a number of roles at the COC over the last decade and has gone from strength to strength. I was particularly taken with her recent Desdemona and was anticipating her icy princess. But I was still unprepared for what she delivered. Hers is a glorious Turandot and is simply the most beautifully sung account of the role I’ve heard since the recordings of Nilsson and Sutherland.

The voice is freely and evenly produced and the tone is radiant. The singing is always rooted in legato. The chest voice is present but not forced. The glowing high notes have metal at their core with the high Cs blazing above the orchestra and chorus. She embraces the statuesque stillness of the direction and holds the stage commandingly.

Singing his first Calaf, tenor Sergey Skorokhodov has an attractive tone, smooth legato, and ringing high notes. He sings ardently and gamely takes on the physical gestures required of him. Soprano Joyce El-Khoury is particularly fluid with gestures and movements. Even with distancing effects of Wilson’s stage language, she offers a moving Liu. She phrases with sensitivity and is generous with creamy high pianissimi.

As Timur, David Leigh looks not entirely comfortable with the staging and lacks physical gravitas. His rich, booming bass voice, however, is not lacking in the requisite gravitas.

A familiar presence at the COC, conductor Carlo Rizzi leads the score masterfully. I was particularly impressed by his work in the first act. He lets the lushness of the music speak for itself and instead focuses on its stark, percussive elements, bringing out the violence of score. The orchestral writing in the first act can get very thick in the wrong hands, overwhelming the singers. Rizzi shapes transparent textures that allow the singers to be heard clearly without sacrificing the power of the orchestration. The COC Orchestra responds splendidly with a searing, urgent performance.

The COC Chorus is in typically great form and embraces the direction convincingly. I will not soon forget their blood-curdling cry at the end of the “Gira la cote!” chorus in the first act. That moment is one of many that have left indelible musical and theatrical impressions.