The evil that men do

The Canadian Opera Company’s new production of Otello is a collection of welcome returns. 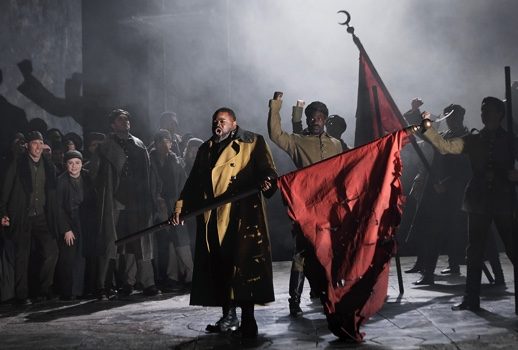 The Canadian Opera Company’s new production of Otello is a collection of welcome returns: the return of Verdi’s penultimate masterpiece after nine years, the return of principals Russell Thomas, Tamara Wilson and Gerald Finley, and the return of director David Alden.

As with any Alden production, there are elements that leave me scratching my head: a bit of puzzling choreography here, a superfluous non-singing character there. But those are quibbles; this is one of the most riveting productions I’ve seen on the COC stage in several seasons.

Alden doesn’t leave a moment wasted. The Personenregie is detailed, the chorus moves with intent, and key dramatic moments are highlighted with urgency and skill – the tricky third act concertato is as clearly directed as I’ve seen. And the veteran director brings out the best acting in his cast.

The production is set (“ambiguously” as per the director’s notes) around the time of the opera’s composition. Jon Morrell’s sets and costumes are gray and gritty, creating an unwelcoming atmosphere. Adam Silverman’s lighting evokes German Expressionism. This is a brutal, unhappy world. Desdemona is notably its sole point of optimism.

The production puts Jago at its very centre. The lighting highlights Jago from the opening storm sequence as he stands silhouetted in an archway. He survives the opera’s heart-wrenching conclusion, ominously glancing towards the audience on the final chords – evil lives on. This change to the libretto comes across naturally, rather than in an interventionist way. Otello moves to kill Jago but drops his sword, his despair clearly focused on his deceased wife. 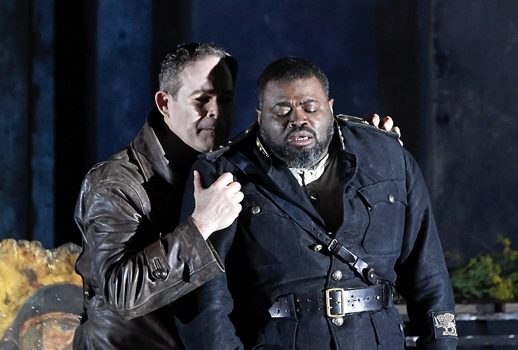 Always a fine actor, Finley outdoes himself as he explores the most disturbing depths of his villain. With pale skin and red eyes, he is presented as a ghostly, almost undead figure – a visual personification of his Credo. Vocally, he sounds at least a decade younger than his 59 years.

His voice may lack bite, but its dark colors convey the character’s malevolence. And while he lacks the vocal amplitude of typical Jagos, he is never inaudible. Musically, his singing is impeccable, and his attention to text sets the pace amongst a text-diligent cast. I won’t soon forget his haunting portrayal.

As the titular character, Thomas is on the lighter-voiced side of this role’s interpreters, but he, too, is never inaudible. Yes, certain climaxes in the second and third acts are underpowered. But I’ve heard a number of Otellos power impressively through those moments and come up short musically elsewhere. Thomas sings gracefully and never pushes his voice. He also delivers his most impressive acting to date on the COC stage. This is a deeply moving portrayal.

Equally affecting is Wilson’s Desdemona, who gives a heartbreaking performance. She deploys her voice – an alluring combination of sunshine and steel – with a range of dynamics and stylish phrasing. She can pour out a flood of sound when she needs it but is more interested in nuance. 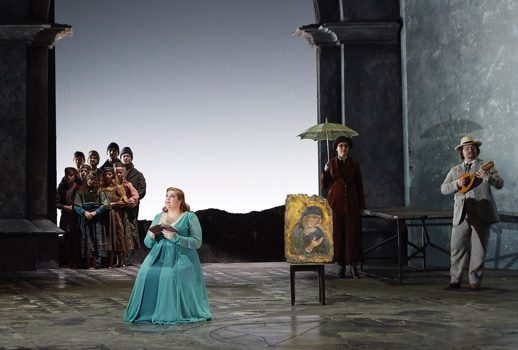 She saves her most passionate outpouring for Desdemona’s confusion in the third act colloquy with her husband. I look forward to her Aida next season (happily paired again with Thomas as Radames).

Mezzo-soprano Carolyn Sproule’s Emilia is a timid, bookish figure – terrified of her husband but also sexually drawn to him. She sings her lines with warm tone and unaffected delivery.

Andrew Haji (a previous Nemorino for the COC) possesses the very definition of a “honeyed tenor”. I’ve yet to him utter an unbeautiful sound and he sings Cassio’s line sweetly and acts sincerely.

Tenor Owen McCausland’s convincingly conveys the production’s conception of Roderigo as a dandy. And bass Onay Kose is an authoritative Lodovico.

Music Director Johannes Debus leads a muscular, propulsive performance, revelling in the score’s accents and highlighting its rich, colourful details. The COC Orchestra responds in kind. The COC Chorus acts as well as any opera chorus and sings with rich, penetrating sound.

Otello is the very first live opera I saw as a teenager. I’ve seen it on stage and on video numerous times in the intervening 29 years, but I haven’t been so captivated by it in many years. Bravo!