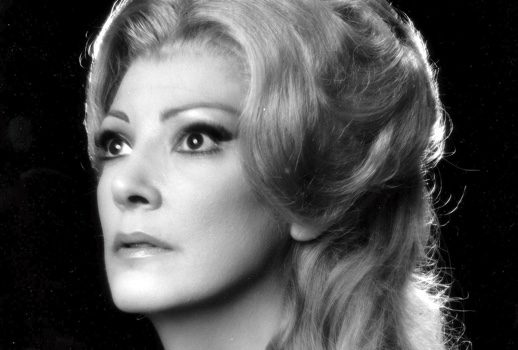 By sheer coincidence Bellini’s Amina bears some resemblances to Rossini’s Ninetta who appears tonight in Rossini’s La Gazza Ladra at the Rose Theater. Both virtuous bel canto heroines find themselves in a pickle through no fault of their own. True enough, Bellini’s doesn’t face capital punishment but a virgin caught carousing with a visiting nobleman would have had to deal with consequences nearly as dire.

Thinking back to the Peter Sellars Tannhäuser that I posted about on Christian’s thread the other day, I remembered I saw my first Sonnambula that same season (1988) on Lyric Opera of Chicago’s opening night. Elvino was Frank Lopardo and Cecilia Gasdia Amina. Like Moffo and Netrebko she was not a “fireworks” coloratura soprano type in the role. Her sleepwalker was however wonderfully intelligent and intensely affecting and I’m sorry I never got the opportunity to hear Gasdia again.

And speaking of Tannhäuser, Moffo’s mom Teresa is sung by Janis Martin who would eventually evolve into a notable Wagnerian whose repertoire included Venus.

The earlier of today’s performances of Sonnambula was Moffo’s San Francisco Opera debut and she appeared there in just four roles over two seasons. This brief association was not dissimilar to her relationship with Lyric Opera of Chicago where she made her US debut in 1957 yet also stayed just two consecutive seasons. By comparison, Moffo sang 18 roles in over 200 performances at the Met across 17 years, including 80 (!) as Violetta.

Amina, a role in which she first appeared in a lip-synced Italian television version of Sonnambula in 1956 was, I believe, her only Bellini portrayal while she took on at least three Donizetti operas at the Met: Lucia di Lammermoor, L’Elisir d’Amore and just a single performance of Don Pasquale.

Moffo’s paramour here, Nicola Monti may be most notable as the Elvino opposite the more celebrated Amina of Maria Callas during her 1957 performances of which recordings from Köln and Edinburgh survive.

According to what appears to be a reliable Netrebko database–up to 2012 that is, the Russian soprano sang just a single Sonnambula at the Mariinsky in 1999—opposite Evgeny Nikitin as Rodolfo!

Today’s “pirate” is a document of Netrebko’s first Vienna Amina at the beginning of a run of four performances—after which she never did the role again. The Vienna Sonnambulas directly preceded her controversial Met Elvira in I Puritani, another role she quickly renounced. In neither of these Bellini roles did she seem to repeat the success she had as Giulietta in the composer’s I Capuleti e i Montecchi .And of course her Norma, though announced, was never to be.

Both versions of Sonnambulacan be downloaded by clicking on the icon of a square with an arrow pointing downward on the audio player above and the resulting mp3 files will appear in your download directory.

More than 250 other podcast tracks are always available from iTunes for free, or via any RSS reader.

The archive which lists all “Trove Thursday” offerings in alphabetical order by composer has been updated this month.