It’s the Minnesinger not the song

Tannhäuser pales beside the other great Wagnerian operas in the degree to which it has innovated the Regisseur’s vocabulary for set design and dramaturgy. 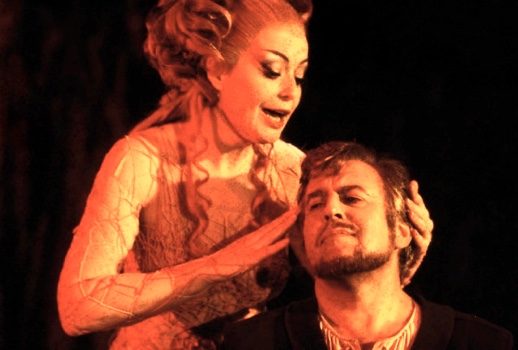 Until Tobias Kratzer’s new production of Tannhäuser opens this summer, the second of Wagner’s canonical dramas had been directed only six times since the Bayreuth Festival’s reinauguration in 1951. As a centerpiece of Wagner’s theatrically inclined institution, this makes Tannhäuser lag behind the Ring (seen in 11 different incarnations since Wieland’s revolutionary Neo-Bayreuth production), Lohengrin (eight productions, the most recent of which was spearheaded by Yuval Sharon last summer), and all the other operas (each having been directed seven times) in directorial novelty.

Tannhäuser also pales beside the other great Wagnerian operas in the degree to which it has innovated the Regisseur’s vocabulary for set design and dramaturgy. Multiple incarnations of the Ring (Wieland, Chereau, Kupfer, and Castorf each have left an indelible imprint on the art of conceptualizing the tetralogy), Tristan und Isolde (Wieland, Everding and Ponnelle), Parsifa l(Wieland, Herheim), Meistersinger (Wieland and Kosky) and even Lohengrin (Neuenfels) each expanded the boundaries of theatrical aesthetics. So revelatory were some of these directors’ ideas that their productions’ influences can at times still be clearly perceived in the art of staging opera as theater today.

By comparison, the festival’s most memorable productions of Tannhäuser (Wieland’s second 1961 and Götz Friedrich’s 1972 staging), however fine they may be, appear to me as extensions of existing evolutionary ideas in the theater of the time as opposed to representing an intriguing discovery for the laboratory of operatic production. 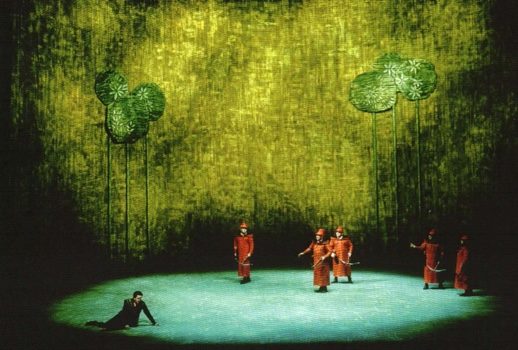 Perhaps Wieland’s casting of less conventionally Teutonic artists like Grace Bumbry or Victoria de los Angeles(in the early 1960s, he had courted conventionally Italianate singers like Mario del Monaco and Maria Callas to essay parts in operas like Lohengrin) imparted his second production with a lyricism and Mediterranean warmth that contrasted strongly with the festival’s casting traditions.

However, despite the excellent musical interpretation given by Sawallisch and his cast  (Silja and de los Angeles were Elisabeths who combined incisive acting with youthfulness (in the case of Silja), or purity (VdlA) of timbre, Windgassen a harrowing and vocally impressive hero, Bumbry a sensual Venus), I ultimately never got the impression that this production represented an artistic cut above what Wieland had already charted in his earlier work.

Ultimately, Wieland’s readings of Tannhäuser felt like a well-executed extension of the ideas (e.g. the stylized movements, the swapping of abstractions and symbols for realistic locales) that he had already applied to his previous productions like the 1951 Parsifal, the 1956 Meistersinger, and the late 1950s Lohengrin.

Götz Friedrich’s production from 1972, which pitted Tannhäuser the individual against two societies that neither provided him release nor fulfillment, moved me for the director’s incredibly thoughtful Personenregie.

The crux of Friedrich’s concept centered the drama on the relationship between Tannhäuser and the Elisabeth/Venus vs. Wartburg/Venusberg dichotomy, personified with the greatest dramatic immediacy by Gwyneth Jones (in particular, the third act, where her brilliant depiction of Tannhäuser’s objects of desire clearly conveyed the thesis that both women, long viewed as opposing facets of the opera’s treatise on love, are really different sides of the same coin.)

Friedrich also smartly conceived a stage design and dramaturgy that communicated the equal if not equivalent spiritual desolation and emptiness pervading both Venusberg and Wartburg.

But the optics of Friedrich’s production, though intelligent and effective in connecting the director’s ideas with the score, ultimately feels dated. There are Bayreuth productions of a certain vintage—such as the Kupfer and Chereau Rings and the Ponnelle Tristan—that continue to wear their dramaturgical strokes and stage aesthetics well despite their age.

Chereau’s Ringremains a fundamental cornerstone of the Regisseur’s craft, and the humanization of Wagner’s myth and the spatial and temporal relocation to some timeless feeling industrial age continue to inform new productions of opera even today. Friedrich’s Tannhäuser, on the other hand, feels like just another dark and abstract template peppered with a few cultural and political symbols to communicate some form of stage psychology (e.g. the cold, institutional feel of Wartburg).

His staging of the work certainly feels like Tannhäuser, but much of its success largely rode on the dramatic acumen of his excellent singers. Much like Wieland’s own staging, Friedrich’s Tannhäuser to me represents just another extremely well crafted stage product of his time.

This brings me to a subject of discussion I’d like to have for this post: is Tannhäuser’s short list of theatrical successes fundamentally entwined with its problems as an opera? Although Tannhäuser is popular enough (according to Operabase, it is the third most performed Wagner opera after Holländer and Tristan und Isolde between 2008-2018), I feel as if productions and recordings of the work don’t boast the same degree of prestige accorded to the more mature, through composed Wagnerian dramas that followed it.

I’d already mentioned the opera’s performance history in Bayreuth (outside the festival, maybe Lehnhoff and Carsen are really the only directors whose filmed productions offer something that approaches Friedrich’s standard). Despite containing some of Wagner’s most beautiful solos, the work rarely gets plum casting or productions of the most stellar artistic quality.

Additionally, great recordings of Tannhäuser, unlike let’s say the Ring, Tristan, Meistersinger, Lohengrin or Parsifal, number but a handful in a very uncrowded field (Solti spearheads the competition with the Paris edition, whereas the ones by Janowski and Haitink represent the Dresden edition best; among Bayreuth’s Tannhäuser broadcasts, the recording minted by Philips with Sawallisch conducting is superb).

Contrast that with the dozens of incredible recordings and wonderful DVDs available for all the other operas, and one gets the sense that Wagner was onto something when he expressed reservations about the score and its revisionary history.

Tannhäuser lies at the crossroads between the quasi-Weberian fabric of the Flying Dutchman and the astonishing musical world that began with Lohengrin. Musically, the opera’s language hadn’t quite settled in the mature music drama template that Wagner used to revolutionize opera in the 19th century.

Depending on the edition used, the music could also turn into a weird pastiche of traditional idioms intermixed with chromatic Tristanesque episodes. Although the composer’s creativity is evident in various stretches of the opera, its characters also feel more one dimensional compared with the great creations that populate latter works (Ortrud, one of Wagner’s most well thought out characters, would be born only five years later).

So, in anticipation of this summer’s fast approaching Bayreuth prima, I’d like to start a discussion regarding an opera whose life on recording and the stage has befuddled this Wagnerian for some time now. Is Tannhäuser fundamentally a problematic opera? Are its plot and thematic core/moral content difficult subjects to execute well for the modern regisseur? Does its wildly variant musical score (and its multiple revisions) pose issues for creating a consistent, well thought production? Let’s talk about Tannhäuser in the comments section below.