The lady in question

The story shows what may happen when corrupt individuals occupy positions of trust. 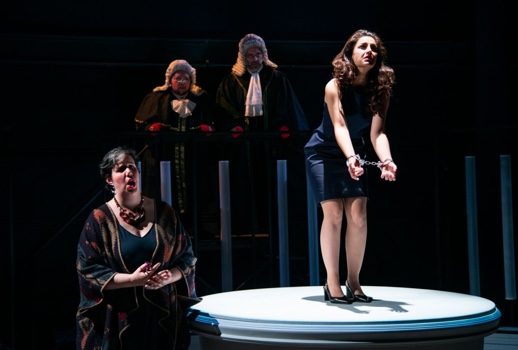 Though he composed several entries in the newly invented form of opera, Alessandro Stradella was better known for church music including oratorio, dramatizations of Biblical incidents. He set texts sympathetically (and sensuously), and possessed a melodic gift that would have conquered the world in a later age.

But he was, perhaps, best known, even in his lifetime, for getting into trouble—embezzlement here, pursuit of well-connected (often married) ladies there. In 1682, in Genoa, the brothers of his current amour hired an assassin to put him out of the way. This shocking end itself inspired at least three operas.

La Susanna is one of Stradella’s last and best known oratorios, created for church performance during the Lenten season at the court of the Duke of Modena and, like all pious dramas then, unstaged.

The original presentation, back in Modena, was composed for five singers, all of them male, as was then required in Italian churches: two soprano castrati, a mezzo castrato, a tenor and a bass. The mezzo, playing “Testo,” acted as compère, introducing the Apocryphal story of  “Susanna and the Elders of Babylon” and citing appropriate morals from it. An orchestra consisted of a harpsichord and five strings, played discreetly.

“Susanna and the Elders” is no longer a well-known fable—modern women perhaps prefer the story of Judith, also from the Apocrypha. Both ladies were beloved Biblical heroines, much painted, sculpted, enacted, sung, but Judith is active: she kills her oppressor. Chaste Susanna, accused of adultery, stands her ground silently, demonstrating faith and endurance.

In the Italian libretto that Stradella set, Susanna tells us that her tears confused her tongue and made it impossible to speak—in Biblical times women were not expected to do something so immodest as testify in court (the story is set in Babylon during the Jewish captivity there—after 586 bce). In part, her lack of defense is due to the unsympathetic judges conducting the trial, who angrily denounce this woman they say they have seen misbehaving.

Of course we know Susanna has done no such thing—the judges denounce her because she refused to submit when they themselves propositioned her.

The story shows what may happen when corrupt individuals occupy positions of trust. Heartbeat-Lafayette intend a parallel with the Me Too movement, and they emphasize this by making the prophet Daniel (a soprano), who saves the day, not a countertenor but an angry female academic assistant, who interrupts Testo (here a pompous academic), cross-questions the judges and humiliates them when their wickedness is proved. Having worn judicial gowns and rich red gloves, the judges are now stripped to their underwear.

The staging, by Ethan Heard with the aid of Emma Jaster, is simple and effective. The sets (which include a lot of statues representing male authority) are by Reid Thompson, the costumes by Beth Goldenberg, who has put modest Susanna in a wonderful blue body suit covered with little “water” decals, to imply her nakedness when the Elders assault her beside her garden pool.

On the stand, Susanna wears a proper black suit, to which the Judges append handcuffs. She does not find it easy to mount or descend stairs wearing those cuffs—a nervous clumsiness that makes its own point about her helpless victimhood.

Individual emotional points in the tale become wonderfully melodious arias for Stradella. The only lengthy scena is a “prison scene” (a popular trope on the opera stage then and ever since), in which Susanna suffers a dark night of the soul. But the singers do not only perform alone (as in, say, an opera seria) but in duets, trios, a choral quintet to conclude the first half of the program.

The text of these concerted movements might be identical, but instead of singing in canon (as in any Handel duet), the music moved harmonically, each voice contributing its own, often highly ornamental, version of the melody.

Our Susanna was Lucia Martín Cartón, who acted the broad range of this brief part with subtle and fully worked out demeanor. Her voice has a fine airy sound above the staff, useful for happy baroque angels; a certain dullness of the lower register disappears as she warms up.

Her prison scene, performed in an orange jump suit in Oliver Wason’s harsh, exposed lighting, held our attention through an version of the despairing aria-swift affirmation of faith cabaletta, a device that would become the basis of bel canto. Here we see Stradella discovering it simply because it suits his heroine’s predicament and his own melodic gift.

Sara Couden, whose mezzo smoothly and fearlessly approaches contralto range, played Testo, an academic at a women’s conference, presenting the story with many a stuffy side note and a well-feigned astonishment when “Daniel” takes the pointer out of her hands.

Ariana Douglas sang so appealingly in an early trio that I hoped she’d have more to do, and sure enough, outraged with the runaround Susanna was getting in the courtroom, she turned into Daniel the Biblical hero (but a female Daniel) before our eyes.

She sings with a lovely bell-like quality, but I suspect opening night jitters caused uncertainties of pitch and muddy coloratura in her summation, an aria that Stradella surely intended to ring out like an angel proclaiming the triumph of virtue.

The two dastardly judges, a short tenor and a tall bass, Patrick Kilbride and Paul Max Tipton, sang as if they believed they had done nothing wrong. To be fair, each introduced himself in an aria bewailing the lust besieging his heart, and furthermore Kilbride’s suave tenor and Tipton’s smooth, even soothingly hypocritical bass made us happy to hear their excuses and their vicious denunciations.

No doubt current politics had a place in inspiring Heartbeat Opera and Opera Lafayette to concoct this event, but Stradella’s golden melodies and the elegance of the performance it made the occasion more of a delight than political footnote. What this member of the audience felt was: Find us more Stradella. This music is too good, too fresh, to linger in oblivion.