Strangers in the night

One needs liberty in order to be a libertine. 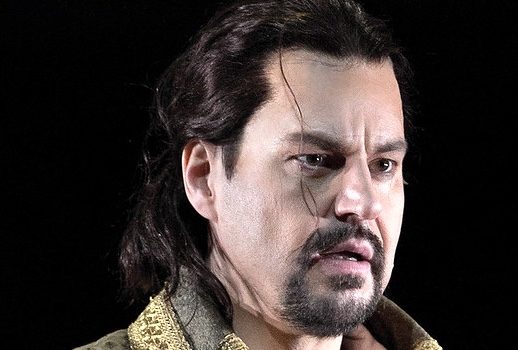 Michael Grandage’s production of Don Giovanni for the Metropolitan Opera is possibly the worst production I’ve ever seen at the house. It represents the very nadir of conservatism. Neither rudely provocative nor richly traditional, its listless laziness snuffs out the opera’s incendiary potential. It is startlingly unimaginative, managing, in its ineptitude, the rare achievement of insulting western culture.

To begin with, the set is nothing more than sliding walls designed to look like an 18th century version of Bye Bye Birdie’s telephone scene. And the static, mind-numbing blocking places the singers, generally, downstage center. Here, the poor artists try to rustle up some magic, churning out gorgeous aria after aria. In this sense, the performance feels more like a concert than a fully staged event.

Saddled with these sad burdens, the singers must carry the evening. In last night’s performance, Peter Mattei, as Giovanni, sang with an elegant legato, crooning so sensually that all seduction seemed destined for success. Adam Plachetka’s witty, richly sung Leporello attended him.

Guanqun Yu made for an austere, dignified Donna Anna. Her soprano had a shimmering, silvery quality; it cut through the orchestra with clean dexterity and even vibrato. If she did stumble, it was during the difficult “Or sai,” when her sound thinned and blanched.

Her Don Ottavio was the exquisite Pavol Breslik. His sturdy, darkly hued tenor surmounted the challenges of both “Dalla sua pace” and “Il mio tesoro.”

As the lusty, pastoral Zerlina and Masetto, Serena Malfi and Kihwan Sim were well paired. Malfi’s thick mezzo-soprano was especially pleasing—a complicated, textured voice that safeguarded her from a slip into anything remotely cutesy and glib. And Sim’s Masetto featured adorable comic timing and a hefty, cultivated bass.

Dmitry Belosselskiy was a fine Commendatore, sentencing Giovanni to his fate with booming, unquestionable grandeur. He was extremely satisfying.

And then there was the Metropolitan Opera’s cynosure of mediocrity, Susanna Phillips, whose continuous casting at the house affirms a general, critical ineptitude on the part of the company’s artistic leadership.

Her voice was banal, papery, unattractive; her acting was that of an amateur. As Donna Elvira, she presented the confounding paradox of being exceptionally uninteresting. That this artist is featured at the house regularly is, at best, an act of willful stupidity; at worst, it’s evidence of egregious bad taste. She was not very good.

The Met’s nimble orchestra, led by Cornelius Meister, bolstered the cast. While these musicians did their best to redeem Grandage’s crimes against culture, they could not make up for the disappointment of a missed opportunity.

In a recent discussion with the writer Ryan Tracy on Don Giovanni, Tracy mentioned the ways in which Giovanni functions as a queer figure within the text. The observation is astute.

To begin with, Giovanni never apologizes. Rather than release his position as a sexual deviant, he clings to it like a dog with a bone (pun intended); he prefers to be dragged to hell by a statue—priapism’s ultimate punishment. But his recalcitrance is just a symptom of a much larger perversion.

If one thinks about it, he is an antinomian in the tradition of Bersani, Genet, and Gide. He is anti-social, anti-communal, a bad citizen.

And then there is Giovanni’s itinerancy, a remarkably queer subjectivity. In his defense of gay cruising, the theorist Tim Dean, by way of gay leatherman Scott Tucker, had the audacity to ask of the straight world: “Why should lovers not be strangers?” It is a good question, especially in our age of rampant tribalism.

Why should lovers not be strangers? Dean poses this question with an eye toward queer promiscuity, citing within the practice of frequent, anonymous sex, “a remarkably hospitable disposition toward strangers.”

In other words, anonymous promiscuity is a mechanism for engaging with the other, without domesticating or conquering the essential strangeness of that shadowy figure. Through this argument, the radical, corrosive effect of multiple, unknown partners might actually be reconstituted as a responsibly ethical position, one that respects the boundaries of knowledge, personhood, and autonomy.

I can think of no better example of sexual itinerancy than Leporello’s catalogue aria, where the only distinctions within the mass of sex reported is ethnic diversity.

As Giovanni states in his own defense “Chi a una sola è fedele, verso l’altre è crudele,” he who is faithful to one, is cruel to the others. What, at first glance, might read as a trivial joke, should perhaps be thought of as a radical restructuring of human relations.

However, I understand that some might take issue with calling Giovanni queer, when he does in fact pursue the pleasure of heterosexual sex. Also, he is a privileged, male member of the nobility, not to mention a rapist.

One could argue that whatever makes him a queer outlaw also makes him a douchebag. But one needs liberty in order to be a libertine. And, perhaps, the imbrications of his sexual freedom with his social position make for an interesting argument in favor of identity politics.

That Mozart and Da Ponte had the vision to pursue these questions long before the sexual revolutions of the 20th century is a testament to their prescient genius. But also, as I’ve said before in the digital pages of parterre box, the epistemological debates over empiricism engendered by the Enlightenment are hardly settled.

Indeed, figures like Giovanni, Robert Lovelace, and the Marquis de Sade would fit perfectly within our own time. I can imagine them now, haunting some bar in Gramercy, running a movie studio, occupying the Oval Office, or harassing some poor girl on Tinder.