Tchaikovsky’s Iolanta and Bartók’s Bluebeard’s Castle both use themes of vision and revelation to ask compelling questions about knowledge, responsibility, and gender. 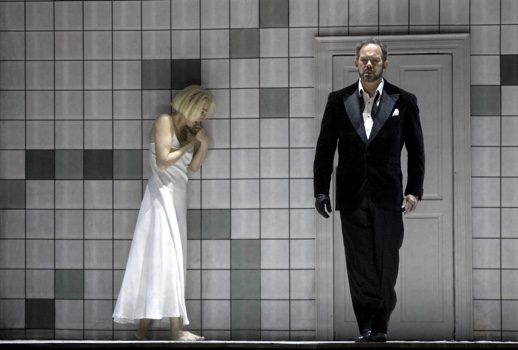 It makes so much sense for the Metropolitan Opera to program Tchaikovsky’s Iolanta alongside Bartók’s Bluebeard’s Castle. Both pieces use themes of vision and revelation to ask compelling questions about knowledge, responsibility, and gender.

However, where Iolanta’s heroine is more docile in her acquisition of vision, more prototypically an ingénue, Bartók’s protagonist falls more in the category of the “curious female.”

A fairy tale with psychological and gothic dimensions, Bluebeard’s Castle has a simple, episodic plot. Judith, having left her stable family, accompanies Duke Bluebeard to his castle as his new wife. In spite of the unsettling rumors she has heard about his previous wives, her fascination with him is an attractive force she cannot refuse.

In a large hall, she finds seven locked doors. Racked with curiosity, she demands that every door be opened one by one. And behind each door she discovers unsettling material evidence—devices of torture, weapons, treasure, and flowers—all covered, to some extent, with blood. Despite the dread these symbols provoke, she continues in her quest until she reaches the final room. Here, she discovers Bluebeard’s previous wives, all murdered. (Spoiler Alert!) She joins them.

Judith’s determination conjures a notorious genealogy of archetypical women: Eve, plucking fruit in the garden; Pandora, opening the forbidden box; and Lot’s Wife, notoriously pivoting toward Sodom and Gomorrah. In each of these ancient stories, female curiosity is swiftly and ferociously punished. And these figures have often served as misogynistic, cautionary tales for women in search of knowledge.

Based on the writing of Charles Perrault (which was, on its own terms, a literary adaptation of a folk tale), Béla Balász’s libretto for the opera whittles the plot to its most essential elements. And like most myths, the narrative’s linear simplicity belies its complexity. While Perrault’s telling is more literal, Balász’s libretto takes a Freudian approach; each room Judith uncovers represents an aspect of Bluebeard’s psyche.

The objects behind the doors are not all bad: some contain wealth and land. These things glisten and gleam. But as Judith opens each door, a more sickening portrait of Bluebeard begins to emerge. Perhaps, then, it would be better to leave the doors shut, to enjoy the treasure—the gold, the land, the jewels—without having to face Bluebeard’s actual character?

The tension between ignorance and revelation is exacerbated by the fact that Bluebeard asks Judith not to open the doors. “Judith, love me,” he begs, “ask me no questions.” And yet, when she inevitably demands further access to him, he acquiesces.

Judith’s tragic fate is tethered to her desire to see and know. And it is her agency that causes each revelation. Bluebeard begs her to leave the doors closed, to allow him some modicum of privacy; but Judith’s longing for disclosure overwhelms her. She wants a level of intimacy from Bluebeard he cannot bear. And something like shame dictates the contours of their relationship.

Drawing on the crises latent within the contemporary discourses on Carteisan duality, epistemology, and empiricism, the question of knowing another person was a major concern of Enlightenment philosophy. One can see these ideas at play in a similarly revelatory plot: Beauty and the Beast.

Both tales trouble the appearance of things, probing beyond the surface, asking: is the outer visage integrated with the inner soul? How well can we ever really know another person?

With these thoughts simmering deep below, Bluebeard’s Castle is something of a striptease, where each aspect of Bluebeard is revealed, much to the horror (and delight) of the onlooker. Strikingly subversive, Judith’s female penetration of the masculine psyche is a fascinating reversal of gender politics; and from this perspective, the opera is less a cautionary tale of female curiosity, and more of a searing referendum on masculinity.

In this sense, the opera remains deeply relevant (have we ever really escaped the preoccupations of the Enlightenment?). The deals struck between the sexes, between couples in power, and the tensions between extremely oppressed women and relatively less oppressed women remain morally precarious.

Moreover, despite all the manly swagger and braggadocio one might encounter in the public sphere, the masculine psyche remains one of the most obfuscated and frustrated objects of study.

Taking its cue from the opera’s prologue, in which an unnamed narrator questions whether art operates in the mind or on the stage, Mariusz Trelinski’s production casts aside a literal approach for a textured, highly surreal palette. He plays fast and loose with language and temporality.

Drawing on the visual semiotics developed in his production of Iolanta, there is a wonderfully cinematic element to Trelinski’s vision. Using projections, amplification, and sound design, the production evokes the mystery and wonder of the fairy tale genre. The prologue, recorded by Jan Frycz and accompanied by the sounds of a groaning forest and creaking castle, is especially effective.

In last night’s performance, Angela Denoke, as Judith, was serviceable. Her voice was large, dark, and striking. And if she failed to match the orchestra during the climactic fifth door revelation, the role’s difficulty served as something of an excuse. Her awkward, birdlike physicality highlighted Judith’s sense of displacement. And I admired her game, adventurous dramatic commitment.

Gerald Finley was an elegant, smoldering Bluebeard. With a warm, seductive baritone, his phrasing and dynamics were beautifully controlled. Though his bass-baritone may have seemed a bit narrow for Bluebeard, he made the most of his limited means to develop a potent characterization.

In Bluebeard’s Castle, the orchestra almost serves as a third character, rendering the inner turmoil of the couple with bittersweet ambiguity. Henrik Nánási made an excellent debut as the conductor. And while I may have wanted a little more oomph as Judith opened the fifth door (the key modulates into C major, thus establishing the limits of knowledge harmonically), Nánási’s concern for the singer’s audibility was certainly thoughtful.

I believe Bluebeard’s Castle is a special opera. I highly suggest going to see it, especially the Met’s current production. Bartók’s rich sense of mood and tone and an endlessly fascinating text make for a devastating combination. As the house dimmed to darkness, and the narrator intoned “Once upon a time…” in the strange, otherworldly Hungarian tongue, I felt a frisson of delight; I felt like a kid again, huddling around the fire for a ghost story.

Such feelings of mysterious wonder have often felt rare in the opera house, but Bluebeard’s Castle has the uncanny ability to conjure the puzzlement and dread of childhood, the tantalizing promise of once upon a time.