Reach out in the darkness

Iolanta was crowned on Thursday evening by Sonya Yoncheva’s haunting portrayal of the blind title character. 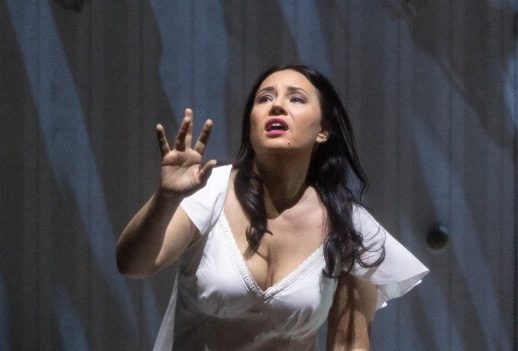 In the riveting Tchaikovsky/Bartók double-bill that has returned to the Met one heroine struggles toward light—and love–while the other descends into a nightmare of eternal midnight. My sole concern, however, is Iolanta, the rarely staged yet rapturously beautiful fairy tale which was crowned on Thursday evening by Sonya Yoncheva’s haunting portrayal of the blind title character.

Premiered in 1892 as a companion piece to The Nutcracker, Tchaikovsky’s one-act work depicts the story of the sightless daughter of the King of Provence who in his over-protective mania has always kept her secluded from society. Ironically his all-consuming belief that she must never learn of her affliction proves to be the outright cause of her inability to be cured.

But one day a foreign count wanders by (it isa fairy tale, after all) and inadvertently reveals the secret to her during one of the greatest of all operatic love duets. Then through a combination of mind-games and hocus-pocus, Iolanta gains both her sight and a suitable mate–in just over 90 minutes.

There, though attended by her devoted nurse and maids, she weeps from an unshakable ennui she can’t fully comprehend.

In his least successful directorial gesture, Trelinksi links Iolanta to a hunted deer initially seen in striking animated projections as it’s brutally hunted. When the King first appears, he matter-of-factly guts one of the deer he has just killed, perhaps suggesting a less benign motive behind his concern for his daughter.

The opera’s gloriously sunlit happy ending is puzzlingly undercut by Trelinski: his curious final tableau focuses on the King unhappy and alone after the crowd has departed to celebrate his daughter’s wedding.

Otherwise Trelinski’s intense Personenregie (he returned to supervise this revival) elicited vibrantly committed performances from his singers, in particular Yoncheva who touchingly embodied Iolanta’s journey from a soulful sadness to a reticent awakening to love to a devastated revelation of her blindness.

The libretto by Tchaikovsky’s brother Modest doesn’t shy away from a complex exploration of Iolanta’s transformation: she isn’t initially so keen to see and when she can she is shocked and scared by the images that bombard her.

Yet the inevitable destination of her archetypal journey must be marriage and Yoncheva’s high-wattage smile transmitted her romantic apotheosis out into the house even through the scrim which hilariously prevented her from grasping the big bouquet hurled at her during the bows.

The title role suited the Bulgarian soprano’s current vocal state better than some she has recently undertaken. Last spring’s Luisa Miller in particular cruelly exposed her increasingly wiry and worn top register. B

ut Tchaikovsky’s writing lay consistently lower than Verdi’s and she exploited that especially in the meltingly beautiful opening scenes with her caretakers: the gruffly attentive Larissa Diadkova and the flighty if less-devoted Ashley Emerson and Megan Marino.

Her Prince Charming, or rather Count Vaudémont, was to have been Matthew Polenzani but he cried off sick in the late afternoon and was replaced by a startingly at-ease Alexey Dolgov, fresh from a run at the Met as Cassio in Otello. I missed that Verdi portrayal but when I learned of his substitution, I recalled his shattering Lensky in the Met’s Eugene Onegintwo years ago.

Roguishly playful with his BFF Robert, hesitantly but persistently ardent with the shy Iolanta, Dolgov charmed all with his lean but expressively poetic tenor. Although one occasionally wished for a bit more power particularly in the challenging climatic pages of the magnificent love duet, I suspect few in the audience left the opera house still disappointed by Polenzani’s cancellation.

Robert, Iolanta’s erstwhile fiancé, is a gift of a role with not too much stage-time but one of the opera’s big hits: a stirring and passionate aria saluting the charms of his mistress. Alexey Markov delivered it with the same expansive fervor he exhibited four years ago.

Bass Vitalij Kowaljow made his Met debut sixteen years ago but unfortunately we don’t hear him there all that often. But his bold rendition of the King’s mournful aria proved a real highlight and he convincingly brought off Trelinski’s complicated view of that character.

Like Markov, Elchin Azizov returned to his 2015 role, that of the mysterious Dr. Ibn-Hakia and again imbued his incantatory aria with hypnotic power. Tall and forbidding, bass Harold Wilson made an arresting impression in the small role of Bertrand; one wanted more.

He revealed many details that I’d never before heard in decades of listening to this work but sometimes I wanted more propulsion, more forward motion, more excitement when instead he was apt to linger. But I was grateful to have someone other than Valery Gergiev serving up my Tchaikovsky at the Met.

Of course, I remained after an exceedingly long intermission for A kékszakállú herceg vára, but that mystifying work is for Patrick Clement James to discuss and I eagerly look forward to reading all about it.

Even if the Bartók isn’t your cup of serial monogamy, Iolantais irresistible, and at a length only slightly shorter than Salome, it’s a fully satisfying portion on its own. As I’ve said, it’s long been my favorite Tchaikovsky opera.