At tonight’s performance of Aida at the Met, the Triumphal Scene horses suddenly panicked and tried to bolt from the stage. I can’t say I blame them. 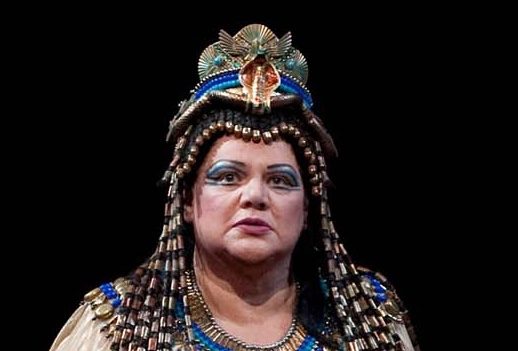 UPDATED: At tonight’s performance of Aida at the Met, the Triumphal Scene horses suddenly panicked and tried to bolt from the stage. I can’t say I blame them.

This new cast featured some of the most awkward and labored vocalizing I’ve heard in some time, on any stage. The orchestra, led by San Fran Opera ex-maestro Nicola Luisotti, was at peak slowness. Even the Met chorus, usually so languid and liquid in the consecration scene capping act one, sounded like they’d already lost the war.

And yet the worst of the lot was still strapped into her slave gear. In the Met’s newest lineup, the chief persona non grata was the Ethiopian princess herself, American “spinto” Kristin Lewis, who was subbing in last-minute for a mysteriously indisposed Sondra Radvanovsky.

While hardly a newcomer to the part (she’d previously mauled it in Vienna, Milan, Verona, and Hong Kong), Lewis had been granted only a few weeks to prepare for her New York debut.

Expectations were high. And yet the startling replacement casting seemed to backfire on opening night, just as soon as attendees heard the wobbly opening scales of Lewis’ “Ritorna vincitor.” Pitchy floating, faint under-singing and a shrill, witchy screech at the top of her range that betrayed poor technique.

Lewis certainly looked glamorous enough in her emerald charmeuse, but too often her intonation swayed in and out of pitch like a papyrus in the wind; she struggled to fill the house (poor Luisotti often had to shush up his horns so Aida could be heard); or else the voice would simply deflate altogether, done in by the endless legati of the third act.

If hooty (and possibly ill?) Aleksandrs Antonenko had been the vocal embarrassment of last year’s Aida cast, this year offers a dismal a return of the crypt. Only here, the dud was being buried alive in the title role.

Still, there were fleeting moments of redemption. I continue to revere Sonja Frisell’s late-80s, Indiana-Jones-ride staging of the Verdi staple—“Treasures of Tutankhamun” indeed!—full of bombast and falling platforms. (Maybe the perfect first guncle outing for the niece who doesn’t “know” opera?)

And while I still wish the third act weren’t quite so dark, and Alexei Ratmansky’s tiptoe-twirl choreography quite so daft, Gianni Quaranta’s cinematic sets make for superb temple viewing.

This new cast also showed a few stars continuing to grow into themselves. Tenor Yonghoon Lee, so searching as Don Jose last November, turned in a heroic, if overly brash, Radamès .It’s true that Lee’s voice can pose a bit of a puzzle: sometimes overly pushy at the top of the range, with a worrying tendency to sing from his jugular and drown out his leading ladies.

But he can also prove a sensitive musician. In his hands, “Celeste Aida” proved unusually introspective, the Memphis warrior delivering the aria trepidatiously, as though his love for Aida were a pre-battle psychic displacement meant to soothe his nerves.

And thank Ptah for veteran Dolora Zajick, now in her mid-60s and seemingly the only cast member who knew how to spin gold froma Verdian line.

Zajick, though far from eclipsing memories of the nucleosynthetic Anita Rachvelishvili in the same role last year, has performed Amneris countless times. The trademark “full-bore” sound of her mezzo has gradually lost some of its cream and volume at the bottom of the range, but her top remained perfectly zaftig on Monday, and, in act four, burst with drama.

Bass Soloman Howard and baritone Roberto Frontali sang with sonorous dignity as the king and Amonasro—especially Frontali, whose take on Rigoletto later this season at the Met I’m now quite eager to hear.

Vitalij Kowaljow may not be an ideal Ramfis—I found his high priest of Egypt a tad diffident—but this quality should make for a fascinating King René in Iolanta, a role that sometimes gets mowed down by basses, and a role the more subtle Kowaljow is slated to play later this season.

While those who, like me, were fired up to hear our beloved Radvanovsky play Aida may not have had much to celebrate last night, 2018’s breakthrough Tosca is still expected to headline the show on Feb. 28, March 4, and 7.

However, like Lewis in the Nile Scene, I’m not holding my breath.