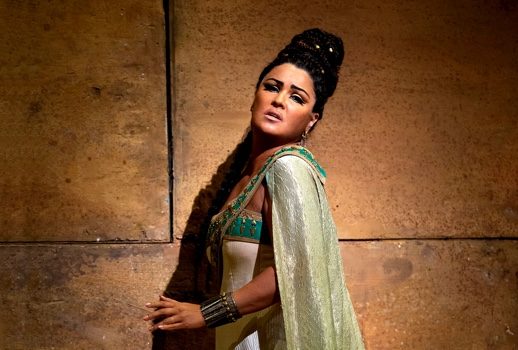 How to describe Anna Netrebko’s performance in Aida without slipping into hyperbole? Impossible, but I’ll try.

If the Metropolitan Opera’s golden curtain wasn’t already bipartite in structure, I suspect her singing would’ve rent it in two.

Or, think of the climactic scene in Raiders of the Lost Ark—when the Nazis open the eponymous container, and their faces melt as they gaze upon the countenance of God.

Or, I am surprised to say that at her curtain call, awash in waves of applause, she didn’t float from the stage and magically pass through the rafters of the house into the heavens, and take her place at the right hand of the Father.

Or, I believe, this morning if you go to the stage of the Met, you will find the mark of a lightning bolt burned across the surface, the distinct smell of sulfur in the air, and a pillar of salt upstage right (remnants of some poor super who unwisely turned to gaze on the diva at her exercise.)

What other singer unleashes a river of molten magma, only to cool it into a silver filigree of pianissimo? Who else sings with such electric musicality: darkly somber, plaintive, furious, and victorious? Where else does one find the genteel vulnerability of Deborah Kerr, mingled with the sensual power of late prime Liz Taylor? Every other performer is in black and white; Netrebko is Technicolor.

Her Aida was what early parterre box might have described as deranged. I know she has left me deranged.

For the past few months I’ve been tracking her movements on Instagram, like a Wiseman consulting the stars, desperate for light in Advent’s gloomy darkness. I’ve anticipated her Aida since she debuted in the role at Salzburg. Footage from that performance, posted online, served as something of a promissory note, a covenant, and a prophecy; and last night she delivered on that promise to her New York devotees.

After her “O patria mia,” as the thunderous applause eventually stilled, someone screamed out from the balcony: “REGINA!” Regina, indeed! Salve Regina! Save us from our woes—our Sondra Radvanovskys, our Olga Peretyatkos, our Joyce DiDonatos, and all the other lesser deities groveling in your wake!

Come and save us from our own poor taste, our own willingness to humor insincerity, detachment, and intellectual posturing. Kyrie eleison! Come and save your chosen people, your elected cult. And heed my warning, you capricious homosexuals of Gotham: repent! Abandon your false gods. Turn from your Flemings, your Goerkes, your Yonchevas! Rally around the true queen! Supplicate to your goddess!

And yet, how could one compete with such a blistering rival? Was there room for anyone else on the stage? Anita Rachvelishvili, as Amneris, proved formidable in the task.  She projected a large, round sound, oscillating between steely ferocity and easy warmth. Her phrasing revealed a consummate musician. And as an actress, she complicated the character with a refreshingly ambivalent reading: less shrewish monster; more a woman in love, warped by desire.

But it was odd to see these awesome figures pursuing their claims to such an unsavory prize. Aleksandrs Antonenko, as Radamès, sounded like Kermit the Frog in ill-fitting armor. Out of tune, wobbly, inflexible, and ugly—with swallowed vowels and laborious phrasing.

And in its pearl anniversary, Sonja Frisell’s production remains an example of the power of conservatism. With towering sets by Gianni Quaranta that recall Egyptian hieroglyphs in a palette of gold, silver, and blue, the design continues to prove that a director need not be radical or gaudy in order to engage and enchant the audience.

True, some might object to Netrebko’s murky vowels, “Jersey Shore” makeup and gratuitous flashes of leg in Acts III and IV. But, as far as I’m concerned, the singer can do whatever she wants. When an artist sings so gloriously, all bets are off.

As the prophet Isaiah might have noted, Anna’s ways are not our ways; her deeds are unlike our deeds. And as his fellow augur Wayne Koestenbaum taught us, “What distinguishes the diva you have chosen from the divas you merely admire is that you are interested in everything your chosen diva has done—even the mistakes.”

And (should you doubt it) Netrebko is the diva I have chosen. She has baptized me with fire, burning away all that is unworthy of her. She is a life-affirming artist. She comprehends the unique power of opera. She continues to master the form, in all its discipline and jouissance. She commands the rights and privilege of the diva.

Her respect for tradition is palpable—her love of the art form, the women who came before her. She is the next in a long line of deities proceeding through history and into immortality. So, I too cry “Regina! Regina!” and prostrate myself before my queen.

“Perhaps there has never been a more sublime utterance, or a thought more sublimely expressed, than the well-known inscription upon the Temple of Isis (Mother Nature): ‘I am all that is, and that was, and that shall be, and no mortal hath raised the veil from before my face’.” Kant, The Critique of Judgment