Sondra Radvanovsky changed my opinion of her through a single performance—I’ll never think of her the same way again; the power of her singing overwhelmed my previous impressions. 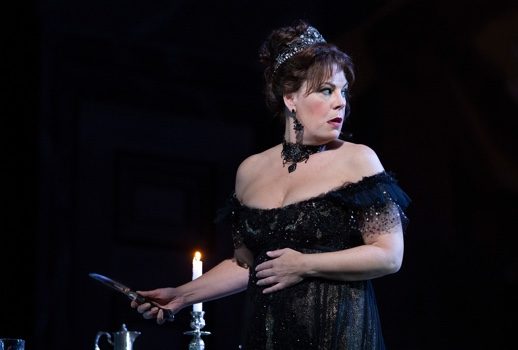 As readers of parterre box may know, I am not inclined to write sympathetically of Sondra Radvanovsky. I have found her voice tinny, ugly, and often unhinged and intractable. And in a recent review of Aida at the Met, I compared her unfavorably to Anna Netrebko.

But now I must eat my words. And I am happy to do so, because there’s nothing better than a diva asserting her authority, shoving her relevance down my throat. Which is to say, Radvanovsky changed my opinion of her through a single performance—I’ll never think of her the same way again; the power of her singing overwhelmed my previous impressions.

Making the best of her (sometimes limited) means, on Thursday night Ms. Radvanovsky unleashed a Tosca to be reckoned with at the Metropolitan Opera. With a stormy performance, she conjured and matched the ghosts of the great Toscas before her, including the formidable monument of Maria Callas, as well as my personal recollection of the very corporeal Netrebko, who took on the character last season.

No, her voice was not particularly beautiful. Her intonation was not always precise. Her singing had a brittle texture. But where Radvanovsky succeeded was in her use of an imperfect instrument. She successfully deployed it to convey the extremes of love, disgust, and horror. She was refreshingly indelicate. And like Netrebko before her, she modulated seamlessly through the character’s extreme emotional trajectory.

While Radvanovsky blazed with fierce intensity, tenor Joseph Calleja’s Cavaradossi blanched under her fiery disposition. I hoped that his colleague’s intensity might jumpstart him, inspiring him to higher artistic aims and objectives. Instead, he seemed to dim under her virtuosic star-quality.

His tenor had a slightly nasal quality, despite its dark color. At first, this had the effect of bringing a ringing ping to the sound. But as he ascended the staff for the more climactic moments of his arias, the voice thinned and lost its luster. Where the demands of her role drove Ms. Radvanovsky to more intense, riskier exercises, Calleja pulled back.

As is often the case, Radvanovsky found her match not in her lover, but in her foe. Zeljko Lucic was a characteristically stalwart Scarpia, at turns chilly and lascivious. His scenes with Radvanovsky in Act II had an especially tempestuous quality. The two, equally matched, created a combustible tension, stripping the conflict to its most essential, starkest elements.

Oren Gradus’ Angelotti was heroically virile, and Patrick Carfizzi, as a sacristan, brought a lovely, substantial sound to a role more usually assigned to character singers. He played the part for laughs, expectedly, but he also brought depth and beauty to more marginal music.

Conductor Carlo Rizzi led the Met orchestra with a healthy dollop of chutzpah, infusing the score with muscular intensity. He met La Radvanovsky note for note, in terms of aggression and focus. This almost competitive symbiosis made for a very satisfying evening musically.

Dramatically, Sir David McVicar’s production reads as a penitent reparation for Luc Bondy’s production from 2009. It’s soporifically conservative, devoid of artistic intervention. With a raked stage, the set’s forced perspective was the sole innovation (if one could call it that.) Otherwise, the characters were reduced to ambling back and forth.

In the end, the night belonged to Radvanovsky, who carried the evening on her shoulders. As the eponymous heroine, the entire opera is built around her; so, with the startling assertion of her powers, I would call it an only slightly qualified success.

In the meantime, I hope she will accept my heartfelt apology. I was wrong to dismiss her in the past. And I hope this review will serve as a meager means of atonement.