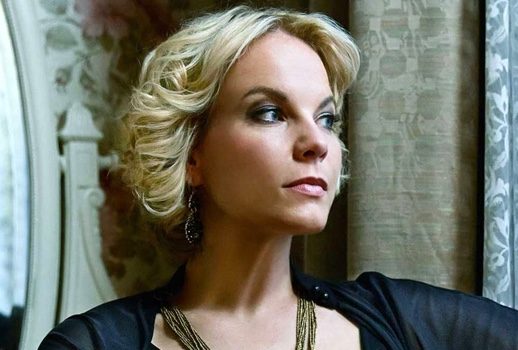 The problem was not the mezzo’s talent; she is an artist with a prodigious instrument, adept technique, and an expert musicality. It was, instead, a refusal to fully engage with the material on an artistic level. She did not deploy her extensive capabilities at their full effect. And so, despite her radiant sound, Garanca’s meek approach suggested a rehearsal rather than a fully formed presentation.

To begin with, Garanca used a music stand for each set. I don’t think she really needed it; she rarely glanced at the music. But, she clung to the stand as if it were a life raft. I have seen a few professional recitals lately where the singers used music stands. I find it unforgivable.

Unlike a pianist, a singer can’t really perform while holding onto a stand, stealing glances at the words, and turning pages. It is a terrible distraction. Worse, it looks unprofessional. The audience has paid a lot of money to hear you sing. Do your job; learn your music.

Consequently, a stiff, detached tentativeness permeated Garanca’s entire performance. And while her technique was flawless—shimmering sound; depth and flexibility; a vast, sundrenched ocean of color—her singing was marred by a refusal to fully inhabit the text. She seemed to ask for permission, when the very high quality of her talent guaranteed authority.

The great soprano Catherine Malfitano once told me, “Patrick, if you sing well you can do anything you want.” Her point, I believe, was that if the voice is technically solid, than a performer is free to make daring choices. The technique, the talent, and the hard work of rehearsal grant one a spontaneous freedom. The priority is, of course, the singing—but bold, reckless dramatic moves (even if they’re miscalculated) are easily forgivable if an artist produces excellent vocalism.

Garanca’s beautiful singing granted her plenty of room to take risk, to inhabit text creatively. I wanted her to throw the music stand aside and step into her own artistic power. Instead she shielded herself with it, all while looking dead behind the eyes.

(If pianist Kevin Murphy was equally tentative, his stiff approach was certainly more forgivable—he stepped in for Malcolm Martineau, who was out due to a death in the family. And, maybe, this provides some explanation for Garanca’s approach.)

The program began with selections from Myrthen by Robert Schumann. If, at any point, Garanca’s jitters worked for her, it was in this opening set of songs. Dressed in a gown of jewel-toned purple, she sang demurely. And while her German seemed a bit wonky (odd vowels and mushy consonants), her singing had a blunt quality to it.

For example, in her very first song, the famous “Widmung,” her breathless, ruffled demeanor gave Friedrich Rückert’s cheesy words an air of emotional authenticity. As is true with most successful melodrama, romantic sentiment dilates best in a one-dimensional context, stripped of irony.

Indeed, Mathilde Wesendonk’s excellent verse provides opportunity for theatrical invention. In poems like “Der Engel”and “Im Treibhaus,” the poet uses literary ambivalence to stoke the fires of eroticism. But, instead of opening up the mezzo-soprano to a field of wild possibilities, the text’s uncertainty seemed to shut her down. She did not make a single interesting dramatic choice.

After the intermission, Garanca returned to the stage dressed in a flowing red gown. I hoped that the change in dress would provoke a change in demeanor. But, unfortunately, she remained ill-at ease, looking bored and disengaged.

She sang Ravel’s celebrated Shéhérezade. The promise of transportation indicated by the notion of her voice on such sumptuous music was again reneged. To begin with, Shéhérezade, as a recital piece for piano and voice, is underwhelming. Ravel’s orchestration is so smartly articulate, that a lone piano seems merely to muddy the waters. However, Murphy did his best to draw out the latent mysticism.

More disappointing was the mezzo-soprano’s refusal to relax. Her phrasing was awkward and her body language indicated discomfort. She was unfocused. Her gaze wandered through the hall. It wasn’t until her final set of de Falla songs, Siete canciones populares españolas, that the singer’s icy, indifferent persona was finally put to good use. Her characteristic aloofness served the elliptical text.

But ultimately, Garanca seemed uncomfortable in all her recital repertoire. And I don’t think she had any fun. My observations regarding her cool skittishness are not original. As Christopher Corwin wrote of the mezzo, Garanca is “in the midst of reinventing herself.” And, as Corwin rightfully noted, it is roles like Dalila in Samson et Dalila at the Metropolitan Opera that provide the means of reinvention.

But if that is the mezzo’s ongoing intention, then her recital at Carnegie Hall did not present a clear argument for reconsideration. Especially when stripped of the support that operatic productions provide—costumes, dramaturgy, direction, other characters with which to interact—Garanca’s artistic shortcomings became all the more obvious.

It was only during her encores, when she finally set the music stand aside, that she took possession of the room. After an unfamiliar  Latvian song, Garanca performed two well-known selections from the operatic canon: the Habenera from Carmen and “Mon coeur s’ouvre a ta voix” from Samson et Dalila.

Both performances displayed the gravitas and grace that were missing from the recital proper. The distinction between her encores and her program revealed what Garanca had been withholding throughout the evening. I hope that she can, at some point, bring that kind of self-possession and dramatic daring to more nuanced, yet essential, repertoire.