For opening night 2018, the Met offered the creaky but appealing biblical epic Samson et Dalila, presumably as a vehicle for Elina Garanca and Roberto Alagna. 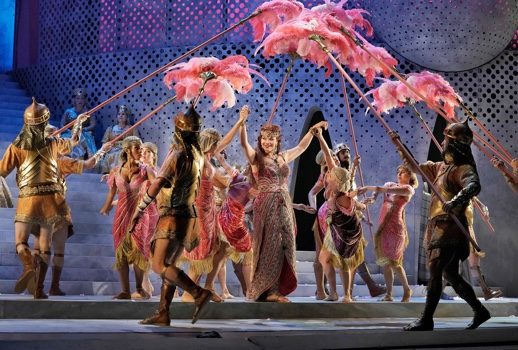 The creaky but appealing biblical epic reappeared after more than 12 years in an aptly flashy production by Darko Tresnjak, mounted, presumably, as a vehicle for Elina Garanca and Roberto Alagna. Monday night found both stars at less than their best—for wildly different reasons. This enjoyable Samson, part pious oratorio, part campy revenge-girl seduction scheme, however may prove an audience-friendly popular success the company needs as it struggles to nightly fill its enormous theater.

It’s hard to imagine that Saint-Saëns had such a hard time producing what would turn out to be by far his most popular opera. After first envisioning it as a sacred concert work depicting an incident in the book of Judges, the composer was convinced to instead create an opera.

However, Samson, as it depicted a religious subject, ran into censorship troubles in France and eventually premiered in Germany, a decade after Saint-Saëns begin to work on it. Fifteen years later it finally reached the Paris Opéra in 1892, around the time of its US premiere in concert at Carnegie Hall.

Dalila’s ravishing arias have proven as irresistible to divas as they are to Samson. After years of nearly unanimous acclaim in trouser roles and bel canto heroines, Garanca has been in the midst of reinventing herself. Recently she has embraced Eboli in Don Carlos and Santuzza in Cavalleria Rusticana to an occasionally equivocal response. Dalila even more than the other two may prove to be a questionable choice. 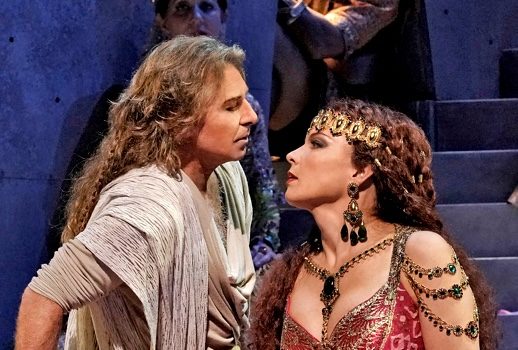 Despite her best efforts, the ultimate verdict for me must be that the music for Saint-Saëns’s sultry heroine just lies too low for this artist’s lush, ruby-colored mezzo. In the first act particularly, she frequently plunged into a forced, even ugly chest voice. I was startled to hear such sounds from a singer I’ve admired for the exquisite beauty and taste of her singing since I attended her Met debut as Rossini’s Rosina 10 years ago.

She has been quoted as wanting to throw off her “cool” image by undertaking these more passionate roles; perhaps a reaction to those who have found her much-traveled Carmen too aloof and detached. As Dalila, Garanca wholeheartedly embodied Tresnjak’s vampy Philistine and looked smashing in a very becoming flowing auburn wig and Linda Cho’s sensuous costumes, particularly the striking lime-green sheath she revealed during the enthralling “Mon coeur.”

Yet for all Garanca’s dramatic persuasiveness, Dalila’s usually surefire “Printemps qui commence” and “Amour viens aider” failed to make their usual impact as she often strained for volume in the lower-lying passages. When the line did rise higher however she revealed a big ringing top.

And yet for all her unsuitability Garanca—with Alagna—provided one of the most bewitching quarter-hours I’ve experienced in an opera house in a long while. Exploiting Sir Mark Elder’s exceptionally spacious tempi, she transformed the hackneyed “Mon coeur” imbuing its long phrases with incomparably and intoxicating longing.

Alagna beautifully conveyed Samson’s uncontrollable rapture in the face and body and voice of such unimaginable temptation. That sequence alone made one grateful to the Met for reuniting its memorably doomed Carmen and Don José of eight years ago. 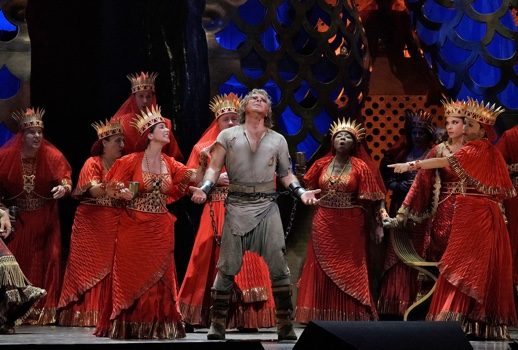 The tenor’s schedule is lately dotted with many performances of Otello, Aida, Andrea Chenier and Turandot. Despite these engagements, he is not a dramatic tenor and, at 55, the stress and strain of a long demanding career is increasingly—and distressingly—audible. While he still uses it with some of the old elegance, the voice has become taut and brawny with little beauty.

Perhaps because he hasn’t sung an opera for several months due to his controversial last-minute cancellation of Lohengrin at the Bayreuth Festival, he started out strongly on Monday night with a ringing exhortation to his fellow Israelites. His palpable and steamy chemistry with Garanca’s Dalila encouraged one forgive his explosive high note at the end of “Mon coeur.”

The beginning of the third act with Samson alone pushing the grist mill showed Alagna at his strongest; “Vois ma misère” was most moving and a couple of shredded high notes only added to situation’s poignancy. But these proved to be alarming premonitions of the multiple cracks that plagued the tenor during the final scene. His hoarsely disastrous lunge at the climactic B-flat, coupled with Tresnjak’s inept imagining of the ensuing cataclysm, brought the evening to an unfortunately limp conclusion.

Although Alagna sang well in Cavalleria Rusticana and Pagliacci at the Met earlier this year, this alarming Samson brought back memories of his unfortunate Des Grieux on the first night of the new Manon Lescaut several years ago. Perhaps he was once again tired from rehearsals but it seems he’s become increasingly unreliable in the challenging roles he’s been performing.

Despite its final misfire, Tresnjak’s straightforward staging was mostly effective eliciting only a lone volley of rapid staccato boos at the end. He wisely embraced both extremes of the work—its static religious fervor and its lurid exoticism. There was a perhaps a disappointing lack of novelty in his strictly traditional reading other than Dalila’s seeming last-minute crisis of conscience.

Otherwise the action proceeded almost exactly as one might have imagined it in a production from the 1950s—not necessarily a damning thing for an opera as seemingly straightforward as Samson. 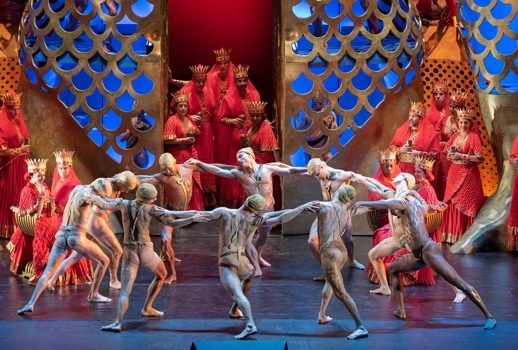 If there was any nod Monday to the 21st century it was in Alexander Dodge’s spare, mildly abstract sets made up of a patterned grillwork that often through tricks of Donald Holder’s lighting design became transparent. Most impressive was the final scene’s spectacular temple, three rising tiers surrounding a massive golden male torso split in half.

One imagined that the denouement would have Samson step into that tall divide and push the halves so that they dissolved into rubble but no such coup occurred. Instead a stock-still Samson, like the heroine of Carrie, caused mass death and destruction by telekinesis… or maybe it was prayer?

Before that limp ending Austin McCormick provided a cramped but sinuously satisfying Bacchanale which due to the enormous set was awkwardly confined to just the front ten feet of the stage. The Philistines it seemed were all very tastefully decadent. The mighty Met chorus excelled particularly in the opening as the Israelites mourned their enslavement and in the final scene when the Philistines viciously mocked the blinded Samson.

Despite the extreme slowness of much of Dalila’s music, Elder who celebrating the 30th anniversary of his Met debut drew richly monumental playing from the orchestra while also being exceptionally considerate of his singers. His serious approach worked best in Israelite passages though he brought a beguilingly light touch to the charming if kitschy “printemps” dance episode with Dalila’s attendants.

At intermission I spotted Anita Rachvelishvili and couldn’t help wondering how her richer, earthier mezzo might better suit Dalila. Met audiences will have the chance to find that out when this production returns on March 13 starring her and Aleksanders Antonenko. But first, seven more performances (and an HD transmission on October 20) of Samson with Garanca and Alagna remain.