He returned. He sang. He didn’t get hanged. 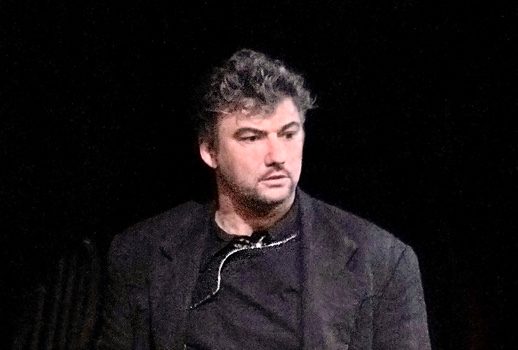 He returned. He sang. He didn’t get hanged.

After more than four long years and a recent saloonful of publicity, the world’s most famous tenor performed again at the Metropolitan Opera. It wasn’t a triumph; neither was was it a flop. But it was very good to have Jonas Kaufmann back Wednesday night even in a lackluster if occasionally touching revival of the aging elephantine production of La Fanciulla del West.

Just over two weeks ago Patrick Clement James wrote about this opera when it opened at the Met but the house last night was notably full and expectant, eager to finally see and hear Kaufmann after three consecutive high-profile cancellations. To my surprise there was no entrance applause when the divo first burst forth clad head-to-toe in black and carrying a saddle but Puccini’s bustling music and a cowboy-crowded stage didn’t exactly invite audience participation.

As the bandit Ramerrez disguised as good guy Dick Johnson, Kaufmann, despite few rehearsals, confidently entered into the action immediately establishing an electric connection with Eva-Maria Westbroek’s strapping but shy Minnie. Their palpable chemistry was the evening’s most memorable element as they movingly portrayed wounded outsiders desperately hoping for even a brief escape from their lonely lives.

A clumsy waltz was over too quickly but as the first act ended their hesitant flirting banter, abetted by some of Puccini’s most alluring love music, stirred up more than a few sniffles around me.

While Kaufmann’s Johnson was all silken allure at the Polka Saloon but when he showed up at Minnie’s cabin he became a shockingly lusty seducer dropping the pretense of romance and insistently pursuing his conquest of Minnie’s first kiss. But when that kiss was delivered, there was an unmistakable softening in the criminal’s mien—for a brief moment he dropped his mask and became a vulnerable and lovable being and we saw instantly the man Minnie would soon risk all for.

After his sordid past was revealed by Rance and his men Kaufmann ably embodied Johnson’s bleak fatalism which enveloped him until that fleeting moment before his imminent lynching when he pled for Minnie to be protected from his ugly fate. In an opera otherwise doomed to the sidelines for its lack of audience-pleasing arias Johnson does get three shining minutes of unmistakably Puccinian pathos, “Ch’ella mi creda.”

Kaufmann’s darkly throbbing—but immaculately sobless—tenor soared to finally reveal what all the crazy hype around town lately has been about. In a performance otherwise lacking in beauty this was an indelible oasis of the easy-on-the-ear opera ecstasy that keeps the Met sort-of filled for evening after evening of Puccini these days.

Not that Kaufmann hadn’t been singing well all evening, he had but the voice did sound a bit heavier and darker than when I last heard him at the Met in 2014. While never coming across as particularly Italianate, his burnished instrument rang out securely on top and put to rest any suspicions of decline that he had joked about at Carnegie Hall a few weeks ago: he does turn 50 next year after all.

His solo curtain call at the end was gratifyingly self-effacing: a relatively quick smiling bow and then back in line with his fellow performers to whistle appreciatively when Westbroek strode out. The audience was very appreciative but not wildly so; I had imagined a much bigger roar. I couldn’t help but wonder if there was lingering disappointment that they were attending “difficult, challenging” Fanciulla rather than the Carmen or Tosca he had failed to show for.

Or maybe Marco Armiliato’s drably competent conducting of Puccini’s magical score just sucked the enthusiasm out of the occasion? However, the lusty men’s chorus did their bit and with the exception of Oren Gradus’s ghastly Jake Wallace the smaller roles were well done.

Standouts were Michael Todd Simpson’s tall and sympathetic Sonora and James Creswell’s arresting Met debut as Ashby. There’s much more to Jack Rance than Zeljko Lucic’s blunt portrayal revealed but he was in good voice and snarled and grimaced to some effect. 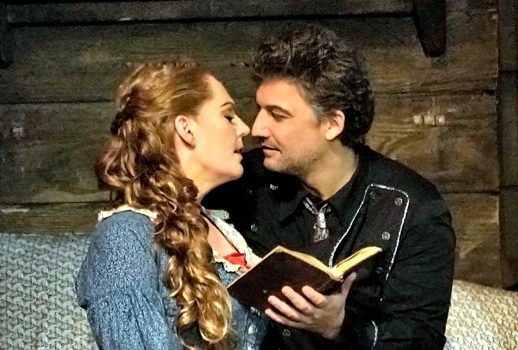 And what of the “Girl?” It’s hard to think of a more frustrating recent Met portrayal than Westbroek’s golden-haired Minnie. Veteran of many Fanciulla productions by now, she was in many important ways ideal: forthright yet vulnerable, commanding but fragile, confident yet a mass of insecurities. Her soprano while not the most beautiful is instantly identifiable and all of a piece with a middle of great warmth and character. But, ah, those high all-important high notes?

After Turandot, Minnie requires the most secure top of any Puccini heroine and Westbroek just doesn’t have it. I was assured that on Wednesday she was in better form than she had been on opening night but even so she failed to soar, flatting and spreading harshly in nearly all the climaxes.

After a riveting if strained second act she also tired noticeably, and her nick-of-time rescue of Johnson was disconcertingly small-scaled though she melted a few thousand hearts when pleading with the murderous mob to remember her kindness toward them.

The upcoming HD of Fanciulla on 27 October should be approached mindfully. Expect hulking, ultra-realistic sets that take 45 minutes to change in which a never-interesting 27-year-old production will be played out with steady enthusiasm if no great flair leavened by entrancing soprano/tenor charisma.

If you’re lucky the sound engineer will turn down the volume for Minnie and back up for Dick. But concentrate on your popcorn when they go for their high notes together.

A final note: after two recent Carnegie Hall button giveaways I was psyched for a complimentary Polka Saloon bar-wipe but came away disappointed.