As opera’s reigning tenor-superstar, Jonas Kaufmann can pretty much do whatever he wants and a sizable adoring public will lap it up. 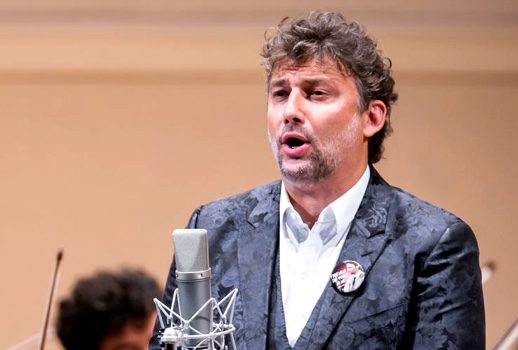 While the Met continues to impatiently await his return after more than four years, Jonas Kaufmann has appeared at Carnegie Hall three times in just over eight months. The most recent occurred Friday when a sold-out house eagerly (if not quite ecstatically) greeted the tenor’s earnest recreation of his 2014 operetta CD You Mean the World to Me.

The program notes (extracted from the CD) took pains to claim that “this would be no hit parade featuring operetta numbers [from 1925 to 1933] but would reflect a coherent concept.” Well perhaps that was the intention, but the roster of nine encores followed four more encores proved to be as dully vapid as it sounds.

What makes a piece an “encore?” In this case, short, melodic, easy-to-digest and quickly forgettable.

As opera’s reigning tenor-superstar Kaufmann can pretty much do whatever he wants and a sizable adoring public will lap it up. Although I hadn’t previously sampled You Mean the World to Me on CD, I had heard some of his equivalent Italian crossover venture Dolce Vita which I found wanting.

The sober Kaufmann quite simply lacks the effortless charm and easygoing persona to put across lighter music. He made his name embodying the intensely suffering heroes of French, Italian and German opera and those remain his forte (and self-conscious piano)!

Friday’s concert started promisingly enough when Kaufmann appeared (to my surprise in white tie and tails) to explain the presence of a large microphone. No, he wasn’t worried about filling the house but he imagined that a mic would promote an intimacy suitable to the low-key romantic (or schmaltzy) arias/songs he’d be performing.

My usual strong qualms about amplification didn’t prove to be warranted as it was skillfully and unobtrusively done. Instead of a sheaf of music on the stand by him his other electronic aide was an iPad to which he rarely referred except during the numbers he performed in English.

His first piece, a paean to Vienna from Kálmán’s Gräfin Maritza, was pleasant enough but the subsequent song, the enterprise’s signature tune composed by tenor Richard Tauber—whose command of this repertoire prompted Kaufmann to make the CD in the first place—proved workaday and unmemorable.

A pattern soon arose of simple-minded “I love you / I love spring / I love kissing / I love love” doggerel lyrics which proved even more banal when sung in English.

The Lehár arias from Paganini, Giuditta and Frasquita were the most pleasing but eventually most everything devolved into a predictable form of a soft confidential murmuring rising to a stentorian exhortation, then a reprise culminating in a show-stopping high note—during which Kaufmann would indulge in his propensity to play with dynamics.

After the intermission the sung works became more pop-ish with a reduced, jazzier accompaniment. One unfortunate feature was that several contained an instrumental bridge during which Kaufmann very awkwardly bobbed along.  But at least he had changed out of his tux into a sleek suit with an open-collared shirt.

No doubt many just wanted more and more Kaufmann but I may have been in the minority in actually looking forward to the many orchestral numbers that dotted the program. Led by Jochen Rieder with swing and verve, the Orchestra of St. Luke’s dazzled in overtures, waltzes and marches by Lehár and others. 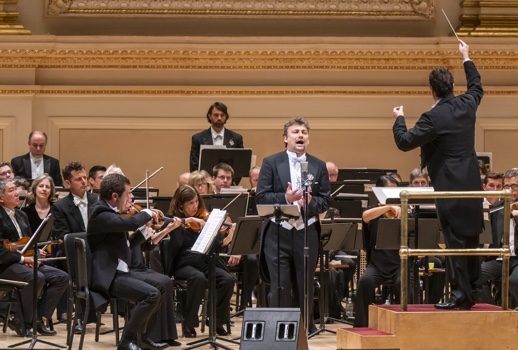 My taste in Viennese operetta tends to the 19th century and a number of these orchestral works reminded me more of that period than the vocal material. Rieder and his band displayed a sparkle and a joie de vivre conspicuously lacking in their guarded and unspontaneous divo.

During the evening my mind drifted back to a solo concert given by Mirella Freni at Avery Fisher Hall in October 1991. Appearances in New York by Freni were never that plentiful even after her return to the Met in 1983 so the place was packed for what turned out to be seven or eight verismo arias (most lasting just 3 or 4 minutes) interspersed with the usual Italian opera orchestral potboilers like the “Intermezzo” from Manon Lescaut or the overture to La Forza del Destino. (I don’t remember precisely what was played though)..

Like Kaufmann’s English version of “Dein ist,” one of her encores was simply a repeat of an earlier aria. In retrospect it was an irritatingly small portion but all in all I recall leaving happy. Despite some intemperate online grousing I’ve seen, I suspect many (or even most) on Friday were more than happy to catch Kaufmann in a program that was after all precisely what was advertised with no “Vesti la giubba” or “E lucevan le stelle” possible.

But I too couldn’t help wishing it might have been instead, say, an evening of French arias from his Opéra CD.

The death of Montserrat Caballé the day after the concert reminded me of her sometimes extraordinarily generous programs. I dug up one for a concert given in Madrid in 1973:

Wow! Other than Cecilia Bartoli, I can’t think of another artist these days who would sing such an extensive program.

My disappointment Friday shouldn’t leave the impression that I’m not a Kaufmann fan.  I’ve been one since he debut here as Alfredo in Traviata in 2006. I’ve made a serious effort to catch him in everything he’s done at the Met including his wonderful recital which also featured “Dein ist mein ganzes Herz” as an encore; one of his two electrifying Don Josés;  as well as his memorable Tamino in probably his final Mozart performances ever. I share a morsel of that Zauberflöte here.

Just for him, I even suffered through that deadly Des McAnuff production of Faust which only made me loathe the opera more.

Despite these three quickly sold-out Carnegie Hall shows, I wonder though if Kaufmann Fever has subsided a bit over the past few years, in New York at least. Many in the audience left before the (real) encores had ended and a glance at the Met website shows rows and rows of unsold seats in the Family Circle—usually the first area in the house to sell out—for Kaufmann’s Fanciulla performances. 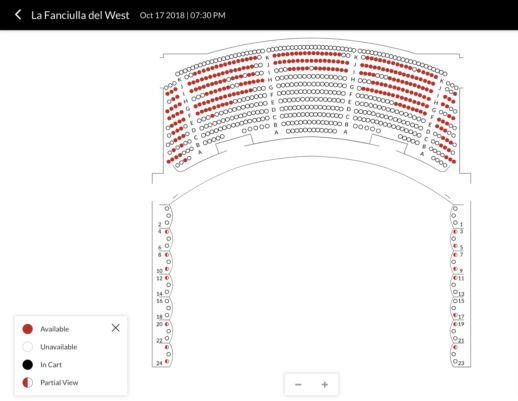 I for one will be there on the 17th for his return and will report back.