It’s surprising to read that, as of this writing, La fanciulla del west has only had 105 performances at the Metropolitan Opera. 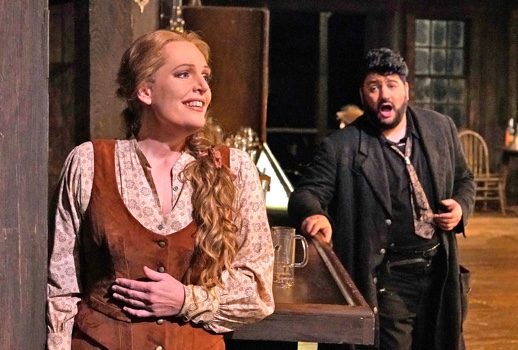 It’s surprising to read that, as of this writing, La fanciulla del west has only had 105 performances at the Metropolitan Opera.

Just compare that amount with the company’s 1,323 performances of La bohème. It raises the question: why doesn’t the opera have a more prominent place in the company’s repertory? One would think that American audiences would cherish the piece because, like Madama Butterfly before it, Fanciulla explores an exotic culture through an old-world, European lens; but this time, the culture is ours.

Similar to Butterfly in several technical ways (both were based on source materials by the American impresario David Belasco), Fanciulla spends a sizeable chunk of its three and a half hour running time establishing setting and character. The first act, especially, is populated with figures, major and minor (pun intended), which gives the audience a sense of time and place.

The effect is kaleidoscopic: a microcosm of a culture exploring the edges of things, investing life and love in chance, searching for precious metal in all the muddle.

Personally, I find Puccini’s score for Fanciulla to be his finest (I don’t think I’m alone in this opinion—I’m looking at you, Andrew Lloyd Webber). Like Butterfly,Puccini evokes landscape and culture through orchestral grandeur and sweep. And he smartly deploys allusion to certain American musical idioms—folk songs and styles—but in less fetishized ways than his Japanese efforts.

But what is most impressive is Puccini’s ability to open up the fraught psychology of his characters. There is something so deeply human and emotionally authentic about this opera— more so, I would argue, than the composer’s ubiquitous works, such as Butterfly, Turandot, and Bohème. 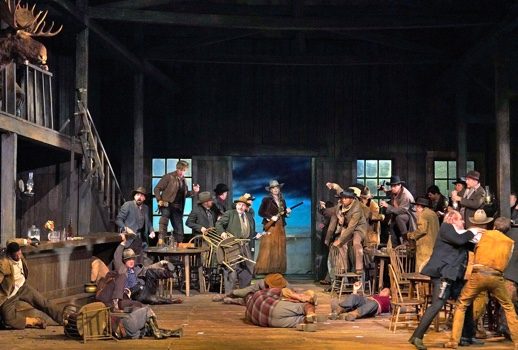 This psychology is distinctly modern. For the opera’s plot is the romance between too highly independent and damaged people, pioneers in both very real and metaphorical dimensions.

Indeed, the opera is a bit queer. Set in the homosocial surroundings of the working class, with a western setting that alludes to cowboys and ranch hands, Minnie’s narrative is one in which the central figure has forgone domestic conscription. She has made alternative choices, leaping into the unknown, demanding freedom at the expense of a certain kind of respectability. She is, in a very real way, a sexual pioneer.

(The theme of pioneering has expansive possibilities—especially when applied to sexual subcultures, ideas only vaguely alluded to in the opera’s text. Tony Kushner picked up on this connection when he made daring comparisons between Mormon pilgrims and cruising gay men in his magnum opus Angels in America. And this theoretical lens draws on many strains of thought, from theorists such as Walter Benjamin, Alfred North Whitehead, Gilles Deleuze, and John Paul Ricco.)

Minnie and Dick are people who occupy the Outside (with a capital O). She lives unattached, in a cabin on the side of a mountain. And he is an outlaw, an infamous bandit.  Because of their renegade social positions, their relationalities are constantly in motion, unsettled, recalcitrantly beyond the boundaries of propriety, in transition and flight.

Jack Rance stands out against their queer fluidity. He is the local sheriff, a cold, calculating figure that represents a sociality devoid of love. He lusts after Minnie, despite her resistance. And when Dick’s lawlessness faces prosecution, it is Minnie who must intervene. In these final scenes, the opera takes on theological dimensions, with Minnie transforming into a loving Christ figure, arguing on the behalf of an undeserving man. And Jehovah is a crowd of bloodthirsty vigilantes, demanding justice.

However, despite my appreciation for the opera’s richness, I understand why it isn’t performed as regularly as the score deserves. Despite the emotional impact of the piece, the central role of Minnie is a grueling sing for any soprano. 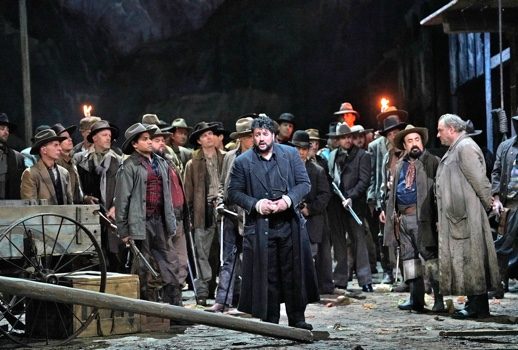 On the first night of this revival, Eva-Maria Westbroek struggled to make it through the evening. Her vocalism in the middle voice was gorgeous: evenly aligned, slightly metallic, and musically phrased. But when required to display dramatic gravitas during the opera’s more highly pitched passages, she seemed to spread her sound, blowing out a thin, shallow shriek.

Where Ms. Westbroek succeeded was as an actress. At first I found her a bit cold. I suppose I expected a more spirited Annie-get-your-gun approach to Minnie. But, her coltish, awkward physicality and aloof demeanor were ideal for the role. Minnie has lived without romance and desire for so long—it makes sense that she doesn’t know how to be in her body. In this respect, I found the artist very touching.

Yusif Eyvazov sang like a god his voice clear, clean, endlessly musical. His Dick Johnson was incredibly charming and sexy (and I say this even though I don’t particularly respond to his media persona—but, frankly no one is good enough for Anna). He sang “Che’ella mi creda” with robust, clarion nobility; it was a definite highlight.

Before the performance began, it was announced from the stage that Zeljko Lucic was sick. The baritone seemed understandably cautious in his approach. But no other defects were noticeable. As Jack Rance, Johnson’s foil and Minnie’s adversary, he radiated menace, smoldering especially during the card scene in Act II.

Marco Armiliato brought his characteristic verve and vigor to a score suited ideally for his artistic sensibilities. The orchestra indulged Puccini’s emotional, evocative writing without over-sentimentalizing it—not an easy task.

Giancarlo del Monaco’s production from 1991 impressed visually  with its towering mountainsides  and evocative saloon interiors. Dramatically, though, it felt a bit conservative. If the company could only find a perfect Minnie (suggestions?) it would be wonderful to see a bolder, more creative production at the house. The text certainly deserves such efforts, especially from the same company that premiered  the opera in 1910.