Shortly before Tuesday’s performance of Salome at La Scala, I did something I rarely do: I took a mirror selfie. 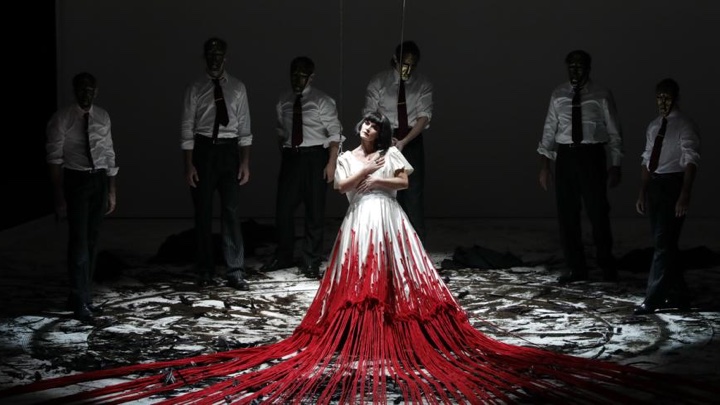 Situating myself between two mirrors in the Ridotto Toscanini, I felt the familiar surprise of completely losing my own sense of self as I angled my phone to capture the infinity of reflections of the massive chandelier with my head allegedly somewhere in in the middle. What exactly is it that exists between two reflective planes, I thought after. Was I looking at myself, a reflection of myself, or nothing at all?

Oscar Wilde, in making the moon, whose paradoxical brilliance (it reflects light though it appears to emanate it) is the primary symbol in the world of his hermetically sealed Salome, puts his characters and his audience in a similarly questioning position of self-annihilation. What power do desired images hold, he urges us to ask, and can we ever bring ourselves to complete empathy with another desiring mind?

Damiano Michieletto, in a revelatory production that premiered (in a somewhat compromised form due to Covid) in 2020 and now arrives in Milan at full force, takes the (literal and metaphorical) reflectiveness of Wilde’s play and uses Strauss’s music to explode its scope to dense, rewarding, and thrilling ends. 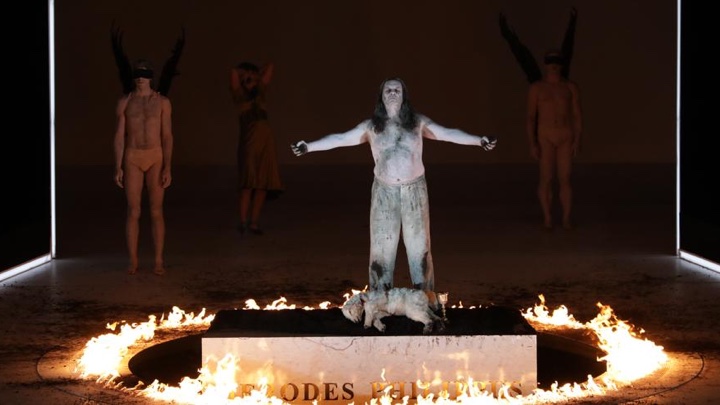 Michieletto places Salome alongside Hamlet and Electra as a family tragedy with an epic, existential panorama and, by providing a child double of Salome who occasionally appears in both episodes of her past and in dialogue with her at present, pours everything into a characterization of the title character informed by the memory of her father’s death and her abuse by Herod rather than inherent perversion.

Yet his mining of the opera doesn’t just stop at unpacking Salome’s baggage—the impact of Jochanaan’s fanatical dogmatism from the cistern at the center of the stage has the unique power to exact literal sway on the characters as Michieletto melds thoughts with physical action.

His voice is what precipitates many of the recollections of the young Salome, as well as the clothes-tearing furor of the five Jews and the massive, reflective orb that Salome, menacing the other characters and evoking the “censer” of Jochanaan’s voice, pushes. 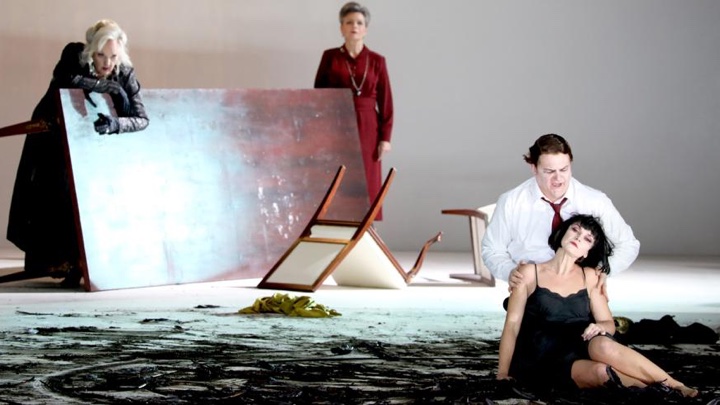 If Jochanaan’s presence, execution, and sanctification (in this production) is a cynical comment on the ability of religion or faith to fix actual problems, it’s equally a rich exchange with Strauss’s score as the music shifts to give way to memory, anger, dogma, and sensuality. When Salome matter-of-factly hurls herself into the void at the center of the stage in the opera’s final second, death is less an object of distant fantasy than it is of familiar nostalgia and a disappearance, maybe even a refuge, into the darkness where the case is closed and there’s no longer light to reflect or be reflected.

At the radiant center of this production is the fearless soprano Vida Mikneviciute as a Salome of noteworthy sincerity and vulnerability. While her tightly coiled voice lacks a distinctive trait and she loses most of her volume at the bottom of her range, she’s an assiduously detailed musician and furious actress in absolute control of her own interpretive capacities.

Whether she pouring out ductile streams of voice when she declares herself to Jochanaan, letting her sound quaver with desire, or berating Herod for his head, Mikneviciute is a Salome of vulnerable tragedy rather than capricious sensuality. Her undoing in the final scene is devastating rather than disgusting as the carnage of the opera catches up to her. She’s the anchor of a production that asks for nearly everything from her and by the end, she showed no signs of fatigue—a stunning and seamless collaboration lived out in real-time. 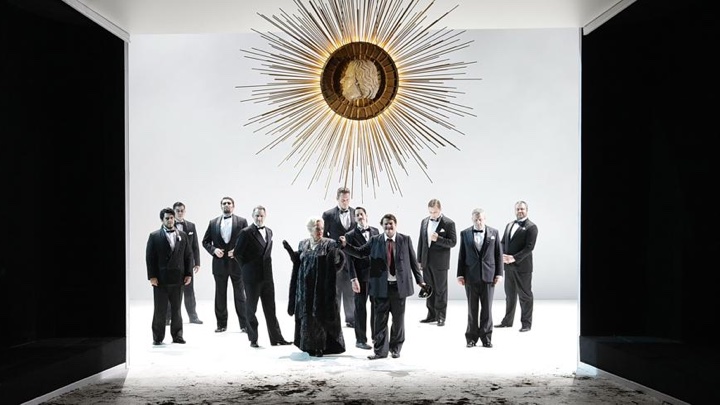 And when I say “collaboration,” I mean with both Michieletto and conductor Axel Kober who conducted the La Scala Orchestra with unique flair. He teased out tense dissonances and fine details across the orchestra, with a particularly strong showing from the percussion, and his sense of pacing was tight his sense of drama was heightened.

Michael Volle as Jochanaan rose from his cistern in a potent monologue that stopped short of declamation, though it was only in talking about the coming of Jesus that his plangent sound satisfyingly flowed. Jochanaan bears a startling realistic slaughtered lamb with him as black-winged angels slowly swarm around him with a chalice. The effectiveness of that image was enhanced by Alessandro Carletti’s subtle shifts in light which filled the greyscale flats (Paolo Fantin) of the stage; Carla Teti’s costumes are both simple and thoughtful.

Linda Watson’s grand and imperious Herodias was well railed against—the only lead reprising her role from the 2021 telecast, her wooly tone and mother-of-the-bride swagger was a decisive counter to her more rawly emotional daughter. Wolfgang Ablinger-Sperrhacke was an uncommonly delicate and neurotic Herod, even more affecting for his outward lack of lechery; his even-tempered high tenor was spit out with bite and anguish.

Sebastian Kohlhepp, a nerdy Narraboth, sang with clarity and sweetness, his feather-light production sailing into the house with ease. He was balanced by Lioba Braun’s sympathetic singing as the Page, here imagined as an older servant that has watched Salome grow up. Her subtlety and frequent presence gave the performance an intimacy that only heightened the sense of tragedy.

Michieletto’s production raises plenty of questions not touched on here while remaining image-driven and atmospheric. Strauss’s score undergirds it all with its stylized savagery, but Michieletto restores a painful yet invigorating humanity to a one-sided story. The result, an improvement beyond the very strong 2021 recording, is towering, and one upon which I will be reflecting for a good long time.