Step aside, Texas: "Everything is bigger at Aida" is the motto of the Met’s second attempt at retiring Sonja Frisell’s colossal production. 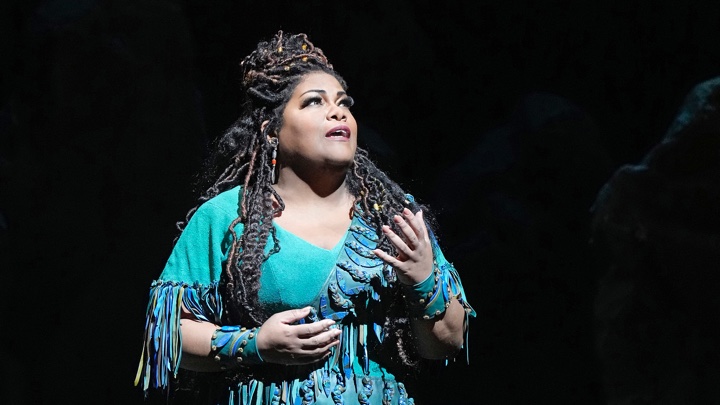 But amongst the big sets full of big statues, big crowds, big chunks of rock and, of course, the outrageously big run-time—a little over four total hours spent in the Metropolitan Opera House—strong but inconsistent vocal performances made for a not-quite-so-big night of music.

Aida is at this point a signature role for Latonia Moore, so it seems fair to guess that her difficult night had something to do with cold and flu season. At times, like in the Act II scene where Aida pleads with first Amneris and then the Gods for mercy, Moore’s performance was magical. Addressed to Amneris, the beautiful unfurling of her voice had an embittered quality, the only weapon left to the refugee princess.

In prayer, that same beautiful line became vulnerable, softened, a reflection of just how alone in the world Aida has become. Elsewhere, however, Moore seemed to struggle with the line of her voice, with “O patria mia” particularly marred by choppiness that betrayed a lack of breath.

Moore’s princess also seemed to struggle to fully connect with her scene partners, who were in more consistent voice but lacked some of the subtlety that characterized her stronger moments. Perhaps this, too, owed to whatever obstacle obscured her voice. 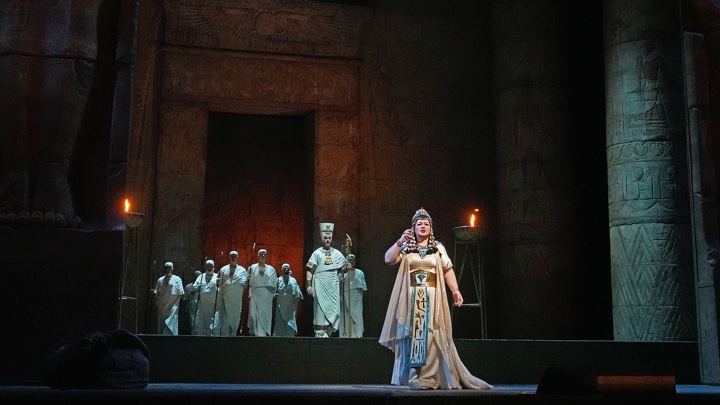 Brian Jagde as Radames, for example, embodied the bigger-is-better approach: his ringing tenor was appealing for its size and clarity, but not particularly inclined towards elegance or nuance.

Olesya Petrova, too, brought an outsized camp ferocity to her Amneris that was by turns captivating—in moments when her voice blazed with thwarted fury—and slightly ridiculous—in her tendency to physically convey turmoil by splaying herself, chest first, against the nearest wall. As Amonasro, George Gagnidze sounded pinched and gruff, and held himself as stiff as he sang.

Cumulatively, therefore, despite many exciting and transcendent moments of singing, the night was plagued by an overall lack of cohesion, presenting a slightly alienated Egypt in which lovers seemed less than fully present while embracing one another, soldiers’ attacks fizzled before contact, and rivals swished their skirts in vague, glancing circles.

On the subject of Egypt as portrayed at the Met, there is, of course, the elephant in the room (though, in this day and age, no longer literally on the stage.) While much has been made of the Met’s ostensible rejection of blackface in its Aida—and the ensuing power struggle with an unrepentantly bronzed Anna Netrebko—the racialized costuming in this production remains something that would shock on any stage but the operatic. 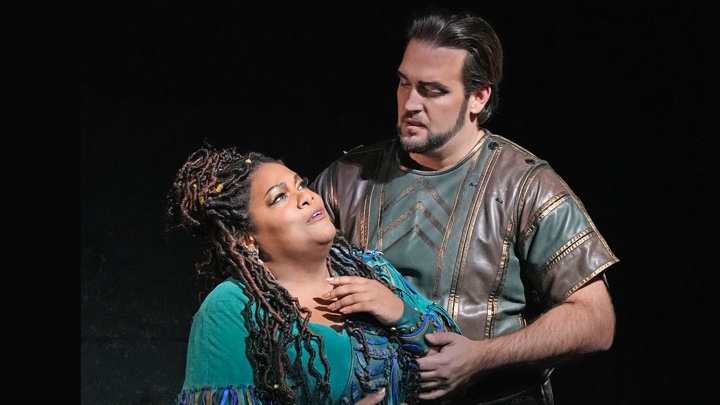 White singers and supers in afro and braid wigs are still, in essence, blackface performers. Even if forgoing blackface makeup, they are putting on physical attributes that lead to the racist policing of Black people in schools, workplaces, and other everyday environments.

Frisell’s Aida and its costume designer, Dada Saligeri, are not uniquely culpable in this regard. The idea that wearing Black hair is still wearing Blackness as a costume is a concept that even the most well-intentioned factions of the white opera world have struggled to grasp. Just last month, Jamie Barton received criticism for an Instagram post asserting her refusal to play Amneris in blackface—posted alongside a photograph in costume that displayed her wig’s heaping tower of black and purple box braids.

In fact, the iffy racial impersonations are only one way among many in which the Met’s Aida is exemplary of its type: stunning, stodgy, monumental, dull, breathtaking, kind of racist—for better or for worse, it’s grand opera at its most, well, grand.

But grandeur depends on a risky kind of stage alchemy; this is a theater of display, whose most impactful moments consistently lie in the revelation of each new set. How could the sets that make the audience gasp when they descend from the ceiling, stately and serene on the cushion of the Met’s enormous hydraulic lifts, continue to elicit gasps after half an hour of watching Amneris drape herself fitfully against one wall and then another? The audience applauds the horses that prance through the triumphal parade—when the horses go away, what remains?

The answer should be the music, the singing, and the performances, that live spark of chemistry and creation that fires life into the (literal) museum piece of Frisell’s Egypt. On Friday, that spark just didn’t ignite. With Moore uncharacteristically off her game and Paolo Carignani‘s conducting serviceable but hardly blazing, Gianni Quaranta’s monumental sets remained just that: monuments.

Gorgeous and inert, the frame of the stage is nothing more than a larger-scale version of the stony proscenium box that, in the end, entombs Radames and Aida.