Alma Deutscher’s quest for beautiful music permeates the score of her Cinderella from the hushed opening of the Overture. 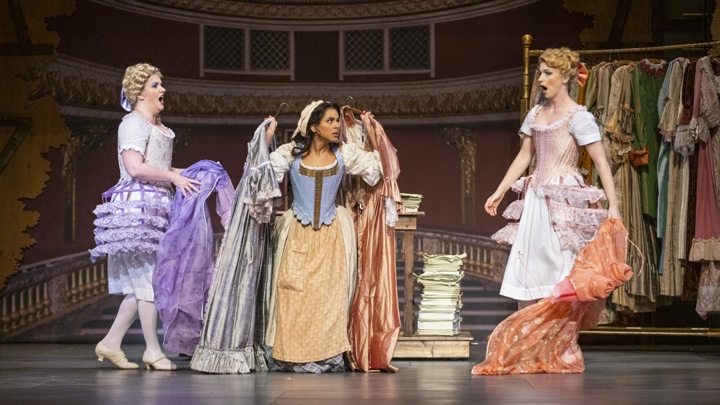 “We come to this place for magic. We come to  heaters to laugh, to cry, to care … “ Just like Nicole Kidman (in that fabulous AMC ads), I experienced “that indescribable feeling” last Sunday at California Theatre watching the final performance of Opera San José revival of Alma Deutscher’s opera Cinderella, conducted by none other than Deutscher herself!

From the moment Deutscher appeared in the pit in her ponytail to lead the orchestra with the confidence of a Maestro or a Maestra many times her age, it was truly a spellbinding moment, sort of watching Dougie Howser, M.D. performing a complicated surgery on an operation table, except that this time, the protagonist was a real-life child prodigy!

Born in England in 2005, Deutscher is a musical genius in every sense of the word; she started playing piano at the age of two, and violin a year later. At seven, she completed a short opera The Sweeper of Dreams. Deutscher started working on Cinderella, based on Charles Perrault’s Cendrillon, when she was 8, and the first version (for 6-people chamber orchestra) premiered in Israel two years later.

In 2016 she reorchestrated the score for 20-people orchestra in time for the Vienna premiere, and in the sold-out collaboration between Opera San José and the Packard Humanities Institute a year later, the big stage version appeared for the first time, complete with 40-people full orchestra, chorus and dancers. (That production can be seen on DVD/Blu-ray.

In 2018 Deutscher and her family moved to Vienna because—as  she put it—“Vienna’s always been my home” ( ), and two years later, she was admitted for conducting degree to the prestigious University of Music and Performing Arts Vienna (MDW), whose alumni included Gustav Mahler, Zubin Mehta (her patron for Cinderella premiere in Vienna), Claudio Abbado and Kirill Petrenko. 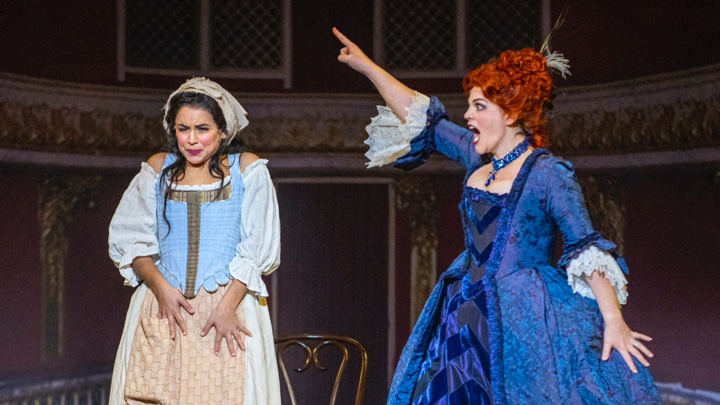 Never missed a beat, Deutscher undertook another revision for Cinderella (this time for a new production at Salzburger Landestheater in 2020) by adding a children chorus and a few allusions to Mozart’s Die Zauberflöte (after all, Emanuel Schikaneder was Salzburger Landestheater’s first Intendant!) Unfortunately, Covid-19 prevented the presentation of the full version there, hence the Opera San José revival served as the premiere of the new version together with Deutscher’s opera conducting debut.

Deutscher’s musical landscape is unabashedly tonal, firmly rooted in Austro-German Romantic tradition (little wonder that she considered Vienna as her musical home). In fact, she had multiple times defended her determination to write “beautiful music”, particularly in rather controversial (at least online) press conference video for the Carinthischer Sommer Music Festival.

In her program notes (cheekily titled “How long does it take to write an opera?”) Deutscher explained that while Cinderella was her favorite fairy-tale, she didn’t like the glass slipper part, as she argued “Why should the size of Cinderella’s feet prove that she’s worthy of the Prince?”

In its place, Deutscher seemed to project herself into the role of Cinderella, as Cinderella was now a composer working in The Stepmother’s opera company (with her Stepsisters as opera divas), The Prince a poet, and The Prince found Cinderella by singing a tune (by way of a leitmotif) that Cinderella left him when the clock struck midnight!

Deutscher’s quest for beautiful music permeates the score of Cinderella, up from the hushed opening of the Overture. She continuously amazed me throughout the opera with the inventiveness of her melody, the lusciousness of her orchestration (she admitted to studying Richard Strauss’ orchestration for the 2020 revision in the SFCV interview above) and the ingenuity of her dramaturgy.

She cleverly peppered the music with delicious waltzes (particularly during the Ball scene) so much so that there were times I thought I was listening to a Johann Strauss II’s Cinderella operetta!

However, in my opinion, deeply embedded in Cinderella’s core there was a beautiful homage to Richard Wagner’s Die Meistersinger von Nürnberg. Not only did Deutscher quote the famous Vorspiel (Prelude) twice in the opera but she also modeled the events after similar situations in Die Meistersinger; there was a singing contest at the Ball where one of the Stepsisters sang Cinderella’s stolen song to a doctor’s prescription (don’t ask!)  to a disastrous effect (same as Beckmesser) and later on Cinderella sang the same tune set to the Prince’s poem and captured his heart. 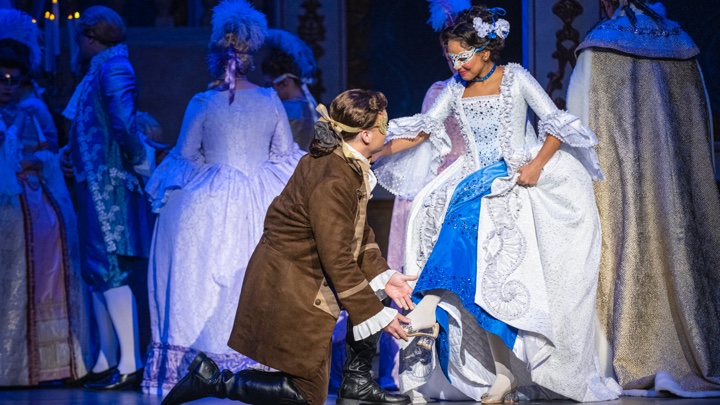 Furthermore, the Prince was a brazen, hot-blooded tenor with tendency to break the rules (just like Walther) and the patriotic national anthem for the Kingdom of Transylvanian (where the story was set, and no connection to the Land of Vampires) seemed to recall Hans Sachs’ final speech in Act 3.

Despite all those influences, the score of Cinderella was unmistakably Deutscher’s own, and the music was beaming with such an unblemished optimism and positivity that, personally, the least convincing part of the opera was when the things went rough, particularly when the clock struck midnight. Deutscher prepped the dramaturgy right—prior to that scene the Stepmother told Cinderella (in a gloriously evil aria a la “Der Hölle Rache”) that “no one wants a beggar girl”—when midnight came and the Prince revealed that he was, indeed, the Prince.

At that point Cinderella remembered what her Stepmother said and fled after leaving the Prince with an incomplete tune as the curtain closed at the end of Act 3. That crucial moment, coupled with the next scene where the Prince was confused and heartbroken, felt rather superficial to me, as if I was told to feel sad instead of being able to feel sad myself.

I also wished that Deutscher would end the opera with the couple’s quiet embrace after they found and complete each other’s song, as her setting for that scene was truly magical compared to the rather overblown and overlong wedding scene that closed the opera (the opera was three hours long in 4 acts and 1 intermission). I thought such ending would be better suited to match her rebellious spirit, although I fully understood why Deutscher felt the need to end this fairy tale in a grand Happily Ever After send-off!

The conductor Deutscher also fared exceptionally well in that performance, as she led the Orchestra in a calm and assured manner while giving cues to the singers and mouthing the words. Deutscher molded each phrase beautifully and shaped each peak meticulously; in her hands the many waltzes sounded like invitations to a dance. 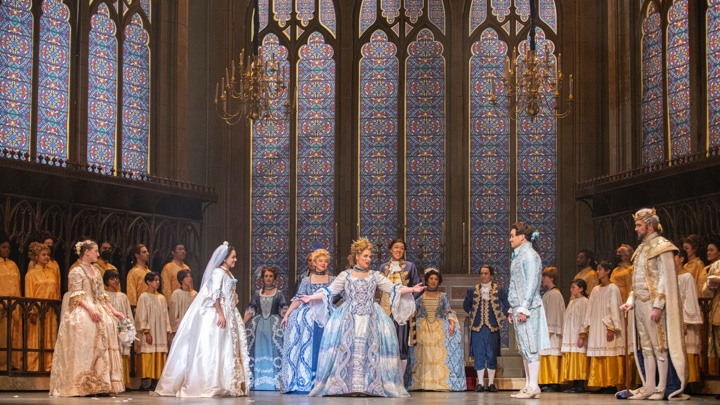 While the score was mostly string driven, I personally loved the emphasis on each section to turn up the drama, for example, when Cinderella complained about having to copy the double-bass part way too many times in the beginning of the opera, the double-bass section answered with an aggressive jagged rhythm, creating some kind of a musical joke!

Obviously, the success of an Opera production couldn’t just depend on a single person. Seen for the first time (stupidly I skipped the 2017 premiere), Brad Dalton’s production was truly a feast for the eyes, both in the whimsical quality of the presentation (that looked like it was lifted straight from storybook pages) and especially in the seamless transitions between scenes (which there were plenty here) that propelled the action to keep moving forward continuously.

The only significant set change break happened between Act 3 and Act 4 (as they prepared for the final wedding scene at the Royal Chapel), and Deutscher took the time to explain that in her version shoes was less important, and even to challenge the audience to compare and contrast the Overture and the prelude to Act 4, as they both represented dawns on the subsequent days.

Scenic designer Steven C. Kemp achieved this high level of efficiency by using multiple layers of movable panels, and each scene was created by systematic combinations of the various panels. The dungy opera house, for example, was created with the backdrop image of the house plus two side panels, while tree trunks from the ceiling and a blue-sky backdrop gave rise to the forest scenes.

The Royal Chapel set was exceptionally marvelous with its tall stained-glass golden windows that gleaming bright when David Lee Cuthbert’s lighting shone through them, giving the audience the feeling of being in a European church. 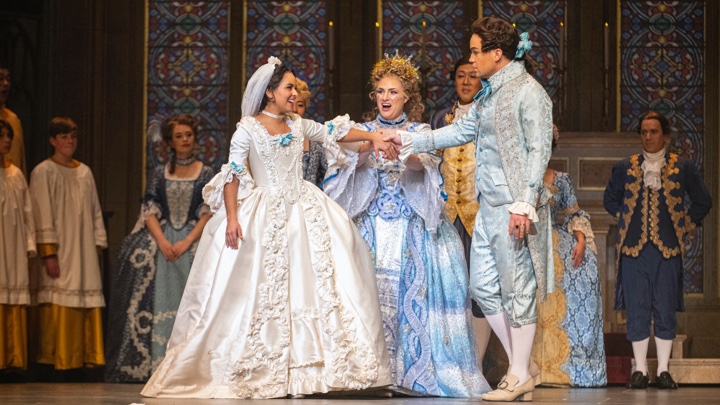 Johann Steigmeier dressed the characters in romantic period costumes, quite similar to the recent San Francisco Opera La Traviata ), albeit the color palette was much more muted (The “Disney princess” influence was much more appropriate here, given the subject matter).

Interestingly, Steigmeier singled out the gowns for The Stepmother and assigned bold saturated colors for them, resulting the Stepmother bear resemblance to the manipulative Mother Gothel from 2010 Disney animation Tangled. Y. Sharon Peng completed the looks with appropriate wigs for each role, and in the Ball scene, choreographer Richard Powers brought élan and grace to the dance that accompanied Deutscher’s delicious Waltz!

Opera San José assembled a youthful cast to bring the story alive in this revival; they were uniformly excellent in their roles and worked well as a team (and with Deutscher). In the title role, Puerto Rican soprano Natalia Santaliz, one of OSJ current Resident Artists, shone as the determined composer ready to make her stamp to the world. With her clear bright sound, she navigated Deutscher’s score with ease even at the loudest moments.

Additionally, she looked absolutely stunning in her wedding dress for the final scene! As her counterpart, Joey Hammond-Leppek’s Prince turned a rather naïve and self-indulgent young man—a man governed only by his passion for poems—and the steely quality of his voice accentuated that characterization. Nevertheless, Hammond-Leppek and Santaliz’ voices blended well together, and their ethereal duet in the last act was definitely a highlight!

Like pretty much any other versions of Cinderella, the roles of the Stepsisters were assigned to a soprano (here named Griselda) and a mezzo (Zibaldona), and they tended to steal the show every time they appeared with their crazy antics and over-the-top singing.

Soprano Stacey Tappan (returning from the 2017 premiere) and mezzo Julia Dawson certainly didn’t disappoint in that department, trading coloratura passages, jabs and even some physical altercations in their duets and trio (with the Stepmother), delighting the audience in return. Soprano Rena Harms brought a sinister undertone in her interpretation as the Stepmother, both in the dark hue of her voice and in her violent tendencies towards Cinderella.

The comprimario roles were handled beautifully as well. Contralto Megan Esther Grey showed off some impressive low notes while dressed like The Pigeon Lady from Home Alone 2 as The Fairy (she did get her chance at ball gown when she officiated the wedding in the end, though!) Bass-baritone Ben Brady impressed as The King; his booming voice had a regal quality to it, perfect for a King who couldn’t wait to abdicate the throne to his son.

Joshua Hughes upped the camp level in the speaking role of The Minister, and the children chorus delightfully charmed the audience as The Fairy’s elves showing the way to Cinderella’s opera house.

All in all, it was truly a magical day at the opera, where everything fell into place perfectly, led by the indomitable spirit of Miss Deutscher. Deutscher herself certainly didn’t waste time after the conclusion of this run, as she next will be busy preparing the world premier of her brand new opera, The Emperor’s New Waltz (inspired by fairy tale The Emperor’s New Clothes) at Salzburger Landestheater on March 4, 2023.

As for me … I intend to follow closely her musical journey as I believe Ms. Deutscher is the real deal. I’m looking forward to hearing and exploring the evolution of her musical landscape throughout the milestones of her life: first love, heartbreak, marriage, childbirth … And lastly, I certainly hope one day I will hear her conducting Die Meistersinger von Nürnberg!