I have a horrible confession. I’ve always judged the quality of an opera largely on the number of dead characters at the finale. 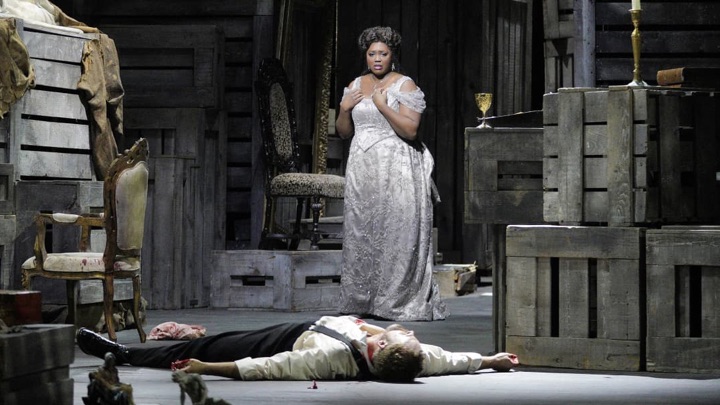 I don’t know why but there’s something bloodthirsty in me that enjoys the lead up to, and subsequent, murder, suicide, execution, succumbing to illness, of the main character(s) that plays such a large part in the operatic universe. Consequently, while I very much enjoy divertissements like La Traviata and La Boheme (sadly with only one deceased in either) operas like Dialogues of the Carmelites (an entire convent sent to the guillotine or Götterdämmerung (the entire world incinerated) send me into absolute raptures.

With nary a surviving principal character at the last act curtain you can only imagine my estimation of Giacomo Puccini’s blood-soaked melodrama Tosca.

So it was with something akin to an undertaker’s glee that I approached the Music Center on Saturday night for the revival of LA Opera’s 2013 production now in its third mounting.

Bunny Christie’s set and costumes were much as I remembered them. A large cement box is configured as a church in a state of renovation in the opening, a cluttered warehouse of stolen art in the second act for Baron Scarpia’s lair, and a prison in the third. The costumes, with one very notable exception, were generally plain and while they were theatrical most are far too unassuming to be called operatic. 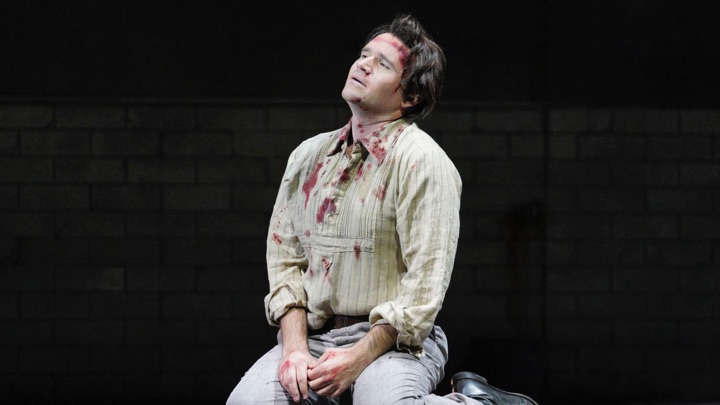 Director John Caird, he of Nicholas Nickleby and Les Miserables fame, returned once again to guide a new set of singers through an overly-fussy staging that too often finds his principles with not enough physical space to carry out the tasks at hand given the amount of music they’ve been allotted to do it in.

Certainly a feeling of growing claustrophobia would be welcome in any staging of this opera but with a cramped church, and then an Act II packed to the very rafters with crates and statuary, there’s precious little space left for the actual machinations of the plot to play out. Atmospheric yes; practical not so much.

It doesn’t seem like there’s enough space at times for the heightened emotionalism and gesture which Tosca is absolutely begging for. The upside is that it does keep the singers forward and easily projects their voices into the infamously parched acoustic of the auditorium of the Dorothy Chandler Pavilion.

There was drama backstage as well when Ukranian conductor Oksana Lyniv sadly had to withdraw from her much anticipated U.S. debut late in the game. Very luckily Louis Lohraseb, a recent alumnus of our young artists program, was pressed into service for his mainstage debut. Already with a list of impressive credits for someone so young it was apparent from his entrance into the pit that he’s also a favorite with the orchestra and he proved immediately why. 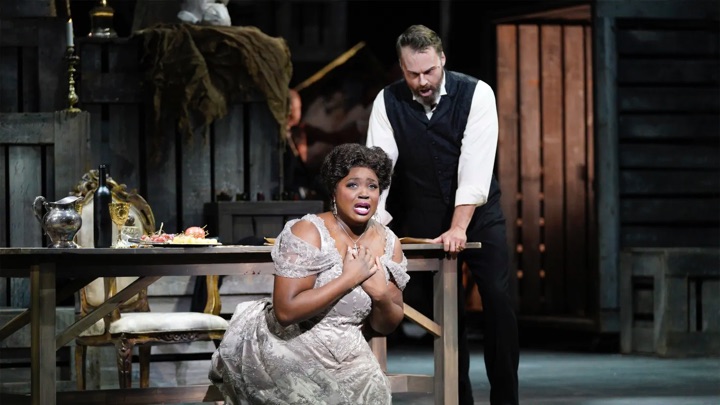 The LA Opera Orchestra veritably erupted and sparkled under his sure-handed guidance. He made deft work of highlighting Puccini’s kaleidoscopic orchestrations and showed a keen understanding of the works musical architecture as well as providing excellent support for his singers. A very few moments of missed stage to pit synchronization aside it was an impressive achievement.

Our cast of singers proved no less adept. Lending the perfect air of totalitarian henchmen to the proceedings were both the Sciarrone of Zachary James and Anthony Leon as a wary and watchful Spoleta. In spite of his commanding height Mr. James managed to skulk magnificently in the background of his scenes moving forward for extra intimidation as needed. Mr. Leon’s sharp tenor was especially welcome in his cynical asides during the Act II interrogation.

I enjoyed Ryan McKinny from his imposing Count Almaviva here in the 2015 revival of Le nozze di Figaro where he was adroit at playing menace with a smile. His first Scarpia proved a little paradoxical in spite of the fact that he has all the right equipment for the role. The noble Baron is a daunting task for any bass-baritone.

Yet he seemed at times to be singing a tad over his weight class in spite of having a long list of Wagnerian credits on his CV. Sporting an artfully graying beard with mustache he certainly had the aristocratic, if not the authoritarian, air down. I’m certain he’ll find more to the role as the run progresses but for now it’s more a strong outline than a nuanced characterization. 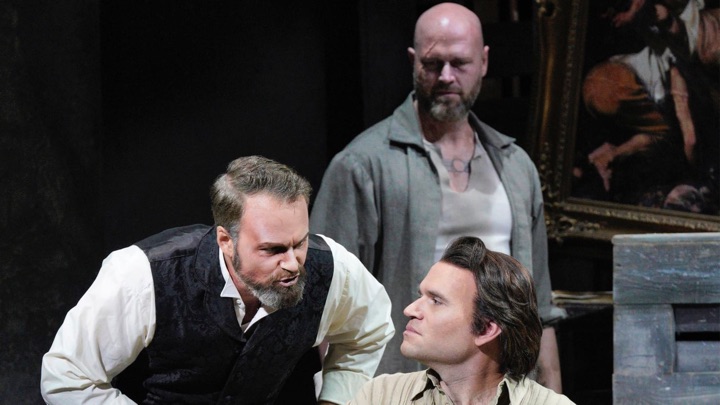 I first reviewed Michael Fabiano on these pages when he appeared in my hometown of Santa Monica at the Broad Stage in concert in 2015.  My estimation of his art has only increased since. Yet this was my first opportunity to see him live in a complete opera having missed his LA Opera debut as the Duke of Mantua three years later.

From the first his Mario Cavaradossi laid claim to the stage with a beautifully nuanced, “Recondita armonia.” Act I features a three-story scaffolding stage right and his positioning on it, well above the stage, only helped bolster his already muscular tenor into the theater bringing the evening’s first prolonged ovation. He was a charming and attentive partner during the duet with his lover Tosca that followed. Meanwhile they gamboled up and down the aforementioned scaffold, singing all the while.

The second act found him making some seriously harrowing offstage noises during his interrogation/torture and then unleashing a nuclear-grade A-sharp “Vittoria!” at the news of Napoleon’s victory over the Austrians. The last Act showed him to best advantage with a deeply moving “E luceven le stelle” that gave him opportunity to brandish a stunning mezza voce on the  ascending phrases.

He was gently chiding and sweet in the duet that followed and there was a surprisingly boyish simplicity in his responses to Tosca’s prompting for the planned execution. Considering the average tenor had two speeds; earnest or tragic, it was an uncommonly nuanced portrayal. 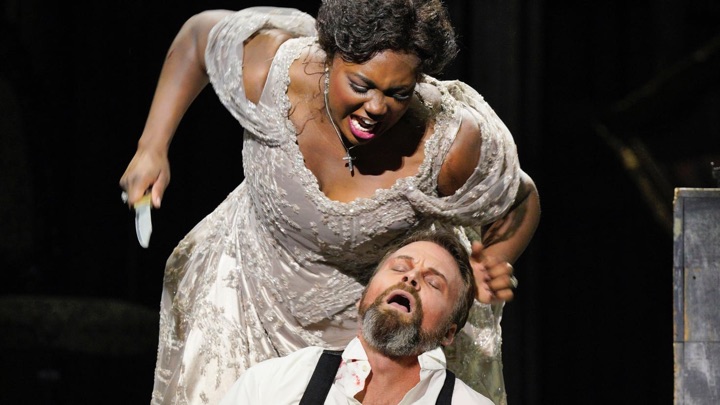 Yet the posters all over the Music Center heralded the much anticipated return of soprano Angel Blue to our stage. Literally having just returned from the Richard Tucker Gala at Carnegie Hall last weekend, having won their highest award, then playing opera’s diva ultimo to a hometown audience would test anyone’s nerve. If she had any they certainly weren’t in evidence Saturday night.

Her Floria Tosca was nothing less than a triumph and the kind of singing you only dream about hearing in this role. It’s a soft-grained instrument with a sumptuous and easy top that has a delicious core sound. Her attention to detail was well-nigh flawless with all the little nuances and grace notes Puccini wrote into the role. Most especially during the two love duets she was particularly fetching.

The amplitude of her lyric-spinto was breathtaking and its pleasures were many. She took the “Vissi d’arte” in the second act at such a stately tempo I started to fear for her breath until she thundered out a glorious penultimate phrase followed by some exquisite shading down for the last line. Gooseflesh.

Her characterization was straightforward and sincere with no pretension or guile in evidence. She handled the many parlando passages in the role, a veritable soprano’s litmus test, with imagination and refinement. Balancing on that magic tightrope of melodrama with nothing overdone or underdone.

Part of this tricky staging also involves a more complicated than usual finale for our soprano which she brought off with aplomb. She also gets to wear one of the all-time great Tosca gowns designed in pearl gray and liberally tricked out with so many sparkles you’d think it came with batteries.

Musically it was a thrilling evening and to hear Tosca so opulently sung is a great treat that shouldn’t be missed. Five performances remain through the 10 December and even I may return for a second visit.