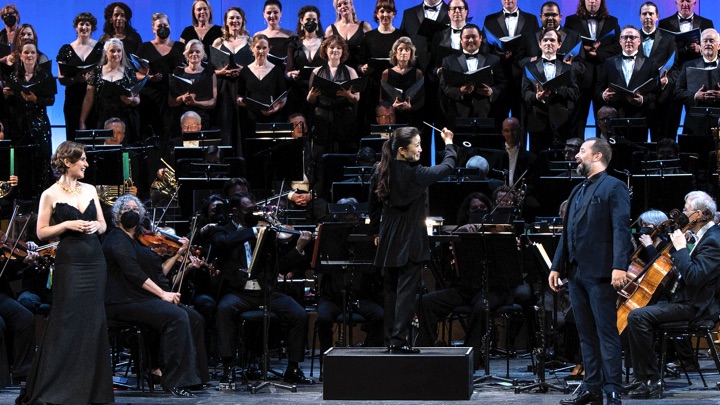 In an interview conducted in the beginning of the 2021-22 Season, she detailed her plans for SF Opera, especially to conduct one Verdi and one Wagner opera each season as well as cultivating the contemporary repertoire.

On the subject of Giuseppe Verdi, she said “The reason I picked Verdi among the Italian repertoire—not Puccini, but Verdi; I love every composer—is because Verdi is something I can build my relationship with the orchestra with.” Therefore, it wasn’t surprising that she chose to end her first season with a concert dedicated to the vast works of Verdi, to give a preview of what to come in the following seasons.

In its first 99 seasons, San Francisco Opera presented 16 of Verdi’s 26 operas, with Rigoletto and La Traviata competing for the title of the most performed Verdi operas (37 seasons each, and La Traviata will win next season when it will be presented as the first in Kim’s multi-year Verdi seasons).

Among the omissions, the most glaring ones included 1844 I Lombardi alla prima crociata, 1845 I due Foscari (which was presented by the local company West Bay Opera in 2019 and reviewed here, 1846 Giovanna d’Arco and 1850 Stiffelio.

Many leading artists made their US debuts at War Memorial in Verdi’s operas – notably Renata Tebaldi and Mario del Monaco in 1950 Aida – and  many more debuted Verdi roles here, among others, Marilyn Horne as Eboli, Leontyne Price (as Aida and Amelia), Luciano Pavarotti (as Radames, Manrico and Riccardo) and Joan Sutherland (as Leonora). 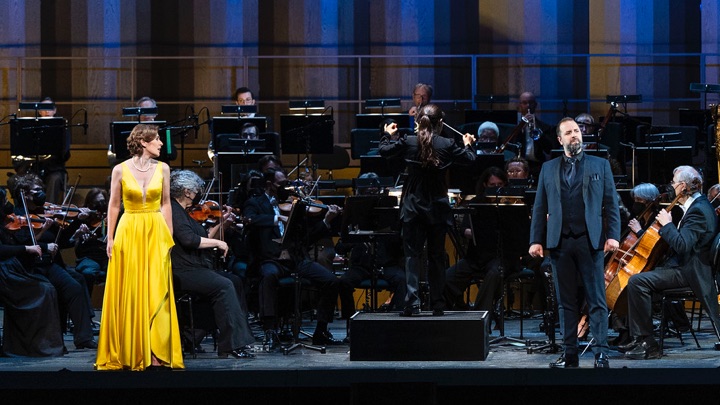 The significance of the Thursday concert was further accentuated by having Matthew Shilvock, SF Opera Tad and Diane Taube General Director, acting as the MC and giving the audience descriptions of the pieces that they were about to hear. Shilvock also tirelessly throughout the night reminded the audience about the importance of having Kim as our Music Director and her first season amidst the pandemic. All this praise, combined with the impending inner and After-Party scheduled afterwards, permeated the proceedings with a sense of festivity.

“Formal” was also the word I would use to characterize Kim’s music-making on stage. Don’t get wrong, everything on stage on Thursday was immaculate, from the orchestra playing with its perfectly shaped phrases, the chorus (prepared by John Keene) pristine singing to the quartet of lovely soloists.

I personally prefer my Verdi to be blazing red-hot, bloodied and battered, you-only-live-once kind of things, because after all, those (characters) were people who sacrificed everything for love and freedom and justice. Unfortunately, those charged emotions that I came to expect from any Verdi performances felt lacking from this particular concert. It was rather ironic that there were times that I thought Shilvock’s remarks were more passionate than the performances that followed!

I felt that the opera selection was also done to accommodate the soloists, particularly of husband-wife Canadian baritone Etienne Dupuis and Australian soprano Nicole Car, who were both mesmerizing in this summer Don Giovanni (). Car sang an acclaimed Luisa Miller in Melbourne six years ago, and Dupuis brought down the house at the Metropolitan Opera presentation of Don Carlos in March. Dupuis and Car are both also scheduled to make role debuts with Il Trovatore in Montreal this fall! 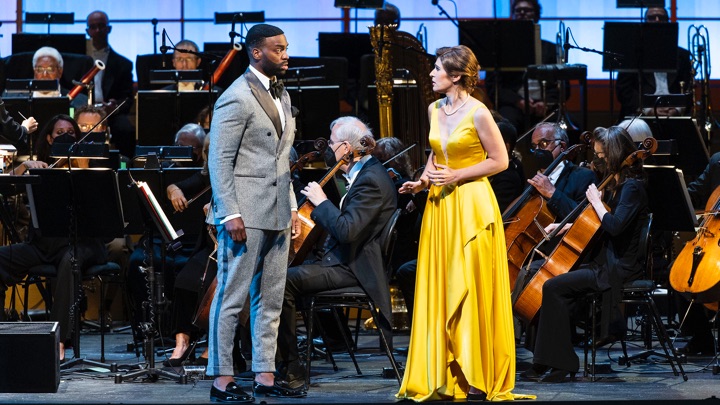 It was unfortunate that SF Opera lost their scheduled tenor, Arturo Chacón Cruz, due to bilateral ear infection merely six days prior to Thursday’s concert. The last-minute changes obviously impacted the song selections, particularly in Don Carlo section, where my companion pointed out that they could have inserted a duet or two to beef it up.

After a leisurely paced Overture of Luisa Miller, the night began with the confrontation scene between Luisa and Wurm from Act 2, with Car singing Luisa and Soloman Howard as Wurm respectively. Car took a while to warm up, while Howard sounded almost too dignified to be the villainous Wurm, making the scene seem a little underpowered. To be completely honest, I was pretty puzzled with the choice of Luisa Miller as concert opener, as I thought there were other Verdi operas – especially Nabucco (with its rousing Overture and that chorus) – would work better in its place instead.

The arrival of the “Anvil Chorus” from Il Trovatore roused the audience and provided them with one of the highlights, as the SF Chorus sounded bright and glorious, fully supported by the orchestra in well-paced manner. It was followed subsequently by Leonora’s aria “Tacea la notte” from Act 1 (aided by Mikayla Sager), Conte di Luna’s “Il balen del suo sorriso” from Act 2 and the duet “Mira di acerbe lagrime” from the last act.

As Leonora, Car sounded a tad lighter from the usual interpreters, although she navigated the coloratura phrases of “Di tale amor” beautifully. For Dupuis, I couldn’t help thinking that his Conte di Luna was still a work in progress, particularly in his characterization, as there was some tentativeness in his delivery. Nevertheless, the duet provided the audience with a rousing ending before the intermission, and the audience cheered heartily.

After intermission, the Don Carlo section contributed the best and the worst performances of the night. I was disappointed with the auto-da-fé scene that opened the section. Verdi painstakingly detailed the juxtaposition of the Chorus of the People and the Friars and the irony between each verse in his orchestration, and somehow this rendition didn’t quite capture much of those horrors and irony.

Interestingly, it was followed by what accounted to the true highlight of the night, the seldom-performed Ballet Music from 1867 Paris version Don Carlos. Shilvock informed the audience this was the first time ever the piece heard on War Memorial stage (even if Don Carlo  had been presented ten  times, including two of French version) prior to the performance, and that sense of discovery imbued the orchestra with grace and elan. Every phrase was lovingly molded, every nuance carefully captured, and the piece moved in almost balletic poise.

Dupuis gave a glimpse of what made his Rodrigo at the Met so mesmerizing with his dying aria “O Carlo, ascolta”. Here he truly embodied the role wholeheartedly, and his tender delivery, complete with beautiful pianissimi, made a completely devastating scene that the audience responded enthusiastically. Car, too, stepped up her game for the final aria of the night, Elisabetta’ “Tu che le vanità”, where her voice sounded pure and clear, and the high notes shimmering bright.

To compensate the lack of ensemble pieces in the second half, SF Opera decided to do an encore of “Brindisi” from La Traviata, with Dupuis taking the tenor role and all the soloists presented on stage. This proved to be an audience favorite, especially since Dupuis and Car played off each stage wonderfully, ended up with a kiss!

All in all, it was a great concert, even if it was a little bit short of being exceptional. Nevertheless, I was excited at the probability of annual Verdi (and Wagner!) presentations, and I’m looking forward to experiencing them all at War Memorial stage. Here’s hoping that more of those ten little known Verdi operas will make SF opera premieres!