West Bay Opera’s sterling production of Verdi’s I due Foscari played over the last two weekends. 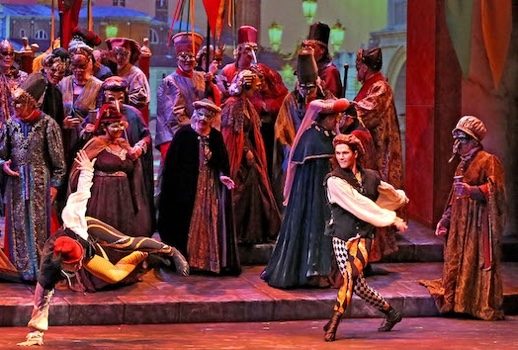 A wise man used to say “Beauty is everywhere if you look hard enough”. So is grand opera apparently, as demonstrated by West Bay Opera’s sterling production of Verdi’s I due Foscari that played over the last two weekends, and I caught the last performance on Sunday (2/24) at Lucie Stern Theatre in Palo Alto.

Now in 63rd season, West Bay Opera – the second oldest continuously running opera company in California – continues to flourish to provide Bay Area with “a taste of Grand Opera in the heart of Silicon Valley”, as their tagline says. They truly scored a major coup with this little-known early Verdi opera, billed as the Bay Area premiere (!)

José Luis Moscovich, West Bay Opera’s general director and conductor for this performance, specifically detailed the motivation behind his decision to mount this little-known opera.

It’s the story of how the ruler of the most successful late medieval empire in Europe felt inescapably bound by his obligation to uphold the laws and therefore the institutional order that made the Venetian empire so successful to begin with. To the point of sacrificing his own family to it.

It will not escape the thoughtful members of the audience that this piece stands in stark contrast to what we witness today: the use of the office in precisely the opposite way, to provide undue advantage to family and friends at the peril of the institutions of the empire, which have enabled the prosperity and civilization we enjoy. They’ll get that and some dynamite Verdi tunes to swing to, sung by an international-level cast. What more can they expect for the price of admission?

My interest in the show was piqued by the fact that it was Bay Area premiere for a Verdi opera! However, I wasn’t prepared for the splendor and grandeur that greeted me at the intimate 400-seats Lucie Stern Theatre. I always marvel at the creativity level of many Bay Area opera directors while working with limited budgets, and director Richard Harrell was certainly no exception.

He, working with a very talented creative team, transported the audience back to 15th century Venice using the simplest possible sets and stage props. Furthermore, I loved how he directed the traffic on stage; at no time the stage felt crowded at all, even when there were more than 30 people there!

Harrell got a particularly big help by the Projection Manager Frédéric O. Boulay. While I normally didn’t enjoy productions that were too depended on projections per se, what Boulay did here was truly magical.

He used the projection tastefully to expand the stage during the scenes inside the Doge’s Palace, and to denote specific locations in Venice. What was truly striking to me was that Boulay used the face of the Lion of Venice as a sort of visual leitmotif throughout the whole opera.

While indoors, the projection focused on the gold-plated lion’s head ornament of the Doge’s Palace, outdoors the famous Lion of Venice at Piazza San Marco, and in the dungeon scene – a pure genius by the way – the lion’s head was carved on the wall, from where the ghost of Carmagnole in Act 2 was superimposed with!

Callie Floor spared no expense in the costume department, as she dressed the singers in elaborate period-specific clothes. I liked that she dressed exactly 10 guys in red as the Council of Ten, and the rest of the chorus was in black (a little thing that was important for OCD minds like me). The Doge’s garments were specifically elaborate, not only did he have his golden robe, he even wore his corno ducale, with a camauro underneath it!

Peter Crompton’s set was simple but did the job efficiently. I particularly loved Shirley Benson’s props for Act 3, where with simple poles and robes, combined with Boulay’s imagery, truly suggested the loading dock at Piazza San Marco.

Obviously, a great production of any operas would ultimately depend on the musicality level; and here was where it truly shone. I was warned prior to the performance that all the leads were in various states of ill health ever since the opening night the week prior.

Lucky for me, they all showed no visible signs of distress for that last performance.

Tenor Nathan Granner led the pack with his heroic performance as Jacopo. His bright, ringing tone was round yet adaptable to the ever-changing modes in his arias; from anger, sadness, resignation, to hopelessness.

Although he did sound a little strained at the top of “Odio solo ed odio atroce”, he recovered quickly and went from strength to strength, culminating in absolutely stunning “Nel tuo paterno amplesso” and the subsequent heartbreaking trio in Act 2.

In that interview, Moscovich mentioned that he “thinks he has found probably the best Lucrezia anywhere today in Christina Major,” and based on this performance, I would agree with him.  Lucrezia was created for Marianna Barbieri-Nini, who subsequently premiered Lady Macbeth as well.

The role required a spinto soprano, having agility of a lyric soprano yet capable of dramatic climaxes without strain. Major demonstrated all those in her singing, although I sensed a little hardness at the very top in the beginning. However, the voice warmed up considerably for Act 2 and sounded glorious from then on.

As the central role, baritone Jason Duika was the most problematic of the three leads. While his voice gained strength and some warmth compared to the reports from the previous week, unfortunately it was still lacking legato needed for the role. However, I really admired his perseverance, and he showed great acting as the father torn between family and duty.

I had to point out that the trio from Act 2 truly sounded divine and very heartfelt! In fact, I could boldly claim that it would be hard to top that Act 2 alone!

The comprimario roles were all handled efficiently, particularly Ben Brady’s devilish Loredano. The chorus sang delightfully, particularly the men’s chorus that truly represented the Council of Ten. And as if all those still weren’t enough, Harrell brought in a pair of dancers for the opening scene of Act 3, just to add the merriment!

Last but definitely not the least, this whole project was definitely a labor of love for Moscovich, who saw the Argentinian premiere of this piece when he was 12 or 13 and made deep impression in him.

The reduced orchestration came fully alive under his baton, each melody was shaped lovingly. Moscovich was also fully supportive of his singers, while not afraid to keep the proceedings moving. In other words, he really kept the “grand” in the grand opera!