The second act of Dream of the Red Chamber reached the apex and provided the audience with soul-stirring fulfillment. 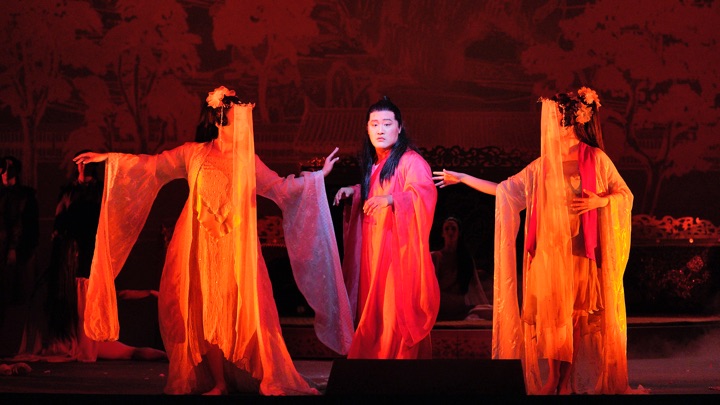 Since presenting its first world premiere in 1961 (Norman Dello Joio‘s Blood Moon), San Francisco Opera has always made it part of its mission to present new operas in their seasons, as they have commissioned or co-commissioned more than 30 operas throughout the years.

The previous General Director (now SF Opera General Director Emeritus) David Gockley himself was responsible for about one-third of that number during his ten year tenure. One of the last things he worked on, and then realized by the current General Director Matthew Shilvock in his first season, was the world premiere of Bright Sheng and David Henry Hwang’s Dream of the Red Chamber on September 10, 2016.

Following the sold-out world premiere, Dream of the Red Chamber (abbreviated Dream subsequently) made history when it became the first American opera to tour China, with performances in Hong Kong, Beijing, Changsha and Wuhan, merely six months afterwards. This month—almost six years of that date—Dream made another history as the first SF Opera’s commissioned works to be revived at the War Memorial Opera House in its original production, opened last Tuesday June 14  and was seen Friday.

Dream was based on the colossal 18th century novel of the same name (Honglou Meng in Mandarin) of Cao Xueqin, one of the four great Classical novels of in Chinese literature. From this work, more than 2000 pages long and featuring over 40 major characters, librettist Hwang and composer Sheng had the daunting task to distill a two-and-a-half-hour opera.

They ended up in retaining just seven characters, focusing only on the love triangle between predestined soulmates Bao Yu—of the Jia family—and his poor but brilliant cousin Dai Yu, complicated by the illustrious and wealthy Bao Chai of the Xue family. It’s a story of the implications of love and filial piety, central in most Chinese families, against the backdrop of power, wealth and eventually, tyranny. To enhance the metaphysical aspect of the opera, Hwang decided to add another non-singing character, Monk/Dreamer, that framed the opera and gave commentaries on the proceedings. 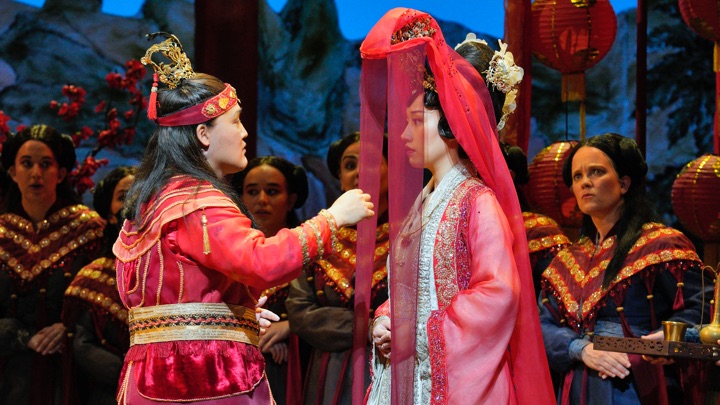 It took time to introduce the seven characters, and the continuous expositions of those roles in Act 1 resulted in that act felt static and episodic, one of the biggest complaints during the premiere. For this revival, Sheng made several small cuts to the opera, including removing an aria from Act 1. It did help to move the act faster this time, although Act 1 still felt inherently episodic and slow-moving.

Nevertheless, the power and strength of the opera lay in the action-packed and emotionally draining Act 2, starting with the death of the matriarch, the wedding deception and ending with the confiscation of the properties of the Jia and Xue clans and the burning of the revered Red Chamber. In this act the opera reached the apex and provided the audience with soul-stirring fulfillment.

Personally, I would prefer to dispense with the framing Monk/Dreamer, who had the uncanny habit of appearing and (worse) saying the weird things at the absolutely wrong time. Even the realization that (spoiler alert) he was Bao Yu’s older self at the final scene didn’t contribute much to the whole story, methinks. Besides, I never really enjoy having the moral of a story being spelled out to me honestly; I’d rather make my own conclusions.

Nevertheless, the show that I saw on War Memorial stage last Friday was still one of the most opulent productions there ever! Tim Yip (of Crouching Tiger, Hidden Dragon fame) created a jaw-dropping backdrop system that represented villages on a hill and dressed the singers in the most lavish fashion. If at times the staging reminded me of the Franco Zeffirelli’s famous Turandot, Yip exercised a lot of restraint in both the sets and costumes, resulting in a grand and elegant spectacle rather than overblown one!

In his Director’s Note, acclaimed director Lai recollected that

Over the years, I usually direct my own work as playwright, so whatever conflicts arise between writer and director are reconciled internally. Working with David and Bright posed potential occupational hazards, for we are all strong-minded and proudly assured of ourselves in our own ways. The process turned out to be a joy, filled with mutual respect and admiration. We discussed together the particular staging of key dramatic moments and any proposed libretto and musical changes. Our relationship was such that I was even emboldened to request that Bright add music in certain places in order to give me more time to build a meaningful theatrical image or transition.

This symbiotic relationship between the composer, librettist and the director truly manifested on stage, where each scene appeared and moved naturally, in a very well-choreographed manner. I could really see what he meant with the added music in place of those big set changes, so that barely any time was wasted in between scenes.

Musically, the performance on Friday operated on such a high level as well. Sheng said the following of the 2022 performances:

The Pandemic also afforded us a longer time to delve further into the revision of the opera. We trimmed some part of the opera, added some part and rewrote another. This is the third revision of DRC and, as they say, three is a charm! We are confident that with our mostly new cast, who brings us very exciting new energy, and the returning cast, who has gotten the characters even deeper, it will be a very refreshing experience for the audience, especially for those who saw it in 2016 and enjoyed it.

This “exciting new energy” of the new cast was particularly led by the Singaporean conductor, Darrell Ang, who brought explosive energy in his reading of the score, propelling the actions particularly in Act 2. Ang, however, was also sensitive to his singers, as barely anyone of the cast got drowned by the orchestra. The San Francisco Opera Chorus worked well in various roles to beef up the opera, although their diction somehow left something to be desired, as it was pretty hard to figure out what they were singing.

As the sole male voice in the whole drama, Korean tenor Konu Kim made an impressive company debut. Bao Yu in this opera was pretty hard to pull off, as he spent the whole Act 1 being a reckless spoiled brat; it wasn’t till Act 2 where he underwent a lot of emotional turbulence that required great acting.

In my opinion, Kim was at his best during the lengthy Act 1, where his bright timber and ease of high notes convincingly portrayed youthfulness and uninhibitedness. Even if his character’s rage and despair were less persuasive in Act 2, the voice shone through, and he is definitely a tenor to watch in the future!

Whether one liked it or not, Hwang definitely molded the opera into a feminist play, so naturally the female voices carried out the task of moving the story. And what a mighty ensemble of female singers that San Francisco Opera assembled for this! In her Company debut, Chinese soprano Meigui Zhang was perfectly casted as the brilliant but frail Dai Yu as she embodied the role wholeheartedly; there wasn’t a moment that you doubted she weren’t Dai Yu! Her glowing instrument sounded pure and clear, and her portrayal was hard to fault. 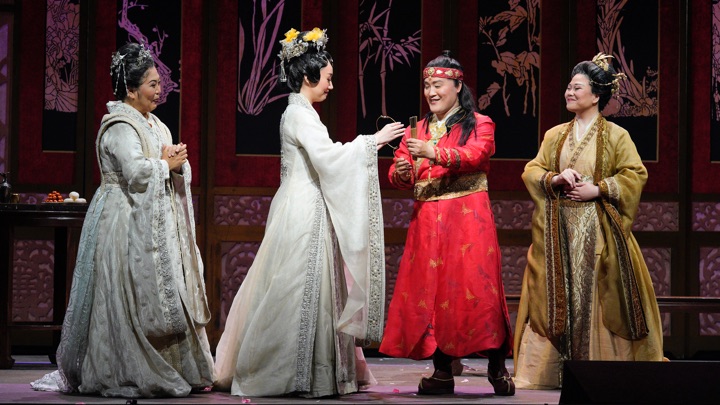 Chinese soprano Hongni Wu, who will originate the role of Comrade Chin in Hwang’s world premiere M. Butterfly at Santa Fe Opera this summer, completed the love triangle with her unrelenting depiction of Bao Chai. That night Wu took a while to warm up, but eventually she gave us a sly take on the role. There was a steely quality to her voice that matched her portrayal; hers was a full-fledged woman who fully knew her worth, yet frustratingly still couldn’t capture the heart of the man-child Bao Yu!

As the sole 2016 premiere’s veteran of the night, Hyona Kim gained deep understanding of the tormented role of Lady Wang, Bao Yu’s mother. I saw a lot of parallels between Lady Wang and Kostelni?ka of Leoš Janá?ek’s celebrated Jen?fa, in which both mothers thought they did their best for their families by committing the most dreadful things! Kim’s powerful depiction made Lady Wang much less of an antagonist, but more of an over-protective mother, even when Lady Wang lost an aria in this revival!

I was quite bummed not to see soprano Karen Chiang-ling Ho—who would have been the sole cast in every single performance of Dream had she sang that night—as Princess Jia (Bao Yu’s sister and the Emperor’s concubine); she had been one of the highlights during the world premiere.

All in all, it was a truly wonderful night at the Opera, with amazing cast and beautiful staging. I was pretty disheartened to see many empty seats in the house last Friday, which I hoped due to the Golden State Warriors’ winning the NBA Championship the day prior! Let’s hope that this wouldn’t curb San Francisco Opera’s desires to revisit many of their wonderful past commissions (such as Dead Man Walking)!